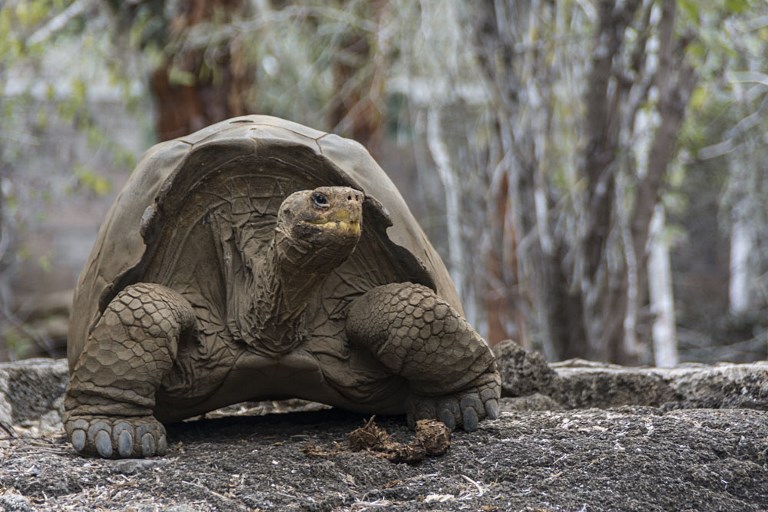 QUITO, Ecuador – Conservationists have released 155 giant tortoises on an island in the Galapagos to help replace a similar species that died out 150 years ago, officials aid Thursday.

The tortoises, each aged around 10-12 years old, were raised at the Fausto Llerena breeding center and are part of a program to repopulate the island at the center of the Pacific archipelago.

Also known as the Espanola Giant Tortoise, the newly freed reptiles are a similar species to the Chelonoidis spp, which are today extinct.

They originally come from Espanola Island, also known as Hood Island, in the far southeast of the Galapagos chain.

“The tortoises that have been released carry a microchip under their skin with a permanent number attached to make it easier to track them,” said Jorge Carrion, the head of the Galapagos National Park.

The newly released tortoises join 394 others which were set free on the 24.7 square kilometer island.

The program, run by the national park service and the NGO Galapagos Conservancy, is due to run until 2026.

The giant tortoises are “engineers of the ecosystem” because they help spread vegetation in their natural habitat, said Carrion.

The first of the creatures was released on to the island in 2015, said Washington Tapia, in charge of Galapagos Conservancy’s giant turtle project.

The animals are “between 10 and 12 years old and should start to reproduce in the next five to seven years,” he said.

Located some 600 miles off the coast of South America, the islands belong to Ecuador and are classified as a UNESCO World Heritage Site.

The islands are best known for their unique flora and fauna, which inspired naturalist Charles Darwin to write his landmark 1859 study on evolution, “The Origin of Species.”

Giant tortoises are believed to have arrived on the remote volcanic island chain about three to four million years ago, borne by ocean currents. With no natural predators, they spread across the islands and split into different species.

However, in the 19th century their population was devastated by sailors who used them as storable fresh meat on long ocean voyages, and by invasive rats, cats and ants which ate their eggs.

Last week, conservationists announced they had discovered a giant tortoise from a species thought to have become extinct more than a century ago. – Rappler.com