Jun 8, 2019 11:00 AM PHT
Facebook Twitter Copy URL
Copied
It blows the mind to think we might see other planets and even moons in the process of formation, using the biggest telescope in the world. It’s just another reminder of how small and insignificant we really are. 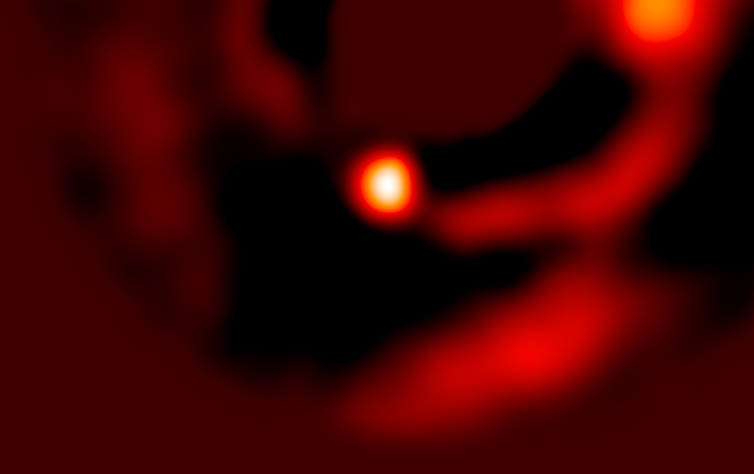 When Italian astronomer Galileo Galilei first spotted 4 moons of Jupiter through a telescope, he realized that not everything goes around the Earth, as was the prevailing theory in 1610.

The presumed origin of the Galilean moons was in a swirling circumplanetary disc of gas and dust around the newborn Jupiter.

But direct evidence of circumplanetary discs made of gas and dust eluded astronomers, despite an intensive search. Until now.

Read more: How we found a white dwarf – a stellar corpse – by accident

We detected the first evidence for one of these discs in the form of an infrared glow around a baby planet called PDS 70 b, the details published in two papers this week.

It was not easy to find

The discovery required one of the largest telescopes on Earth (the creatively named Very Large Telescope in Chile), a sophisticated spectrograph (SINFONI) to acquire images at different wavelengths in the infrared, and new image-processing algorithms developed specifically for the dataset we gathered.

The newborn planet orbits a star called PDS 70, which is young and relatively close to us (a trifling 369 light years away) in what is known as the Upper Centaurus–Lupus star-forming region of the Milky Way.

Apart from its youth and proximity, the main reason we chose to study PDS 70 is that previous observations showed a large hole or gap in the disc of gas and dust surrounding the star.

This hole, covering an area almost the size of our Solar System, hints at the presence of planets orbiting the star, which are responsible for carving away the disc material. 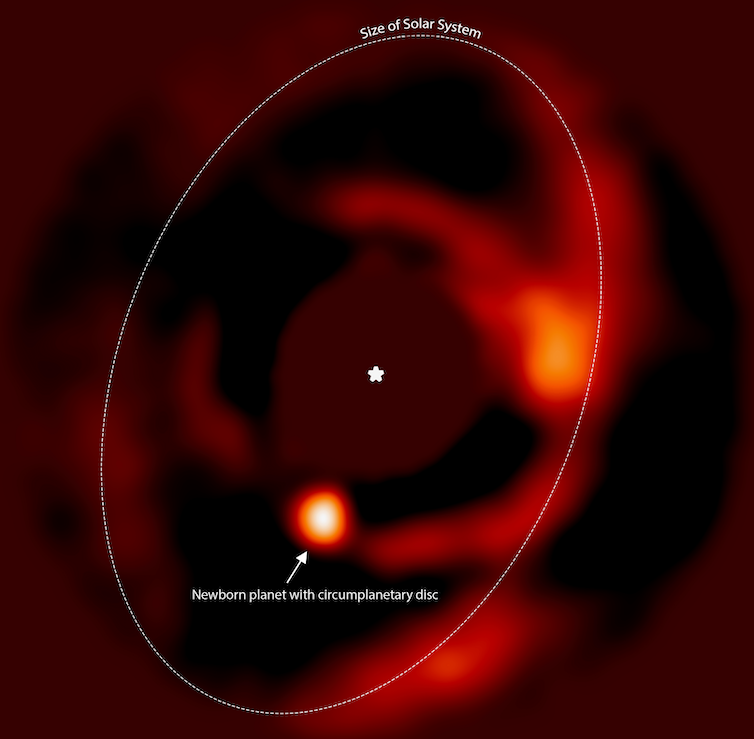 The new images we gathered show that the gap is not entirely empty.

They reveal arcs and spirals of dusty material, and a bright blob, which had first been detected and interpreted as a baby planet in two studies published last year.

And it’s a whopper planet – about 10 times heavier than Jupiter.

What is new in our analysis is that we probed infrared light from the planet at longer wavelength than previous studies. We were able to show for the first time that the planet’s infrared colours cannot be explained by its atmosphere alone.

Instead, the measured infrared excess suggests the presence of a circumplanetary disc, just like the one imagined as the birthplace of Jupiter’s four Galilean moons – Io, Europa, Ganymede and Callisto.

Decades ago, the same argument was used as evidence for the presence of protoplanetary discs, the dusty discs of gas around baby stars that are the birthplaces of planets themselves. 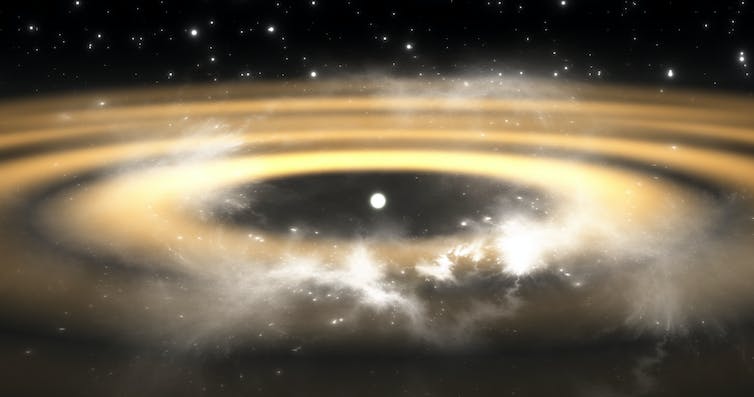 Now we can use the same techniques but on a smaller scale to see the birthplace of moons.

The tricky part is that spotting planets with a telescope is like staring into car headlights and trying to spot a firefly. We first had to model and subtract the bright glare of the star, to spot the feeble glow of the planet.

In our processed image (above) we carefully deleted the starlight (we show the location with an asterisk), revealing both the planet and faint structures in the disc surrounding the star.

The discovery of the 4 largest moons of Jupiter 4 centuries ago gave astronomers a first hint that giant planets must form surrounded by a circumplanetary disc.

Plenty of work has been done since to try to understand their properties, but we finally have direct confirmation that they exist. It’s the culmination of a long search.

Read more: Observing the invisible: the long journey to the first image of a black hole

It’s also exciting. Our work shows that theoretical models of giant planet formation were not too far off. There is now the possibility that moons could be forming right now in the circumplanetary disc around PDS 70 b.

It’s hoped the new algorithm we developed can now be used to attempt to extract faint signals from other complex datasets of planets forming in other star systems.

It blows the mind to think we might see other planets and even moons in the process of formation, using the biggest telescope in the world. It’s just another reminder of how small and insignificant we really are.

Valentin Christiaens is a Research Fellow in Astrophysics at Monash University.

Daniel Price is an Associate Professor in Astrophysics and ARC Future Fellow at Monash University.