Jun 24, 2019 11:58 PM PHT
Agence France-Presse
Facebook Twitter Copy URL
Copied
'With our current measurements, we have no way of telling if the methane source is biology or geology, or even ancient or modern,' says Paul Mahaffy of NASA's Goddard Spaceflight Center 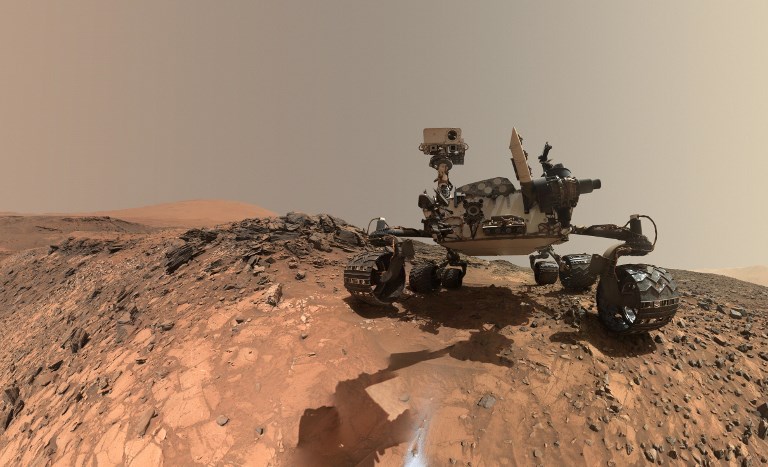 WASHINGTON DC, USA – NASA’s Curiosity Rover has detected the highest ever levels of methane in the course of its mission on Mars, an exciting discovery because the gas could point to the existence of microbial life.

But the methane could also be produced as a result of interactions between rocks and water.

“With our current measurements, we have no way of telling if the methane source is biology or geology, or even ancient or modern,” said Paul Mahaffy of NASA’s Goddard Spaceflight Center in Greenbelt, Maryland.

The Curiosity team has caught whiffs of methane many times over since Curiosity touched down on the Martian surface in 2012.

One leading theory is that the methane is being released from underground reservoirs created by ancient life forms.

Though Mars has no active volcanoes like on Earth, it is possible that methane is being released from geological processes, involving reactions of carbon from carbonate rocks or carbon dioxide, with hydrogen from liquid water.

At the right temperatures these reactions produce methane.

Past papers have documented how background levels of the colorless, odorless gas seem to rise and fall seasonally.

The team have also noted sudden spikes in methane, but cannot say how long these temporary plumes last or why they differ from the seasonal patterns.

Researchers organized a new experiment over the weekend to gather more information about the latest spike, a suspected transient plume, in order to add context to the measurement.

“They also need time to collaborate with other science teams, including those with the European Space Agency’s Trace Gas Orbiter, which has been in its science orbit for a little over a year without detecting any methane.”

Combining readings from the surface and from orbit could help them pinpoint the source of the gas and understand how it interacts with the planet’s atmosphere, which is about a hundred times thinner than Earth’s and 95% carbon dioxide.

“That might explain why the Trace Gas Orbiter’s and Curiosity’s methane observations have been so different.” – Rappler.com