Jun 29, 2019 5:07 PM PHT
Agence France-Presse
Facebook Twitter Copy URL
Copied
'The US pushed some governments, including Saudi Arabia, Brazil and Turkey, to water down the text,' says Yuki Tanabe of the Japan Center for a Sustainable Environment and Society 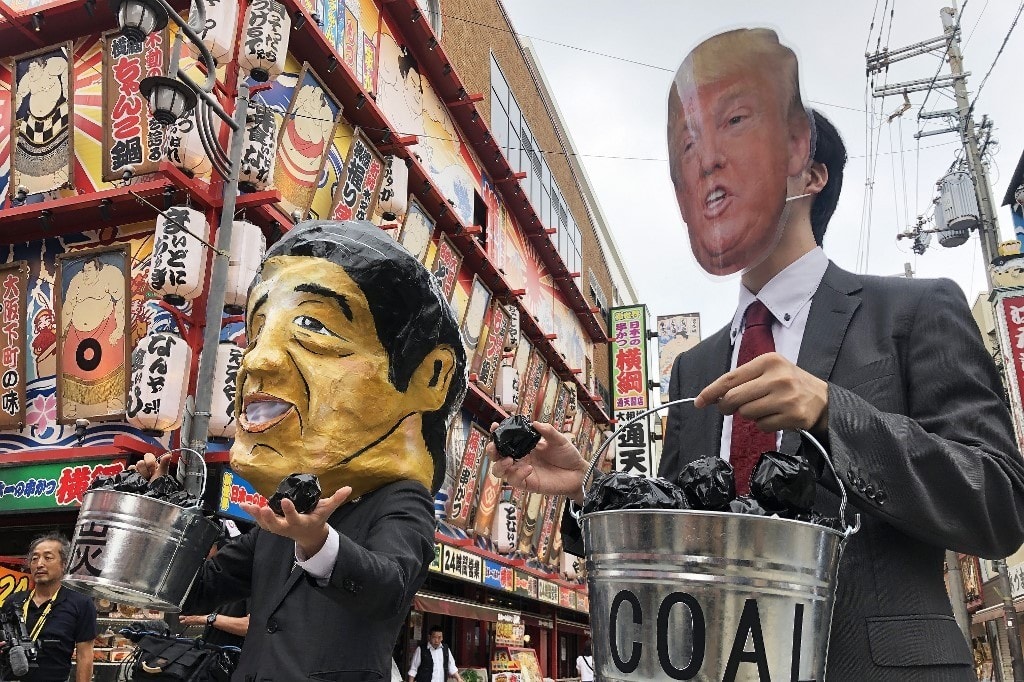 OSAKA, Japan – Four years after the landmark Paris deal, international consensus on strong action to tackle climate change risks is crumbling, with the issue among the biggest sticking points at this week’s G20 summit.

While tensions over trade were expected at the talks in Japan’s Osaka, reaching agreement on language about climate action has proved just as contentious.

Negotiators known as sherpas were stuck working into the small hours of Saturday morning, Jue 29, trying frantically to find wording that both climate sceptics and those looking for strong commitments could agree on.

Part of the issue is the 2015 Paris climate deal itself, which nearly 200 nations have signed up to. The agreement commits signatories to work to reduce emissions, but Washington plans to withdraw from it.

The process of withdrawing will take several years and in the meantime the US has refused to endorse statements backing the deal.

At the last two G20 meetings, in Buenos Aires and Hamburg, a work-around was found: a reference to the Paris deal as “irreversible” was endorsed by 19 members, and Washington added its own line reiterating its plans to quit.

This time around, Japan hoped to find a formulation everyone would agree on but EU countries demanded strong language and Washington tried to recruit allies to its climate-sceptic cause.

“The US pushed some governments, including Saudi Arabia, Brazil and Turkey, to water down the text,” said Yuki Tanabe of the Japan Center for a Sustainable Environment and Society (JACSES).

“I am very concerned about the situation,” he told Agence France Presse.

After marathon negotiations that led to cancelled press conferences and delayed departures, the leaders endorsed a statement that once again used the so-called 19+1 formula, but sources said the language was hard-won.

“Climate was the most difficult,” a French presidency source said, adding that talks ground to a halt overnight because of US objections, with a deal reached only thanks to a united front among other G20 members.

“This shows two things: that it’s an extremely difficult subject and that we can get there but we must show increasing determination and European unity,” the source added.

Experts said that, under the circumstances, the deal could be seen as something of a victory.

“In light of the current situation, especially with the United States, maybe the 19-plus-one formulation… is the best possible scenario that we could agree,” said Yukari Takamura, a professor of international law at the University of Tokyo.

“But of course in light of the increasing concern about climate impact and the risks, it’s not the ideal agreement,” she told AFP.

Takamura said the discord at the G20 was evidence of growing polarisation on the climate issue, with countries including some in Europe coming under pressure from their citizens to take more aggressive action as sceptics like Washington, Saudi Arabia and Brazil waver on their commitments.

But she said the scepticism was balanced out in some ways by the growing pressure from businesses, activists and countries committed to combatting global warming.

Even before the G20 began, France’s President Emmanuel Macron said strong climate change language would be a “red line” for Paris.

And China, one of the world’s top emitters, joined France and the United Nations to issue its own statement, with Chinese Foreign Minister Wang Yi saying countries must “strengthen our action.”

“All countries must remain firm in their confidence and deliver on the commitments in the Paris agreement,” Wang added.

But the divisions are unlikely to disappear soon, and the issue may prove even harder to resolve when international leaders gather next year: the 2020 G7 meeting will be chaired by the United States, and the next G20 summit will be held in oil-producer Saudi Arabia. – Rappler.com