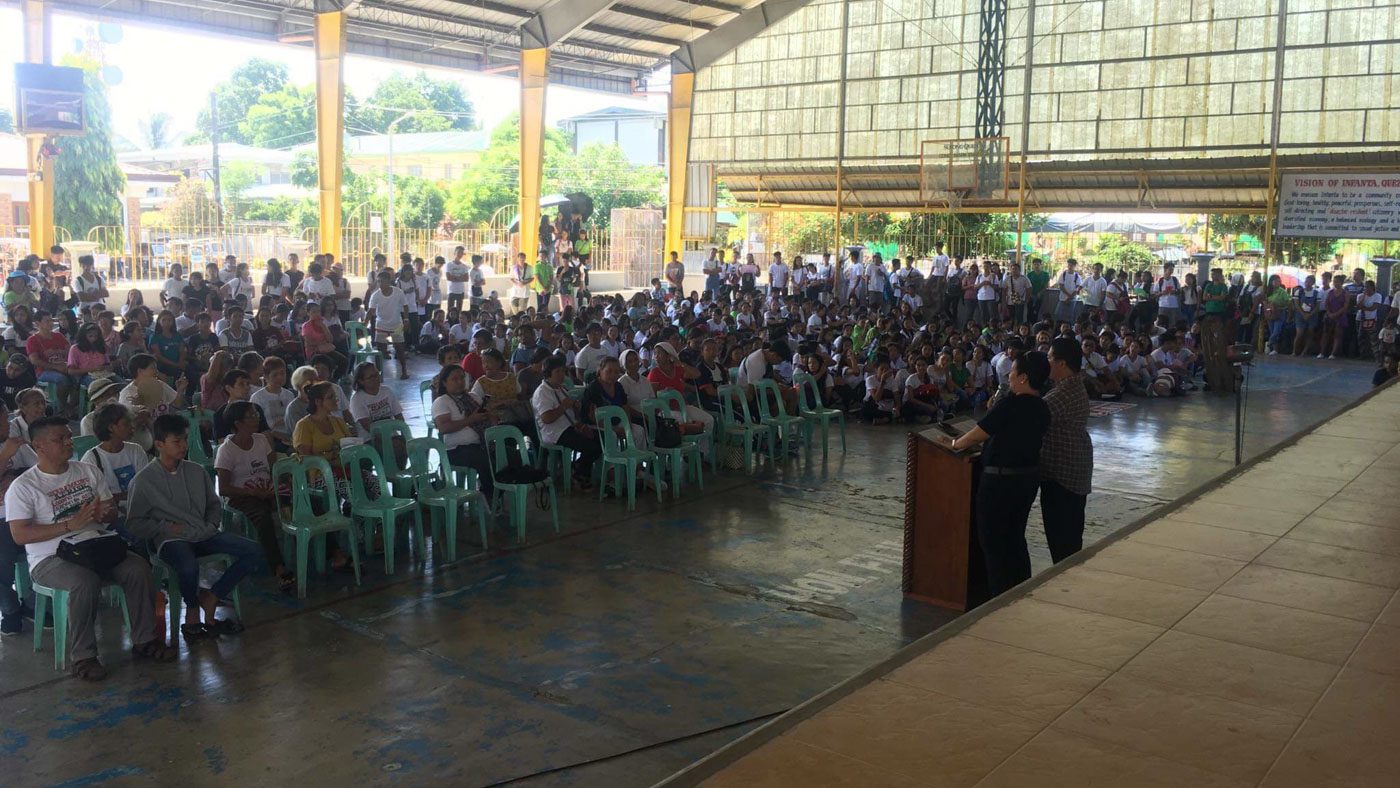 MANILA, Philippines – There is strength in numbers, and that is what the Stop Kaliwa Dam (SKD) Coalition wants to show the government through local and national signature campaigns.

Their aim? To gather 10 million signatures from all over the Philippines for the petition asking President Rodrigo Duterte to stop the Kaliwa Dam project.

The SKD coalition composed of people and sectors opposed to the Kaliwa Dam – including its local counterpart Alyansa ng Mamamayan Laban sa Dam (ALMA!) – has launched the local campaign in Infanta, Quezon. Present during the event were Infanta Mayor Filipina Grace America, priests (including those from General Nakar), local and national organizations supporting the campaign, and IP leaders and their families.

“The 10 [million] signature goal is a way of showing the government that there’s an immense resistance to the Kaliwa Dam,” said Egay Morondoz, one of the coordinators for Pambansang Kilusan ng mga Samahang Magsasaka (PAKISAMA) who was also present during the launch.

Over 3,000 persons signed the petition during the event, with the SKD members continuing the campaign in their respective networks such as schools and dioceses. The online petition, which was launched nationally on June 5, has been signed by more than 8,000 supporters as of this posting.

Father Pete Montallana of Save Sierra Madre Network said people should sign the petition for the President to revoke the project. 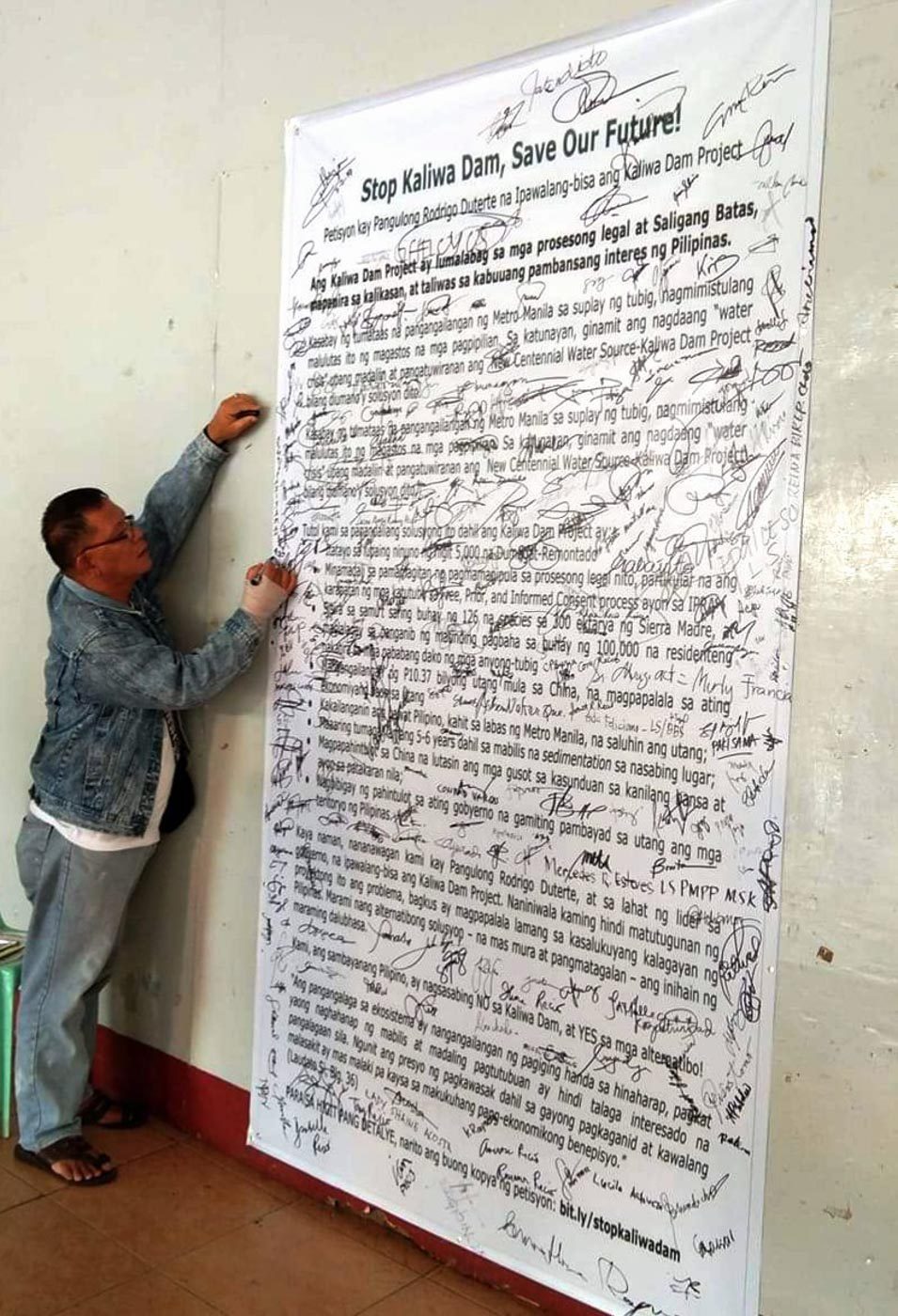 “We have to stop the Kaliwa Dam because it will destroy 300 hectares of forest which is needed to absorb carbon,” the cause of man-made climate change.

This forest is home to Kaliwa Watershed Forest Reserve in General Nakar in Quezon, with native trees and endangered wildlife like the Philippine eagle, Philippine warty pig, and Philippine brown dear. This reserve is also crucial to the climate resiliency of the locals.

Morondoz added that time would come the Agos River would dry up because the trees were gone. Agos River is the main drainage system in the Northern part of REINA (Rizal, Infanta, and General Nakar) and where the dam will be built.

Morever, the river flow will be diverted to a tunnel going to Teresa, Rizal, for water treatment. As a result, Infanta will no longer have a water supply coming from the Kaliwa Agos River. This will affect fishing areas, irrigation, and potable water sources. Brackish water will also be affected and pose threat to biotic and abiotic species.

As the communities in REINA depend on the environment for livelihood, this will increase their vulnerability and affect their capacities to survive disasters.

Worst fear and its antidote

That’s why their greatest fear is a repeat experience of the grave flashflood in 2004. According to a recent study that mapped tropical cyclone risks in the Philippines, its location in Quezon puts it at high risk of typhoons.

“Quezon is on the eastern Philippine coasts, at the border of the world’s busiest typhoon belt and on vastness of warm ocean water in Western Pacific Ocean,” the study said.

The same study showed that the amount of rainfall was also very high for tropical depressions in the Philippines in 2004. It said, “The extreme rainfall recorded from tropical depression [Winnie] on November 29, 2004, is equivalent to 15-day rainfall of November,” resulting to landslides and flashfloods.

According to Asia-Pacific Network for Global Change Research, Infanta was then the hardest hit because it served as a catch basin of the 3 major tributaries flowing directly to the Pacific Ocean.

The environment department’s Mines and Geosciences Bureau confirmed this too: Infanta is vulnerable to climate and weather risks, with upland areas moderately at risk to landslides, and some parts highly at risk.

Infanta locals have legitimate reasons to feel worried, especially with its Type II climate where there is no dry season with prolonged maximum rainfall from November to February; the increasing frequency and intensity of typhoons due to climate change; and the projected flooding effects of the dam.

But they know better now than worry. Their experience with disasters make them aware of and prepare for its impacts – hence, their resistance to the Kaliwa Dam and their continuous call for alternatives. – Rappler.com