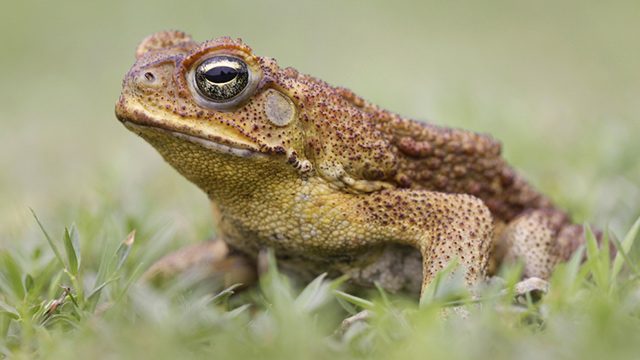 Facebook Twitter Copy URL
Copied
A well-meaning barangay captain in Quezon City, who mistook cane toads for bullfrogs, errs in thinking his action can solve the dengue problem in his area. In fact, he likely creates a new problem.

MANILA, Philippines – A recent news story said a barangay in Quezon City released about 1,000 frogs into an estero as part of its anti-dengue campaign. Despite his good intentions, the barangay captain may have created a bigger problem in his area.

Dengue has killed at least 800 in the country since January, prompting the Department of Health to declare dengue as national epidemic. In Quezon City alone, at least 3,500 were infected by dengue and at least 29 of them have died.

The barangay captain’s move triggered a backlash from netizens, citing that the frogs were invasive and releasing them along esteros might disrupt the environment.

PUBLIC WARNING! the bull frogs they released in Quezon City are actually Cane Toads. They have poison glands & its toxic skin is dangerous to animals particularly to dogs. Please be careful not to let your dogs any where near those toads. It's deadly. https://t.co/vwNt9AUoXh

People are literally disrupting our ecosystem ano? In just one month:

But what does science tell us about these frogs?

Rappler asked Dr. Marites B. Sanguila, a herpetologist at the Biodiversity Informatics and Research Center of Father Saturnino Urios University in Butuan City. Herpetologists are scientists who specialize in the study of reptiles like snakes, lizards and crocodiles, and amphibians like frogs, toads and salamanders. Sanguila and her colleagues are currently studying how some amphibians eat.

One of her studies under the Department of Science and Technology-Philippine Council for Agriculture, Aquatic, and Natural Resources Research and Development (DOST-PCAARRD) is understanding the sources of food of anurans, a type of smooth and moist-skinned frogs.

Sanguila told Rappler that what the barangay released were not bullfrogs but cane toads. “Based on the video, these are not frogs, but are invasive Central American Cane Toads of the species Rhinella marina previously taxonomically known as Bufo marinus,” she said.

These cane toads were brought to the Philippines in the 1930s to control the pests in sugar cane plantations. According to a 2006 Journal of Environmental Science and Management study authored by Dr. Arvin Diesmos, a herpetologist now affiliated with the National Museum of the Philippines, and his colleagues, cane toads are the most widely distributed invasive amphibian species in the country.

“This species has now colonized at least 24 islands across the Philippines with the possible exception of the Palawan island group where an endemic bufonid (Bufo philippinicus Boulenger) occurs,” the study stated.

While B. marinus turned out to be ineffective in curbing the explosive population of crop pests, it was, however, vastly successful in establishing breeding populations.

“They are sometimes mistakenly referred to as ‘bull frogs’ in some parts of the country, but they are dry-skinned, land-loving toads—with the typical warty-skinned appearance of most toads,” she added.

Sanguila explained that amphibians like frogs and toads serve as sources of food, medicine, or raw materials for humans. They also act as environmental health indicators.

However, in the case of the Quezon City barangay, the toads function indirectly as predators eating mosquitos as their prey.

There is one caveat though, cane toads are known to be invasive species thriving across the Philippines. They are “notoriously harmful, pests and invasive species,” said Sanguila.

“As populations of invasive species are introduced to an area, one of the sad outcomes they cause, as they attempt to survive, reproduce, and adapt, is that they compete for food with co-occurring species in the area,” Sanguila added.

Sanguila also said that while these toads eat pests and harmful insects, they do not limit themselves to disease-causing insects.

In the Facebook video showing the release of the toads, the Quezon City barangay captain can be heard saying that “frogs eat mosquito larvae” and will help their fight against dengue.

Studies also show that large cane toads have toxin glands on their skin, which carry and secrete a high load of venom. It is rare that humans get poisoned, unless those who deliberately ingest the toads. However, the toad’s venom could kill animals like dogs and cats (which may lick or eat the toads), as well as snakes and lizards.

Their population could expand and most likely outnumber native frogs in the area. In fact, the toads can even wipe out the other animals which are endemic in the area they are introduced.

“While the initiative is of good intention, it is a risky undertaking, considering the biology of invasive species,” said Sanguila.

She added, that as there are no current studies showing that cane toads are “specialists” that will eat only dengue-carrying mosquitos, releasing them across the barangay will most likely have no significant effect on the number of dengue cases in the area.  – Rappler.com