From the streets to the summit: Young climate leaders mobilize at UN 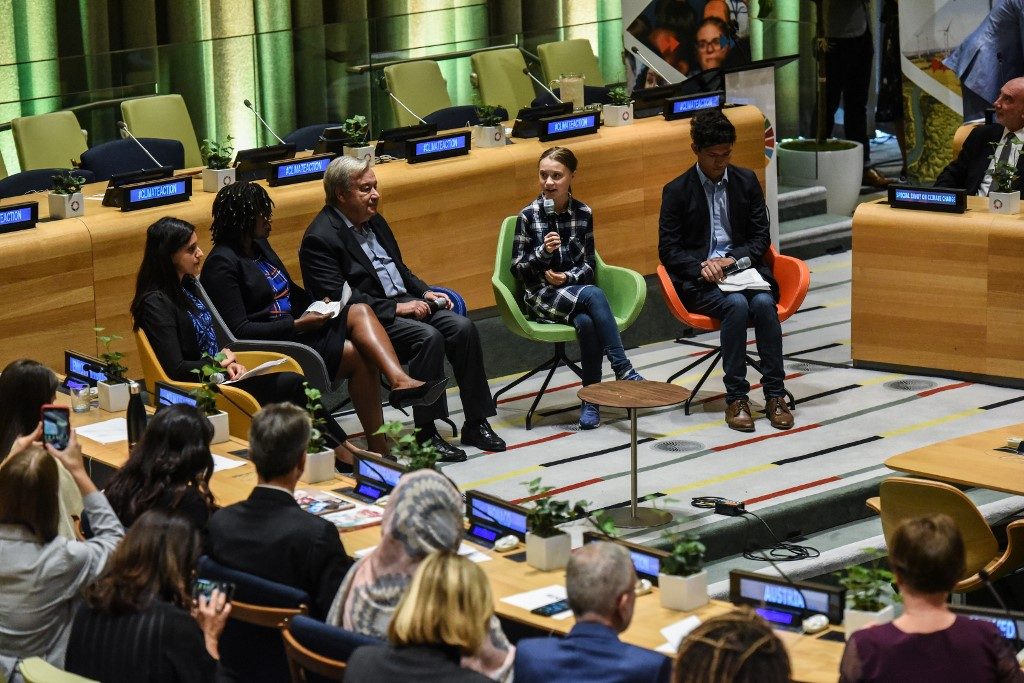 UNITED NATIONS, United States – A day after youth-led global climate strikes, several hundred young activists including Greta Thunberg gathered for a climate summit at the United Nations on Saturday, September 21, hitting out at older generations for doing too little to curb carbon emissions.

The UN has invited 500 young activists and entrepreneurs to take part in the meeting, the first of its kind, though some were unable to attend after being denied US visas, a point raised by the organizers.

It comes days before a climate action summit which UN chief Antonio Guterres has called to seek greater commitments from world leaders on reducing their greenhouse gas emissions in line with the Paris accord to avert runaway global warming.

The tone for Saturday’s event was set by an impassioned speech by young Argentine activist Bruno Rodriguez, 19, who led school strikes in his native country.

“Many times, we hear that our generation is going to be the one in charge of dealing with the problems that current leaders have created, and we will not wait passively to become that future: the time is now for us to be leaders,” added Rodriguez.

Thunberg, whose protests outside Sweden’s parliament last year sparked the global youth movement, spoke first but briefly, saying she wanted to give more time to the others.

“We showed we are united and young people are unstoppable,” said the 16-year-old, who will also address Monday’s summit.

On Friday, September 20, masses of children skipped school to join global strikes that Thunberg said were “only the beginning” of the movement. (READ: ‘Millions’ protest in youth-led global climate strike)

Some 4 million people filled city streets around the world, organizers said, in what was billed as the biggest-ever protest against the threat posed to the planet by rising temperatures.

Youngsters and adults alike chanted slogans and waved placards in demonstrations that started in Asia and the Pacific, spread across Africa, Europe, and Latin America, before culminating in the United States.

Strike organizers 350.org said Friday’s rallies were the start of 5,800 protests across 163 countries over the next week.

The corridors of the UN were filled Saturday with young people in formal suits and ties, dresses, and traditional wear from their home countries, and others wearing simple t-shirts and jeans.

“When you walk around this building, you see a bunch of old, mainly men wearing suits and big ties,” Yusuf Omar, 30, who is a journalist originally from Britain, told AFP. “It’s great to be brought to the table (and) that we are now helping to make decisions.”

“This is the change, and it’s coming,” added Lalita P-Junggee, a green entrepreneur from Mauritius, who turns billboards and textile waste into fashionable bags.

Beyond expressing their discontent, the day involves sessions promoting solutions, with innovators proposing their ideas to judging panels from leading global companies.

There are also workshops on digital activism, including a class on how to make videos that go viral.

A landmark UN report to be unveiled next week will warn global warming and pollution are ravaging Earth’s oceans and icy regions in ways that could unleash misery on a global scale.

But Guterres struck a more optimistic note Saturday, telling the young leaders: “There is a change in momentum.

“This changing momentum was due to your initiative and to the courage, with which you have started these movements.” – Rappler.com