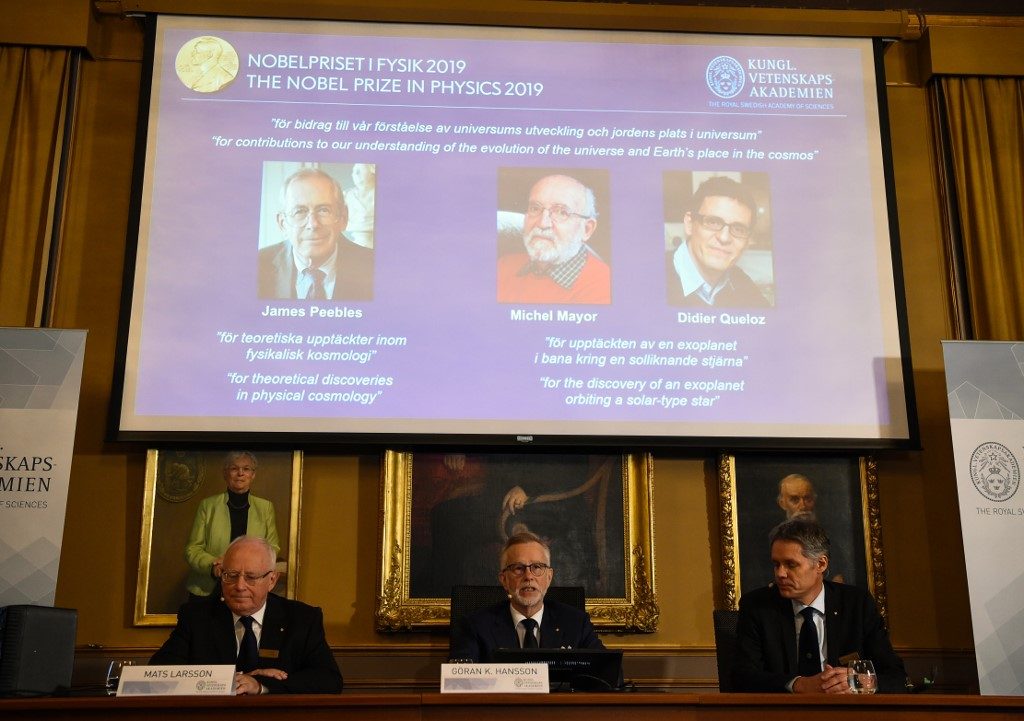 Facebook Twitter Copy URL
Copied
(UPDATED) 'Their discoveries have forever changed our conceptions of the world,' according to the jury

STOCKHOLM, Sweden (UPDATED) – Canadian-American cosmologist James Peebles and Swiss astronomers Michel Mayor and Didier Queloz on Tuesday, October 8, won the Nobel Physics Prize for research that increases the understanding of our place in the Universe.

Peebles won one-half of the prize “for theoretical discoveries that have contributed to our understanding of how the Universe evolved after the Big Bang,” professor Goran Hansson, secretary general of the Royal Swedish Academy of Sciences, told a press conference.

Mayor and Queloz shared the other half for the first discovery, in October 1995, of a planet outside our solar system – an exoplanet – orbiting a solar-type star in the Milky Way.

“Their discoveries have forever changed our conceptions of the world,” the jury said.

Watch the very moment the 2019 Nobel Prize in Physics is announced.

Developed over two decades since the mid-1960s, Peebles’ theoretical framework is “the basis of our contemporary ideas about the Universe.”

Peebles built upon Albert Einstein’s work on the origins of the Universe by looking back to the millenia immediately after the Big Bang, when light rays started to shoot outwards into space.

Using theoretical tools and calculations, he drew a link between the temperature of the radiation emitted after the Big Bang and the amount of matter it created.

His work showed that the matter known to us – such as stars, planets, and ourselves – only make up 5%, while the other 95% are made up of “unknown dark matter and dark energy.”

In a telephone interview at the press conference, Peebles said that what those elements actually are is still an open question.

“Although the theory is very thoroughly tested, we still must admit that the dark matter and dark energy are mysterious,” Peebles said.

He also advised young people contemplating a career in science that, while awards were “charming” and “very much appreciated, they should do it for the love of it.

“You should enter science because you are fascinated by it. That’s what I did.”

Using custom-made instruments at their observatory in southern France in October 1995, Mayor and Queloz were able to detect a gaseous ball similar in size to Jupiter, orbiting a star 50 light years from our own Sun.

Harnessing a phenomenon known as the Doppler effect, which changes the color of light depending on whether an object is approaching or retreating from Earth, the pair proved the planet, known as 51 Pegasus b, was orbiting its star.

“Strange new worlds are still being discovered,” the Nobel jury noted, challenging our preconceived ideas about planetary systems and “forcing scientists to revise their theories of the physical processes behind the origins of planets.”

Mayor was a professor at Geneva University and Queloz was his doctorate student, when they made they discovery which “started a revolution in astronomy,” and since then over 4,000 exoplanets have been found in our home galaxy.

“What we detected 25 years ago was just the tip of the iceberg,” Queloz told Agence France-Presse.

The news of the prize was a shock to Queloz, even though others had speculated their discovery was worthy of the honor.

“When we made the discovery, very early on lots of people told me that will be a Nobel Prize discovery. For 25 years people kept saying this and at some point I just said this isn’t going to win a Nobel Prize after all,” he said.

The trio will receive the prize from King Carl XVI Gustaf at a formal ceremony in Stockholm on December 10, the anniversary of the 1896 death of scientist Alfred Nobel who created the prizes in his last will and testament.

In 2018, the honor went to Arthur Ashkin of the US, Gerard Mourou of France and Donna Strickland of the US for laser inventions used for advanced precision instruments in corrective eye surgery and in industry.

This year’s Nobel prize season kicked off on Monday, October 7, with the Medicine Prize awarded to Americans William Kaelin and Gregg Semenza, and Britain’s Peter Ratcliffe.

They were honored for research into how human cells sense and adapt to changing oxygen levels, which opens up new strategies to fight such diseases as cancer and anemia.

The winners of this year’s Chemistry Prize will be announced on Wednesday, October 9.

The Literature Prize will follow on Thursday, October 10, with two laureates to be crowned after a sexual harassment scandal forced the Swedish Academy to postpone the 2018 award, for the first time in 70 years.

On Friday, October 11, the action moves to Norway where the Peace Prize is awarded, with bookies such as Ladbrokes backing Swedish teen climate activist Greta Thunberg.

The Economics Prize wraps up the Nobel season on Monday, October 14. – Rappler.com