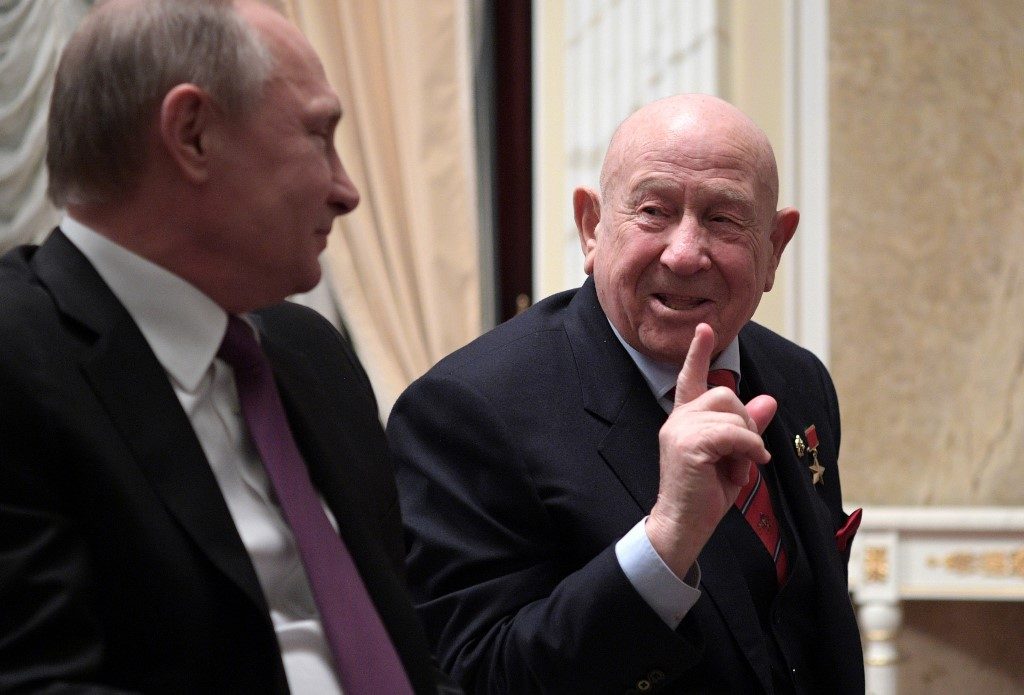 Facebook Twitter Copy URL
Copied
Russian space agency Roscosmos says it is saddened to announce the death of 'cosmonaut No 11' who was twice decorated with the country's top honor, the Hero of the Soviet Union

MOSCOW, Russia – Alexei Leonov, a Soviet-era cosmonaut who was the first man to conduct a spacewalk in 1965, died in Moscow on Friday, October 11, aged 85 after a long illness.

Russian space agency Roscosmos said it was saddened to announce the death of “cosmonaut No 11” who was twice decorated with the country’s top honor, the Hero of the Soviet Union.

Leonov was a close friend of Yury Gagarin, the first human to go to outer space in 1961.

Leonov trained together with Gagarin and was selected to perform the first spacewalk as the Soviet Union and United States, Cold War foes on Earth, were locked in a frantic race to conquer space.

In 1965, Leonov made history when he left a spacecraft during the Voskhod 2 mission for a spacewalk that lasted 12 minutes and 9 seconds.

“I gently pulled myself out and kicked off from the vessel,” Leonov, then a sprightly 80-year-old, told Agence France-Presse (AFP) in 2015.

“(There was) an inky black, stars everywhere and the sun so bright I could barely stand it,” he added.

Tethered to the craft with a five-meter (16-foot) long cord, he gazed in wonder at Earth’s geography laid out sweepingly below him, his motherland perfectly visible.

“I filmed the Earth, perfectly round, the Caucasus, Crimea, the Volga. It was beautiful,” he said.

Back on the surface, millions followed the mission as it was beamed live on radio and television.

The mission was successful on the whole but the men’s return to Earth nearly ended in tragedy when Leonov and Belyayev crash-landed deep in the Russian woods.

They completed man’s first spacewalk 10 weeks before the United States.

The spacewalk and the crash-landing were featured in a 2017 film, the Spacewalker. Leonov, who was played by Russian movie star Yevgeny Mironov, was a consultant on the project.

A decade later in 1975 Leonov commanded the Soyuz 19 in the first joint space mission between the Soviet Union and the United States.

Leonov, who became a legend in Russia, celebrated his 85th birthday in May.

Putin congratulated the Soviet-era cosmonaut at the time, calling him “a worthy representative of the legendary team of Soviet cosmonauts.”

“You have made a great contribution to Russian cosmonautics and have promoted its outstanding achievements,” Putin has said.

“It’s a huge tragedy for us all,” said the wife of cosmonaut Boris Volynov, Tamara Volynova, who wrote a book about cosmonauts.

“Alexei is a unique person,” she told AFP.

He will be laid to rest at a memorial cemetery just outside Moscow on Tuesday, October 15, officials said. – Rappler.com