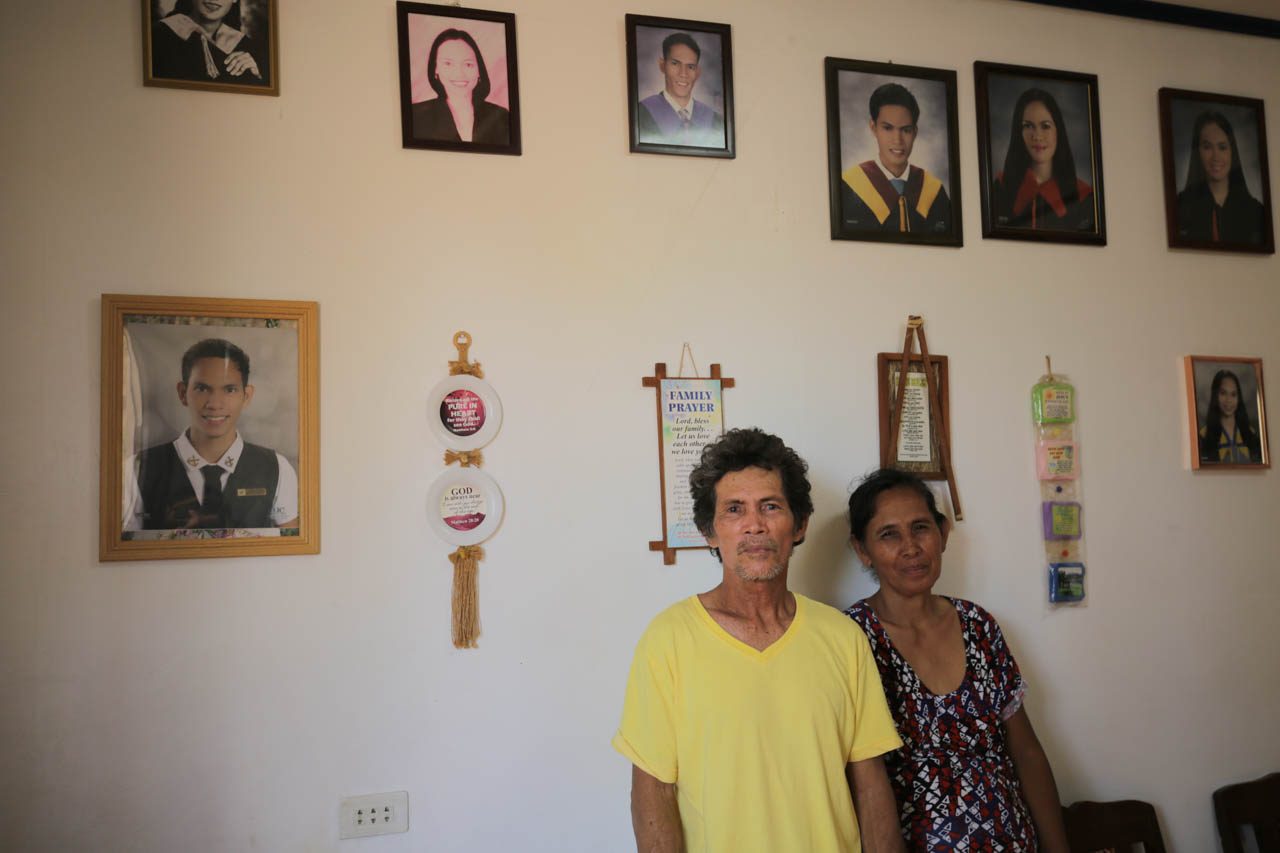 Facebook Twitter Copy URL
Copied
It is now 31 years since the Lobos began their seaweed farm. Now that their years of hardship are behind them, the family can look back with gratitude and relief.

CEBU, Philippines – Framed photographs of their 12 children fill two walls in the living room of Mirasol and Cerilo Lobo, who now make a living by raising seaweed in Lipayran, an island on the northern tip of Cebu province.

An accident that nearly maimed one of their sons convinced the couple that they were right about doing whatever it took to send their children to school. But when that same son chose to become a police officer, Cerilo decided it was time he stopped using dynamite to fish. His son Arnel, recently promoted, warned that he would have had no choice but to arrest Cerilo for violating the law if his father insisted on using illegal methods.

“We always felt under pressure to make more money because we have such a large family,” Mirasol said. Her father persuaded the couple in 1988 to take up seaweed farming, and warned Cerilo that it was only a matter of time until he lost a limb, if not his life, if he continued to fish illegally.

“You have one foot in prison and the other foot in the cemetery,” his father-in-law told Cerilo, who had learned to use dynamite from his father.

After surviving two accidental explosions, both of which wrecked the pumpboat he was in, Cerilo had grown weary of illegal fishing. The chance to make better money from a block of Eucheuma cottoni – which he and Mirasol started with P15,000 – and her father’s advice, gave him a new way forward.

Years of want and hardship

It is a point of pride for the Lobos that all but one of their children stayed in school. Only the 3 youngest were still in school as of May 2019, when a team from the conservation group Oceana visited them. Only their eldest son, Romir, had decided to skip formal education so he could help his parents fish and tend to their seaweed farm.

Those who have graduated and landed good jobs since then – an English teacher in South Korea, a computer programmer in Dubai, a regional mall manager in Cebu City, and the police officer who convinced Cerilo to give up illegal fishing – made sure their siblings would have all the support they needed.

Their daughter Rosemarie had been planning to send money to fix the family’s house when Super Typhoon Yolanda (Haiyan) struck in November 2013. She immediately sent home P35,000 so the family could buy canned food, rice, and instant noodles to share with their neighbors in Sitio Butay. The next time she sent help, her policeman-brother Arnel escorted the shipment, which included more than 20 sacks of rice, and the Lobo family walked to the other neighboring villages on their island to give it all away.

Their children’s resources made a quick recovery possible, and now the Lobos’ new home is sturdier than before. “Who would have thought we would manage to send our children to school?” Mirasol said. “Everything we have now are answered prayers. Nothing is impossible with God.”

Two years ago, more than halfway through their fifth decade in life, Mirasol and Cerilo flew on a plane for the first time to attend their son Cerilo Jr’s wedding in Camarines Sur. When the plane landed, they looked at each other and marveled at how far they’d come. Just a few years before that happy day, they couldn’t even afford to go to Cebu City for daughter Rosemarie’s graduation. That memory still makes Mirasol cry.

Now that their years of hardship are behind them, the Lobos can look back with gratitude and relief. One whiff, and they’re reminded of how fortunate they were that Mirasol’s father persisted in getting Cerilo to change his livelihood. The path to their home in Lipayran is lined with rows of drying seaweed, which have turned purple and smell saltier than the sea itself.

Dreams tied to the currents

Cerilo remembered how, as a younger man, he would make it home around 8 at night after an afternoon spent fishing. After a meal and a brief nap, he would head out again at 2 am to fish some more. Cerilo can’t help but justify that he used dynamite to fish because he had so many to feed. Milagros raised goats, which contributed to the household’s income. They planted vegetables.

After he gave up illegal methods, Cerilo would often hear about illegal fishers who made P20,000 – sometimes even P50,000 – in just one trip. There was no way he’d make as much as an honest fisherman, but he and Mirasol persisted. There were times they lived on root crops. Once, one of their sons joked, “Kaon pinggan, inom baso (Eat the plate, drink the glass).” That memory, too, still makes Mirasol cry.

To their credit, the Lobos’ children endured their hardship with grace. When her allowance was late, Rosemarie, who went to high school in Negros, gnawed sugarcane at mealtimes. “They worked hard in school,” Milagros said. Every diploma on the wall tells two stories of endurance and hard work: that of the parents, and that of the child.

It is now 31 years since the Lobos began their seaweed farm. In all these years, the country has become one of the main producers of farmed seaweed, although it produces a fraction of what seaweed farmers can harvest in China and Indonesia, which together account for some 80% of the world’s supply.

Nearly 3,000 seaweed farms in Central Visayas contribute less than 10 % of the Philippines’ total yield. What the numbers leave out is how each family’s fortunes have changed because they were taught to profit from the bioeconomy in a sustainable way.

Approaching Lipayran, where the Lobos live with some 3,500 other people, one sees long rows of polystyrene blocks bobbing on the surface. They’re markers for the seaweed growing underneath. The big picture tells a story about loosening poverty’s grip and adapting to climate change: here’s a way to meet the world’s need for protein without having to exploit more land or freshwater.

For a look at the smaller, more intimate picture, the Lobos are a good case. When they started, they profited P5,000 after 1.5 months. They kept at it.

Eventually, they joined a fisherfolks’ organization that gave them access to straw, rope, polystyrene, and other materials. Working together gave the association a chance to command better prices, as well as join other organizations and Oceana in the campaign to protect Tañon Strait and coastal resources.

The Lobos began to do so well that some of their neighbors soon followed suit.

Both Cerilo and Mirasol began life as fishermen’s children. He was 9, barely big enough to row, when he began tagging along to help his father fish. On too many mornings, he skipped school because making a living was more important. Neither he nor Mirasol made it past grade school.

But Mirasol’s father had never used illegal methods to fish, and he was a big reason Cerilo eventually gave up the practice as well. It took him 3 years since he and Mirasol started their seaweed farm to give up illegal fishing entirely. “Bahala na mo, ako dili na ko (You’re on your own. I’ve had enough of this),” he told other fishers who still used dynamite and cyanide.

To keep their livelihood steady these days, the Lobos have to make sure their 300 lines of seaweed are strong enough to survive the currents. They depend for help on their eldest son, Romir, the one who chose to keep fishing so his siblings could go to school instead. All 8 of Cerilo’s siblings are now seaweed farmers, too.

Now the Lobos dream of building a small dock on the rocky shore where their boats are lashed between trips to the mainland. But that will have to wait until their last child finishes school. – Rappler.com

Isolde D. Amante is a writer who lives in Cebu. She thanks Oceana Philippines for the opportunity of meeting some truly inspiring fishers and community leaders in the Visayas.