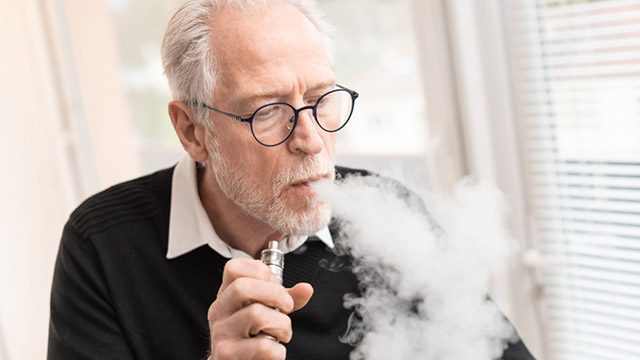 Facebook Twitter Copy URL
Copied
'This is the first known case of a metal-induced toxicity in the lung that has followed from vaping and it has resulted in long-term, probably permanent, scarring of the patient's lungs,' says a researcher

PARIS, France – Doctors treating a patient with a rare lung disease usually caused by exposure to industrial metals say it may instead be the first case linked to vaping.

Electronic cigarettes are sold as safer alternatives to traditional tobacco products and as aids to stop smoking. But they have been implicated in a growing number of recent deaths and health alerts, especially in the United States.

Researchers at the University of California San Francisco said the patient had hard-metal pneumoconiosis, typically found in people exposed to metals such as cobalt or tungsten used in tool sharpening or diamond polishing.

It causes a persistent cough and breathing difficulties, and leaves tell-tale scarring on lung tissue. (READ: DOH is ‘1000%’ in support of vaping ban)

Kirk Jones, Clinical Professor of Pathology at UCSF, said “this patient did not have any known exposure to hard metal, so we identified the use of an e-cigarette as a possible cause.”

The case study, published in the European Respiratory Journal, said that when researchers tested the patient’s e-cigarette, which was used with cannabis, they found cobalt in the vapor it released, as well as other toxic metals – nickel, aluminium, manganese, lead and chromium. (READ: New York sues e-cigarette firm Juul for targeting youngsters)

This was similar to other studies, suggesting that the metals were coming from the heating coils found in vaping devices, rather than from any particular type of re-fill – as has been previously thought.

“Exposure to cobalt dust is extremely rare outside of a few specific industries,” Rupal Shah, assistant professor of medicine at UCSF, was quoted as saying.

“This is the first known case of a metal-induced toxicity in the lung that has followed from vaping and it has resulted in long-term, probably permanent, scarring of the patient’s lungs,” he said.

An accompanying European Respiratory Society editorial on stopping smoking rejected the use of e-cigarettes as an aid, saying it was “based on well-meaning but incorrect or undocumented claims or assumptions.”

Editorial co-author Jorgen Vestbo, Professor of Respiratory Medicine at the University of Manchester, said “E-cigarettes are harmful, they cause nicotine addiction and can never substitute for evidence-based smoking cessation tools.”

Commentators on the findings voiced reservations about making the link based on just one case.

Professor John Britton, head of the UK Centre for Tobacco & Alcohol Studies and a consultant in respiratory medicine at the University of Nottingham, said that while cobalt could cause the disease “it is hard to see how they reached this conclusion given that no cobalt particles were detected in the lung samples from the patient.”

“This case is thus yet another example of serious lung disease in someone using an electronic cigarette to vape cannabis,” he said, adding that the risk in cases of people vaping nicotine “as an alternative to smoking tobacco is very low.”

Earlier this year, the World Health Organization warned that electronic smoking devices were “undoubtedly harmful and should therefore be subject to regulation.”

In June, San Francisco became the first major US city to effectively ban their sale and manufacture. – Rappler.com