Dec 26, 2019 8:00 PM PHT
Shaira Panela
Facebook Twitter Copy URL
Copied
Here's a rundown of some of the most exciting and memorable scientific stories in the Philippines in 2019 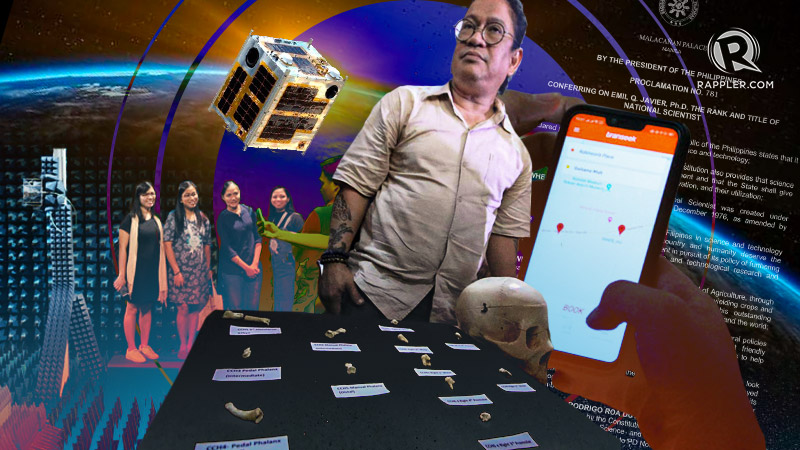 MANILA, Philippines – 2019 was a good year for science in the Philippines.

The country fared relatively well in the 2019 Global Innovation Index, climbing up 19 places from 73rd in 2018 to 54th this year. Sharing the headlines this year were groundbreaking discoveries, from a new human species to the largest known volcano worldwide. A series of laws were passed in support of the scientific community; and a couple of initiatives happened, proving that the country is embarking on a seemingly unchartered territory: space science and technology.

Here’s a rundown of some of the most exciting and memorable scientific stories in the Philippines in 2019.

When Filipino archaeologist Armand Mijares unearthed ancient human bones in Callao Cave in Cagayan, they didn’t know how huge the impact of the findings in the Philippines would be until they confirmed that the bones belong to a previously unknown species of human called Homo luzonensis. The discovery not only cemented the Philippines’ place on the map of archaeological expeditions, it also changed world history – textbooks have to be rewritten to include this new species in teaching the history of human evolution.

Meanwhile, off the coast of Aurora is a 13-million-hectare underwater plateau called Benham Rise, part of the Philippines’ continental shelf. Within Benham Rise, a group of scientists led by a Filipino marine geophysicist Jenny Baretto discovered the largest caldera in the world. A caldera is a crater-like formation after a volcano erupted. Aptly named Apolaki Caldera – after the Filipino mythology god of sun and war – it has a diameter of about 150 kilometers, according to the Facebook post by the University of the Philippines Marine Science Institute (UP MSI) Geological Oceanography Laboratory.

A team of app developers from Caraga State University-Butuan led by Angelito Cagulada Jr and instructor Ernest Jay Cubillas has created Transeek, a Grab-like tricycle hailing app for Butuan commuters. Now in its beta stage, users are raving about the effectiveness of the app in making their commute safer and more efficient.

Up north in Metro Manila, the country’s first hybrid train made its inaugural run on May 6. The five-coach train uses hybrid diesel-powered generator and batteries, like what hybrid electric cars use. It is about 12 meters in length, and has a maximum capacity of 880 passengers. This locally-made hybrid-electric train seeks to augment the number of trains used by the Philippine National Railways.

President Rodrigo Duterte signed into law a number of legislations that are deemed beneficial for the scientific community. Among them are Republic Act No. 11312 or the Magna Carta for Scientists. Under this law, workers in the science and technology sector are expected to receive more benefits.

Another law that was passed this year is the Philippine Innovation Act or Republic Act No. 11293. This law establishes the National Innovation Council which will set the national innovation agenda and strategy. The law backs the promotion of technology to enhance the competitiveness of micro-, small- and medium-scale enterprises.

The President also signed into law Republic Act No. 11337 or the Innovative Startup Act which seeks to “strengthen, promote and develop” the Philippine startup ecosystem.

Pushing for space science and technology

At the same time, the University of the Philippines and the Department of Science and Technology-Advanced Science and Technology Institute launched a space lab named ULyS3ES, a hub for space technology research and development. This initiative follows the series of satellite launches the Philippines has done over the past few years, with Diwata-1, Diwata-2, and Maya-1 successfully flying into orbit. The Philippines also established its largest Ground Receiving Station for satellite data and information in Davao City this year.

A year of gain and loss for the scientific community

This year, agronomist and former UP President Emil Javier was conferred the title and rank of National Scientist, joining 41 others, 11 of whom are still living.

“[Javier] led and promoted sound agricultural policies and programs, massive utilization of climate-resilient and environment-friendly agricultural innovations, and improved governance and management systems to help improve the livelihood of Filipino farmers and fisherfolk,” according to the Proclamation.

Meanwhile, National Scientist Edgardo Gomez, a known conservationist and marine scientist, passed away this year. He pioneered research on the state of coral reefs on a national scale. He was also known for establishing the UP MSI. – Rappler.com