We need to save the tamaraw before it is too late Facebook Twitter Copy URL
Copied
Like many of the country's protected areas, the Iglit-Baco Natural Park exists in a fragile balance. To keep its people, animals, and ecosystems healthy, we all need to pitch in.

“It was sickness that drove us down from the mountains. Measles we got from Tagalog visitors. Half our village of 200 died. The survivors moved here to be closer to civilization. Now we constantly need medicine.”

I’ve known Punong Tribo Fausto, chief of a Mindoro tribe called the Taw’buid, for years, but I never asked why his people set up Tamisan Uno and Dos, two tribal communities, by the foothills of the Iglit-Baco Natural Park in Mindoro. In their tongue, Taw’buid means “people from above,” because they historically inhabited the island’s mountainous interior. Thanking him for his time, we left the community with provisions – coffee, sugar, salt, and a small bag of medicine. When imagining threats to biodiversity, wildfires, logging, poaching and other visual activities are top-of-mind. But sometimes, the smallest beings do the most damage.

Disease is a major killer of isolated tribes. In July of 1837, an American steamboat called the Saint Peter infected the Mandan, a North American tribe of about 2,000, with smallpox. Three months later, only 23 were left alive.

“Isolated communities are especially vulnerable to diseases from the outside world because immune responses have yet to be developed,” said medical anthropologist Gideon Lasco. “Limited access to health care and fear of hospitals also keeps them from seeking treatment.”

The Taw’buid are just one of many groups that the Tamaraw Conservation Program (TCP) works with in their 40-year-old bid to save the tamaraw (Bubalus mindorensis), a well-known but critically endangered buffalo found only in the Philippines. Like native tribes, the tamaraw is highly vulnerable to disease.

Once, tamaraw grazed by the thousands. An estimated 10,000 inhabited Mindoro at the turn of the century.

As now, Mindoro then had prime pastureland – so good that ranchers imported thousands of cattle to the island. As grazing competition for the lowlands increased, ranchers started herding their cattle up mountains – the same ones occupied by tamaraw.

In the 1930s, an outbreak of rinderpest took place. A deadly virus which kills 90% of what it infects, rinderpest laid waste to not just the population of farmed cattle, but the wild tamaraw as well.

By 1969, numbers were estimated to have dropped under 100, prompting the International Union for the Conservation of Nature to declare the species as critically endangered – just one step above extinction.

Decades of conservation led by the TCP, the Biodiversity Management Bureau, Mounts Iglit-Baco Natural Park (MIBNP) and a host of allies including the Biodiversity Finance Initiative (BIOFIN) of the United Nations Development Programme and the Department of Environment and Natural Resources, Mindoro Biodiversity Conservation Foundation Incorporated, D’Aboville Foundation, Global Wildlife Conservation, World Wide Fund for Nature, Far Eastern University, and Eco Explorations have helped tamaraw numbers recover to around 600, confined to 4 isolated areas in Mindoro. All are vulnerable to disease.

“Bovine tuberculosis, hemosep, and anthrax can enter Mindoro if we’re not careful,” explained Mikko Angelo Reyes, a Mindoro-based veterinarian. “The key is biosecurity, the prevention of disease through quarantine, inoculation, and immunization. We should ensure that at the very least, animals entering the island are checked for sickness. We should also establish and respect buffer zones around protected areas, which are often rung by farms and livestock.”

The MIBNP, a former game refuge turned into a protected area, spans 106,655 hectares. It is home to the Philippine brown deer (Rusa marianna), Oliver’s warty pig (Sus oliveri), plus many other rare and endangered species. It also hosts 480 of the world’s 600 remaining tamaraws.

It is currently surrounded by 3,000 cattle belonging to 30 ranchers. In case a disease does break out, one of the original conservation strategies was to keep a separate breeding population in a safe zone, which is where the Tamaraw Gene Pool Program comes in.

In 1982, the government tried to breed tamaraw, enlisting a team of local and international experts to capture 19 of the feisty buffalo. Caught in ingenious pit traps, some were airlifted from the adjacent Aruyan-Malati critical habitat to a captive-breeding facility in Rizal, right inside the Iglit-Baco Natural Park. Despite best efforts, it failed to deliver and only one tamaraw, Kalibasib, survived beyond infancy.

Done differently however, the plan might work, said TCP senior ranger and field operations officer Ed Bata. “The animals we caught were too old to adapt to captivity. We also caught them from Aruyan-Malati instead of the Iglit-Baco Park, where the biggest animals thrive. If we start with younger stock and give the animals a larger area to occupy, they might just breed.” The Gene Pool currently houses only Kalibasib and various animals recovered from wildlife traders.

Ed is part of a team of 28 tamaraw rangers operating in the 4 remaining areas where tamaraws live. Around 15 are permanently stationed in the Iglit-Baco Park, where they work with MIBNP’s separate team of park rangers. These two ranger groups stand at the forefront of conservation.

Together, TCP and MIBNP rangers work to ward off poachers, dismantle spring-loaded balatik and deadly silo snare traps while discouraging the park’s indigenous Taw’buid and Buhid tribesfolk from engaging in slash-and-burn farming.

“It’s no easy task since the tribes must feed their growing families,” said TCP head Neil Anthony Del Mundo. “As their numbers swell, so do their requirements for space and food, which is why they’re setting up more traps, even inside core zones. This is a challenge faced by all protected areas inhabited by people.” 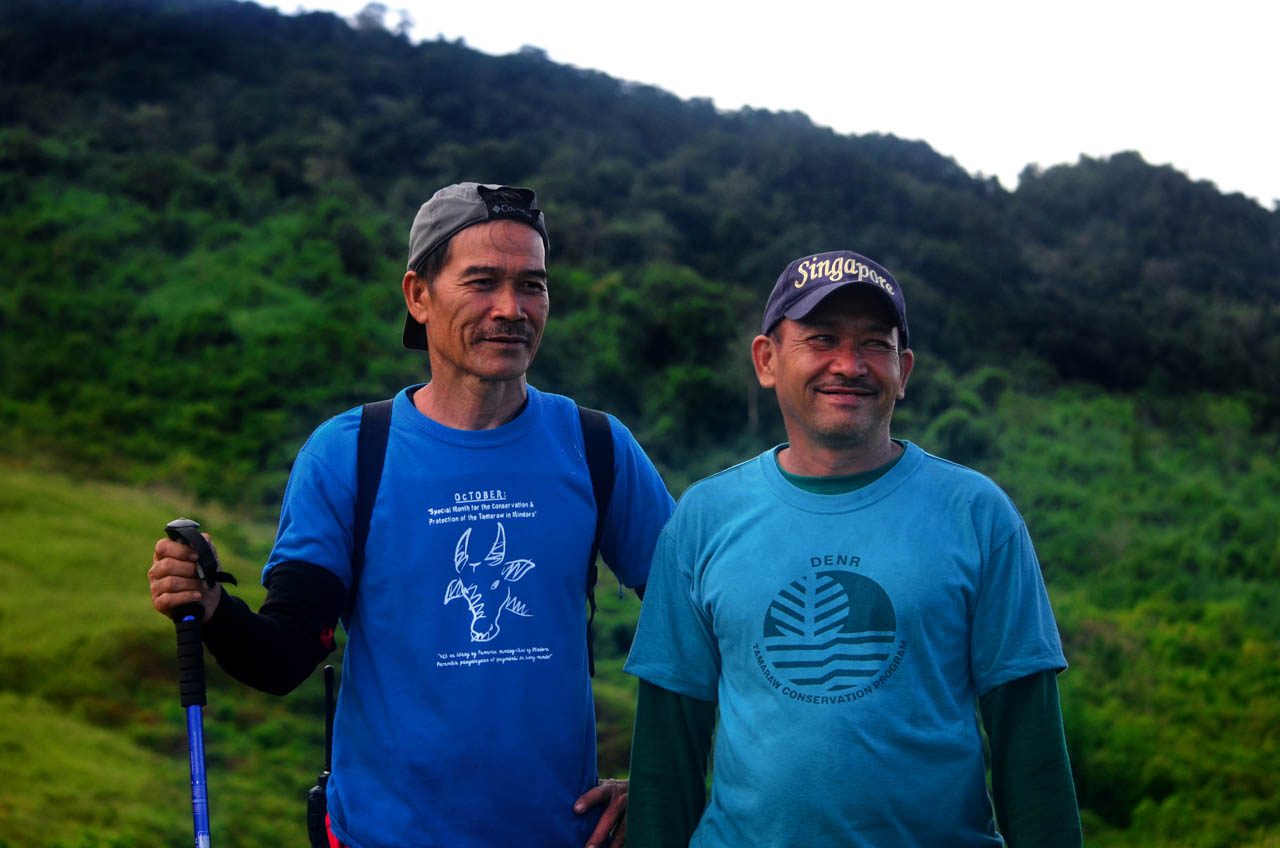 The life of a tamaraw ranger is fraught with difficulty – the risk is high, the pay low. (READ: Lack of tenure, proper gear take toll on Mindoro’s tamaraw rangers)

TCP was created to bolster tamaraw conservation efforts in 1979 through Executive Order No. 544. However, it was set up as a special project instead of an office, so only its head is a regular employee with benefits.

In 2018, TCP was allotted P4.2 million for operations. This 2019, the budget was slashed to P3.3 million, 75% of which goes to personnel salaries, leaving little for operational and field expenses.

Despite the fact that most rangers have put in an average of 10 years’ service and stay in the field a month at a time, none of them get benefits despite years of dangerous fieldwork.

“TCP must be institutionalized as an office to secure better pay, permanent tenure, and government benefits for its hardworking rangers. Our tamaraw rangers go out against hunters armed with military-grade rifles. Communist rebels pass through the same places they patrol. Poisonous snakes, charging tamaraw, animal traps, dangerously-swollen rivers…every time our boys go out on patrol, one foot’s already in the grave,” added June Pineda, former TCP head and now the city environment and natural resources officer of San Jose, Occidental Mindoro.

“A little help goes a long way. We ask fellow Pinoys to donate just a bit to save the tamaraw and the rangers keeping them alive and kicking,” said BIOFIN Philippines project manager Anabelle Plantilla. “Through their efforts and sacrifice, they have managed to grow tamaraw numbers from 100 to about 600.”

Since its inception in 2012, BIOFIN has worked with both the public and private sectors to enhance protection for the country’s biodiversity hotspots by helping secure funds to implement sound biodiversity programs.

BIOFIN helped organize the BIOCAMP, creating a network of allies for tamaraw conservation, while supporting the production of a documentary called Suwag o Suko, launched in October 2019.

BIOFIN’s second phase in the Philippines runs from 2018 to 2022 and includes the implementation of finance solutions to raise resources for the tamaraw and other endangered species through creative crowdfunding from corporations, government units, schools, and individuals. Back in the Iglit-Baco Park, a small man in a loincloth emerged from a field of upland corn.

“Help us. We need medicine,” coughed Ben Mitra, a Taw’buid fufu-ama or elder who years ago taught me to hunt lizards with a gadun, a tribal shortbow. He’s aged visibly, hair speckled gray. Our column, already returning to the lowlands, stopped to dig out whatever medicine we have left.

“Fadi-fadi,” he said in Taw’buid, accepting our goods. Thank you.

As we trekked back down, we prayed they’d be spared from disease and the fate of Old Fausto’s now-abandoned forest village. Like many of the country’s protected areas, the Iglit-Baco Natural Park exists in a fragile balance. To keep its people, animals, and ecosystems healthy, we all need to pitch in. Donate via the details below and click here to know more.