The love formula that says 5:1 = forever 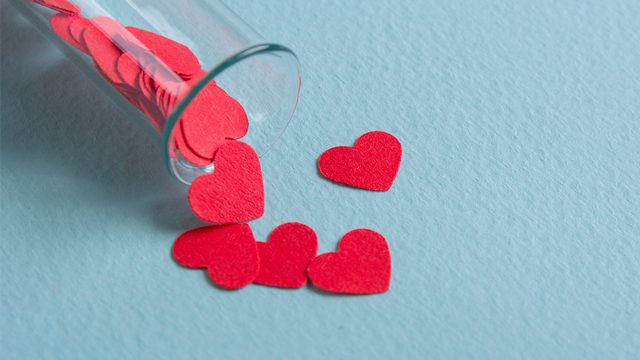 Facebook Twitter Copy URL
Copied
What if there was a formula to predict with about 90% accuracy whether your relationship will continue or break up?

Deep at the core of Valentine traffic is a tighter jam – the chaos of emotions surrounding love relationships. What could help us make sense out of these feelings we are captured by? Is there a Waze version for love to get us to where we want to be without exploding into road rage or getting into alleys that make us lose sight of where we want to go with our significant other? (READ: 4 money mistakes couples shouldn’t make on Valentine’s Day)

“Making sense” is what science is particularly and singularly good at compared to other approaches, but generally, we are still iffy to mention “science” in the same sentence as “love.” To many, they do not belong together either because they think “sense” and “love” are opposites or they are total strangers to each other. Too many wild cards in love, we say. No lab can hold couples through their multi-splendored journeys, you say. (READ: These stories will make you believe that love is real)

It also does not help that many scientists define love the way they would describe any molecular structure. In Bill Bryson’s book The Mother Tongue: English and How it Got that Way, he cited a 1977 conference in the US that defined “love” as “the cognitive-affective state characterized by intrusive and obsessive fantasizing concerning reciprocity of amorant feelings by the object of the amorance.”  The conference made it sound like “love” was a very unpleasant disease caused by some germ called “amorant” that could make anyone feel relieved to just stay single.

But chaos also reigns in the uncertainties in your own health and finances. Yet, you most likely feel very differently about how science and math help in those aspects of your life. This is because we know and accept that medical science has given us reliable measures of health against which we check our own, and finance advisors also say there are measurable things to watch out for to ensure that you do not jeopardize your financial security. So what if you can index the highs and lows of your love relationship like the stock market?

I can hear voices from readers now saying, “What does that even mean?” It means plotting the rise and fall of your behavior and your physiology when you are with your significant other on various situations – including conflict. (READ: When love is truly blind)

Then probably the next question will most likely be, “Why would you do that?” Well, if you can actually see how you behave and how your body reacts along a spectrum from negative to positive, then you will most likely see what your relationship consists of in those terms. And even more importantly, if you base it on the studies of Dr. John Gottman, you will be able to predict with about 90% accuracy whether your relationship will continue or break up.

Dr. John Gottman has been doing love research for over many decades now, with most of those years in partnership with his wife, Dr. Julie Gottman. Their work is held up by data from 40,000 couples who are not just heterosexual couples, but all other partnerships, and is populated by couples across age groups to their 90’s. He gave a very interesting TED Talk that you and your partner would probably like to watch Valentine’s or any other day to affirm what people who have been through journeys of love know as truth – that love is a workpiece that has dials that you can turn that can make or break your journey. From data across tens of thousands of couples across decades, Gottman thinks they have found the “formula.”

But wait, before you think that “formula” means it is foolproof, remember that in any science involving human beings, it is never a 100% if-and-then. This is not about the trajectory of a ball that Newton’s equation can predict with precision that you can bet your last remaining money on. In any science that predicts human behavior, the science would always have to satisfy statistical requirements so that it is above that level where it could have happened by sheer chance or coincidence.

Gottman’s formula gives you a recipe that can guide you to steer your behavior so that your relationships will have a much better chance (over 90%!) of success. On the flipside, as a natural “byproduct,” it also gives you a “poison” recipe – where you can see what kinds of behaviors can break your love into pieces.

The formula is 5:1, and they key is NOT balance. In the spectrum of emotions that can go from positive (joy, interest, amusement, gratitude) to negative (anger, fear, disappointment, disgust), your positive emotions should overwhelm your negative ones by about 5 times more. I guess that is how much of an antidote is required to not just neutralize the “poison” of negative emotions, but more so to transform it so that the “magic,” as Gottman says, stays.

And what are the ingredients of this antidote? From his scientific work, he says they are trust, calm, and commitment. And that is where the “work” comes to be. These ingredients are not manufactured by your instincts. They all crafted with a big part of them coming from your own thinking and resolve.

With “trust,” Gottman described it as not simply a blank check for anyone to do anything but a mutual trust that each of you want the best for each other, and the mathematics for this worked out in the study. He pointed out that their data strongly supports that “mutual trust” leads to intimacy, as this is driven by an interest in each other’s journey. It was also interesting that their data found that affairs are borne more out of loneliness (borne out of a feeling that your partner is not interested in your story) than the desire for sex.

With “commitment,” Gottman described it not just as a “paper vow” the way we sometimes hear people cite legal and religious ceremonial vows. He refers to “commitment” as thoughtful affirmations of what you have both gone through together as a couple and that this is the journey of your life. Their studies have shown that making these affirmations – that what your connected lives have brought you to realize as a couple, that you are indeed each other’s anchor amid the changing seas in your lives – is a wielder of the magic of “forever.”

“Calm” was really measured in the Gottman studies by physiological marks – like heart rate, blood pressure, and skin conductance, which are tell-tale signs of how flooded you are with your own emotions that you cannot hear and bear to the presence of your beloved. Gottman found that keeping calm really made the difference especially in tense situations.

If love is what you have and want to keep, then, science says to trust and commit. And keep calm so you can see “forever” rising. Happy Valentine’s. – Rappler.com