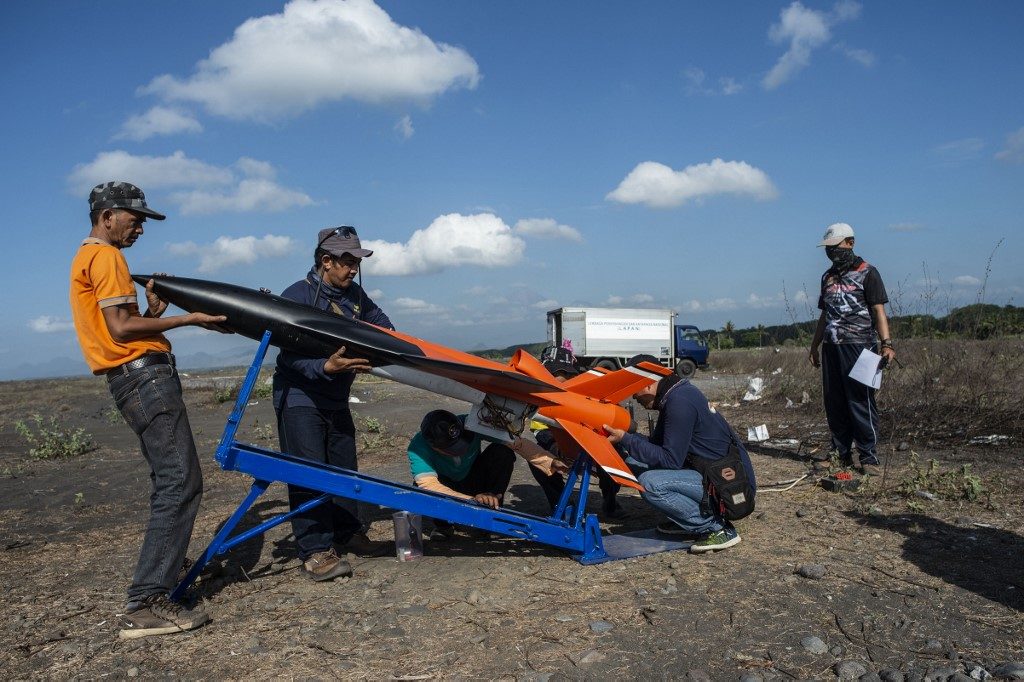 Facebook Twitter Copy URL
Copied
'We've got a dream to put our own satellite-launching rocket 200 or 300 kilometers into space within 5 years,' says head of Indonesia's Rocket Technology Centre. Some experts question how realistic that timeline is.

With a 3,2,1 blast off, the two-meter-long projectile belches a trail of fire and then soars a few hundred meters before crashing in a heap – earning a thumbs up from scientists who declared the test a success.

It’s a very long way from a Mission Control in Houston, but the Southeast Asian archipelago’s answer to NASA has big hopes and is now planning to build its first spaceport on a tropical island off the coast of easternmost Papua.

“We’ve got a dream to put our own satellite-launching rocket 200 or 300 kilometers into space within 5 years,” said Lilis Mariani, head of the Rocket Technology Centre at the National Institute of Aeronautics and Space, known as Lapan.

Some experts question how realistic that timeline is, and officials acknowledge much will depend on whether Jakarta stumps up the necessary funds.

There is resurgent international interest in space travel and colonization, with NASA planning to send two astronauts to the moon by 2024, some 55 years after their last mission there. The Trump administration has pledged to increase funding for the project and is also making plans for travel to Mars.

SpaceX, a private US firm launched by Tesla chief Elon Musk, has said its first crewed flight will launch in the first half of this year, while Virgin Galactic plans a series of missions in the next three years.

Indonesia’s space agency is a relative minnow, dwarfed in Asia by counterparts in Japan, China and India.

Lapan has had some success with developing research satellite technology, but it wants to make its mark in space flight by sending a homegrown rocket into orbit.

Back at the launch site on East Java, Lapan’s scientists were gauging the tiny test rocket’s speed, movement and other specifications.

“It was stable on take off and moved well,” said Sri Kilawati, head of the Centre’s rocket control program.

“The objective was to study rocket control. They travel at a very high rate of speed so you’ve got to observe their behavior,” she added.

“Lapan is still far behind in terms of launch technology, although it has been quite successful in developing satellites,” he explained, adding: “The engineers at Lapan haven’t fully mastered rocket technology yet.”

“Funding comes from state coffers so it depends a lot on the government’s priorities,” she said.

Still, the East Java rocket test underlined Indonesia was pushing toward the orbital launch goal, even if a five-year timeline was ambitious, said Leena Pivovarova, an analyst at US-based Northern Sky Research.

“In the grand scheme of rocket development you can think of this as a step in the right direction,” she said.

“This is toward a larger purpose of achieving orbital launch capability.”

Inspiring the next generation

Indonesia’s space aspirations began in the early sixties with the creation of Lapan and it was one of the first developing nations to have communications satellites launched into space by the United States, where they were made.

It planned to send an astronaut into space with NASA, but the bid was shelved in the wake of the 1986 Space Shuttle Challenger crash and no other opportunities have come to pass.

But now Lapan is now talking to its Russia counterpart about sending one of its astronauts on a future mission – though there are few concrete details so far.

Indonesia has cooperated on technology with counterparts in the US, Germany, Japan and the Ukraine among others over the years.

Two of its homegrown satellites – used in research to mitigate natural disasters – were launched into orbit by India in 2015.

But the lack of infrastructure remains a serious problem.

In November, Indonesia finally confirmed plans to construct its first spaceport off the coast of Papua, acknowledging that its existing launch site is too risky for large rocket launches because it is too small and in a densely populated area.

The new location on the equator is also ideal as it cuts fuel costs and could potentially draw interest from other countries keen to launch satellites, experts said.

Getting one of its own citizens into orbit would bolster the nation’s space record.

“An Indonesian astronaut could boost (its) space profile internationally,” said Phil Smith, an analyst at US-based Bryce Space and Technology.

He added: “But it would more significantly inspire Indonesian citizens.” – Rappler.com