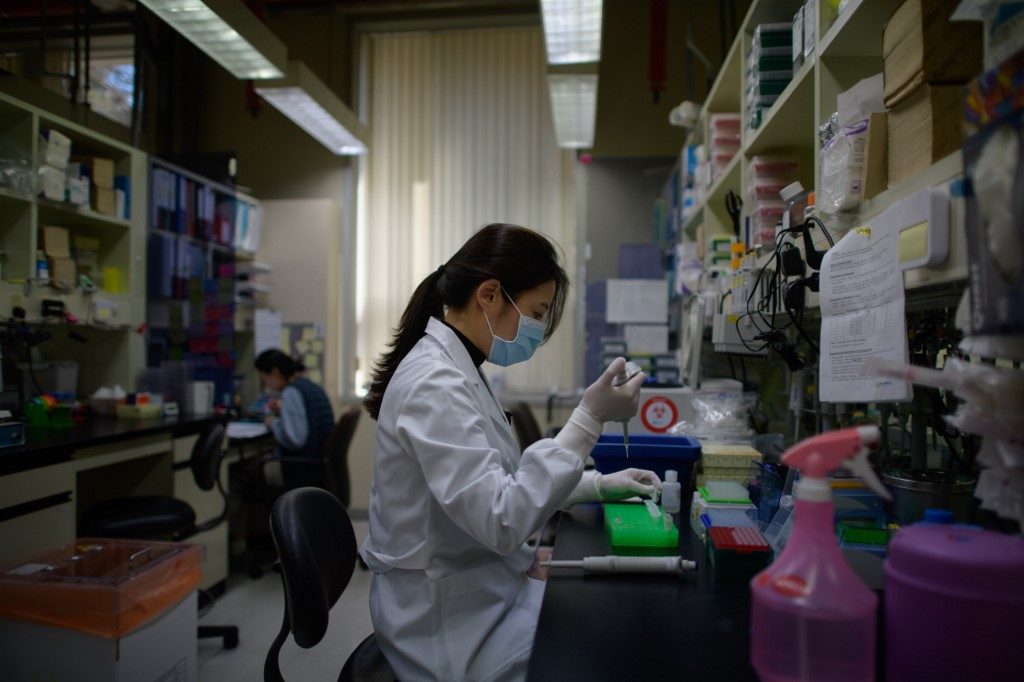 Facebook Twitter Copy URL
Copied
But it may be another year to 18 months before it becomes available, once it has passed more trial phases to prove it works and is safe

WASHINGTON, USA – The first human trial to evaluate a candidate vaccine against the new coronavirus has begun in Seattle, US health officials said Monday, March 16, raising hopes in the global fight against the disease.

But it may be another year to 18 months before it becomes available, once it has passed more trial phases to prove it works and is safe.

The vaccine is called mRNA-1273 and was developed by US National Institutes of Health (NIH) scientists and collaborators at biotechnology company Moderna, which is based in Cambridge, Massachusetts.

Funding was also provided by the Oslo-based Coalition for Epidemic Preparedness Innovations (CEPI).

There are currently no approved vaccines or treatments against the coronavirus disease, known as COVID-19, which has infected more than 175,000 people across the world since it was first identified in central China in late December.

It has claimed 7,000 deaths, according to an AFP tally, most in China followed by Italy.

“Finding a safe and effective vaccine to prevent infection with SARS-CoV-2 is an urgent public health priority,” said Anthony Fauci, head of infectious diseases at the NIH, using the technical name for the virus that is believed to have originated in bats.

“This Phase 1 study, launched in record speed, is an important first step toward achieving that goal.”

The Seattle trial will study the impact of different doses delivered by intramuscular injection in the upper arm, with participants monitored for side-effects like soreness or fever.

Coronaviruses are spherical and have spikes protruding from their surface, giving them a crown-like appearance. The spike binds to human cells, allowing the virus to gain entry.

The Moderna candidate vaccine carries the genetic information of this spike in a substance called “messenger RNA.”

Injecting human tissue with the spike’s messenger RNA makes it grow inside the body, thereby eliciting an immune response without having actually infected a person with the full-blown virus.

Pharmaceuticals and research labs around the world are racing to develop both treatments and vaccines to the new coronavirus. (READ: German biotech firm denies Trump $1 billion vaccine offer)

An antiviral treatment called remdesivir, made by US-based Gilead Sciences, is already in the final stages of clinical trials in Asia and doctors in China have reported it has proven effective in fighting the disease.

But only randomized trials allow scientists to know for sure whether it really helps or whether patients would have recovered without it.

Another US pharma called Inovio, which is creating a DNA-based vaccine, has said it will enter clinical trials next month.

Regeneron is trying to isolate coronavirus-fighting antibodies that can be administered intravenously to confer temporary immunity, and hopes to start human trials by summer.

According to the World Health Organization, 80% of COVID-19 cases are mild, 14% are severe, and about 5% are critical, resulting in severe respiratory illness that causes the lungs to fill with fluid which in turn prevents oxygen from reaching organs.

Patients with mild cases recover in a week or two while severe cases can take 6 or more weeks.

Recent estimates suggest about 1% of all infected people die. – Rappler.com