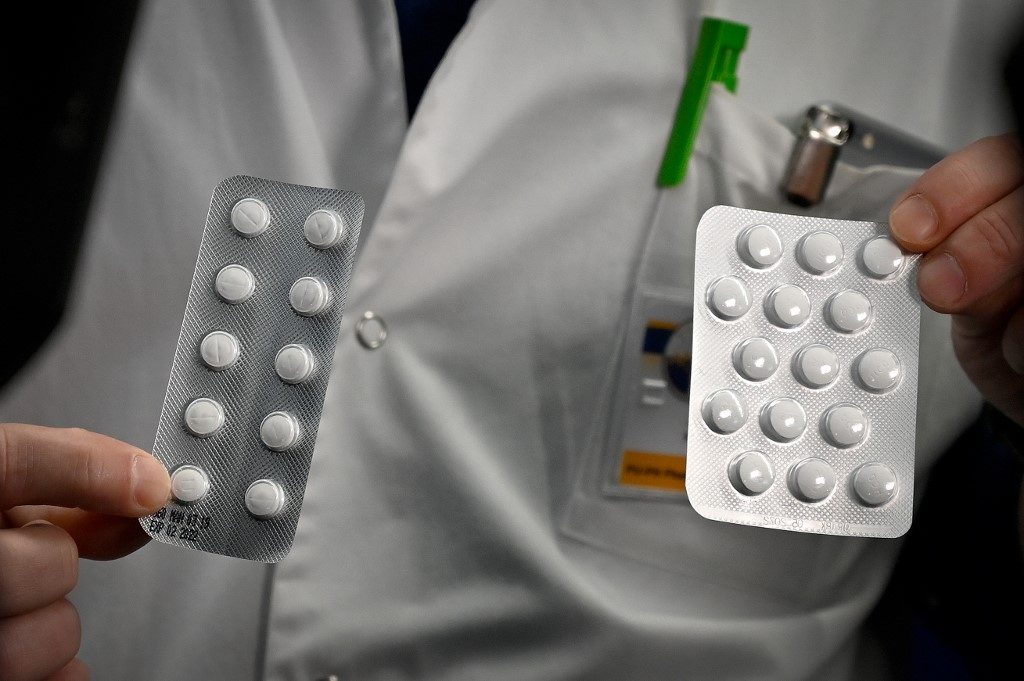 GENEVA, Switzerland (UPDATED) –  The World Health Organization suspended trials of the drug that Donald Trump has promoted as a coronavirus defense, fuelling concerns about the US president’s handling of the pandemic that has killed nearly 100,000 Americans.

Trump has led the push for hydroxychloriquine as a potential shield or treatment for the virus, which has infected nearly 5.5 million people and killed 345,000 around the world, saying he took a course of the drug as a preventative measure.

Brazilian President Jair Bolsonaro has also heavily promoted hydroxychloroquine while the virus has exploded across nation, which this week became the second most infected in the world after the United States.

But the World Health Organization said Monday it was halting testing of the drug for COVID-19 after studies questioned its safety, including one published Friday that found it actually increased the risk of death.

The WHO “has implemented a temporary pause… while the safety data is reviewed”, its chief Tedros Adhanom Ghebreyesus said, referring to the hydroxychloroquine arm of a global trial of various possible treatments.

Trump announced last week he was taking the drug, explaining he had decided to take after receiving letters from a doctor and other people advocating it.

“I think it’s good. I’ve heard a lot of good stories,” Trump told reporters then, as he declared it safe.

Trump dismissed the opinions then of his own government’s experts who had warned of the serious risks associated with hydroxychloroquine, with the Food and Drug Administration highlighting reported poisonings and heart problems.

Trump has been heavily criticized for his handling of the virus, after initially downplaying the threat and then repeatedly rejecting scientific analysis.

The United States has by far the world’s highest coronavirus death toll, reaching 98,218 on Monday, with more than 1.6 million confirmed infections.

Despite the WHO suspension, Brazil’s health ministry said Monday it would keep recommending hydroxychloroquine for COVID-19.

“We’re remaining calm and there will be no change,” health ministry official Mayra Pinheiro told a news conference.

Bolsonaro is a staunch opponent of lockdown measures and like Trump has played down the threat of the virus, even as Latin America has emerged as the new global virus hotspot.

Brazil has reported nearly 375,000 cases, widely considered to be far fewer than the real number because of a lack of testing, and more than 23,000 deaths.

Chile also is in the grip of a virus surge, with a record of nearly 5,000 infections in 24 hours on Monday.

‘Thrilled to break the isolation’

While South America and parts of Africa and Asia are only just beginning to feel the full force of the pandemic, many European nations are easing lockdowns as their outbreaks are brought under control.

In hard-hit Spain, Madrid and Barcelona on Monday emerged from one of the world’s strictest lockdowns, with parks and cafe terraces open for the first time in more than two months.

And slowing infection rates in Greece allowed restaurants to resume business a week ahead of schedule — but only for outdoor service.

“The cafe in Greece has a social dimension, it’s where the heart of the district beats.”

Despite the encouraging numbers, experts have warned that the virus could hit back with a devastating second wave if governments and citizens are careless, especially in the absence of a vaccine.

The latest reminder of the threat came from Sweden, where the COVID-19 death toll crossed 4,000 – a much higher figure than its neighbors.

The Scandinavian nation has gained international attention — and criticism — for not enforcing stay-at-home measures like other European countries.

‘What will happen if I die’

The extended lockdowns, however, have started to bite globally, with businesses and citizens wearying of confinement and suffering immense economic pain.

Unprecedented emergency stimulus measures have been introduced, as governments try to provide relief to their economies, with the airline and hospitality sectors hit particularly hard because of travel bans.

Lufthansa became the latest major global company to be rescued, as the German government agreed a 9 billion euros ($9.8 billion) bailout for one of the world’s biggest airlines.

But analysts have warned that the pandemic’s economic toll will be even more painful for countries far poorer than Western nations.

In the Maldives, a dream destination for well-heeled honeymooners, tens of thousands of impoverished foreign labourers have been left stranded, jobless and ostracised as the tiny nation shut all resorts to stop the virus.

“We need money to survive. We need our work,” said Zakir Hossain, who managed to send about 80 percent of his $180 a month wage to his wife and four children in Bangladesh before the outbreak.

“I heard that if a Bangladeshi worker dies here, they don’t send his body back and he is buried here,” he said. “I am worried what will happen if I die.” – Rappler.com