From Elvis to E.T.? The Voyagers’ extraordinary tale

Sep 13, 2013 10:33 PM PHT
Facebook Twitter Copy URL
Copied
The Voyager 1's journey in outer space, running for over 3 decades now, continues. "It will be intriguing to see what happens next" 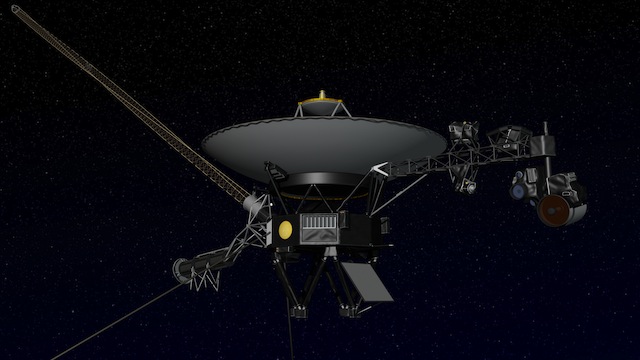 PARIS, France – America in 1977 was mourning the sudden death of Elvis Presley when NASA launched two probes on an unprecedented mission to explore the Solar System’s giant outer planets.

Today, 36 years on, Voyager 1 has become the first spacecraft to leave our neighbourhood and venture into the loneliness of interstellar space, according to data published on Thursday.

It is 19 billion kilometres (12 billion miles) from home.

Like its sister Voyager 2, also heading to the boundaries of the Solar System on a different trajectory, the 722-kilo (1,500-pound) scout bears a time capsule — a gold-plated disk providing images and sounds of life on Earth in 1977 for any intelligent alien it may encounter.

Rosine Lallement of the Paris Observatory told AFP that Voyager 1 was now literally pushing back the frontier of knowledge.

“For the first time, a probe is an environment that has never been experienced before by a man-made object.”

“It will be intriguing to see what happens next,” she said.

The Voyagers were originally designed to conduct close-up studies of Jupiter and Saturn, Saturn’s rings, and the larger moons of the two planets.

They were then ordered to carry out additional flybys of the two outermost giant planets, Uranus and Neptune.

After this feat, the spacecraft were sent on the ultimate trip: to the edge of the Solar System and beyond.

Voyagers 1 and 2 are identical craft, fitted with television cameras (since switched off to save power and computer memory), infrared and ultraviolet sensors, magnetometers, plasma detectors and cosmic-ray and charged-particle sensors. They use a small radioactive source for electricity at this huge distance from the Sun.

Signals back home are sent with a power of about 20 watts, equivalent to a refrigerator light bulb, making them so faint they can only be picked up by NASA’s huge “ears,” the Deep Space Network.

A key moment came in 2004, when Voyager 1, then about 14 billion kilometres (8.7 billion miles) away, crossed the “termination shock,” or when the particles spewed out from the Sun, called the solar wind, start to interact with cosmic rays from interstellar space.

In 2010, it reached a kind of doldrums where the solar wind peters out.

A further two years later, a surge in high-energy particles detected by its cosmic-ray sensor indicated the tough little explorer had reached the heliopause, which divides the Sun’s zone of influence from interstellar space.

Transition of this wide boundary has taken a long time to figure out but now, says Voyager project scientist Ed Stone, it is confirmed.

Data sent back by the two probes has already confounded textbook depictions of the Solar System as being spherical.

Instead, the Sun’s neighbourhood, the heliosphere, is egg-shaped.

The “bottom” of the egg is flattened by a permanent clash between the solar wind and the blast of particles from other stars.

Lallement said astrophysicists were now eager to know if Voyager 1 will confirm their theories about the space between the stars.

“If one day we send out probes to neighbouring stars, what kind of environment can we expect for them?” she asked.

“Until now, all of our theories are based on computer models, not on observed data.”

Voyager’s instruments will have to shut down permanently in 2025, the US journal Science reported on Thursday.

However, experts say the spacecraft may keep traveling indefinitely, advancing outward at more than 17 kilometres per second, or 38,000 miles per hour.

That may seem fast, but space is big.

It will be within 1.7 light years of a minor member of the constellation Ursa Minor (the Little Bear or Little Dipper) called AC+79 3888, the National Aeronautics and Space Administration says on its website. – Rappler.com