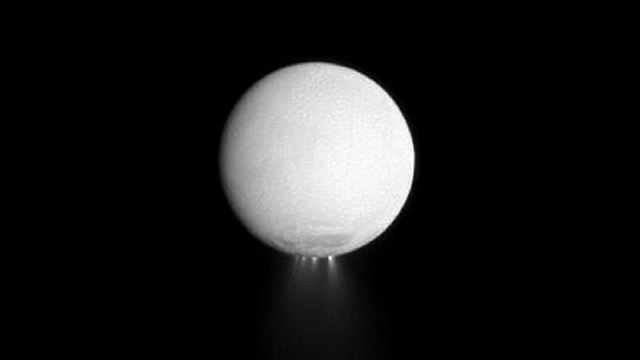 WASHINGTON, DC, USA – Saturn’s moon Enceladus is home to an ocean of melted water beneath its surface, and could be a source for alien microbes, scientists said Thursday, April 3.

The first measurements of the subsurface water at the south pole of the small and icy moon were made by the US space agency’s Cassini spacecraft, and are described in the journal Science.

The body of water is about the size of Lake Superior, the second largest lake on Earth, and has a rocky bottom which could create conditions that allow tiny life forms to thrive.

Researchers first raised the possibility of a below-ground ocean on Enceladus in 2005, after water vapor was detected spewing from vents near the moon’s southern pole.

“Their discovery expanded our view of the ‘habitable zone’ within our solar system and in planetary systems of other stars,” she added.

“This new validation that an ocean of water underlies the jets furthers understanding about this intriguing environment.”

The Cassini spacecraft detected the shape of Enceladus’ gravity field during three flybys from 2010 to 2012.

The gravitational tug exerted on the unmanned orbiter was carefully analyzed for clues about what the interior of Enceladus contained.

“For the first time, we have used a geophysical method to determine the internal structure of Enceladus,” said co-author David Stevenson, professor of planetary science at Caltech.

“This then provides one possible story to explain why water is gushing out of these fractures we see at the south pole.”

The spacecraft was launched 2004 and has visited all of Saturn’s largest moons.

The sixth planet from the Sun, Saturn is characterized by its unusual rings and has 53 known moons and nine provisional moons. – Rappler.com