Ebola outbreak speeds up efforts to find a vaccine

Aug 2, 2014 4:25 PM PHT
Facebook Twitter Copy URL
Copied
There is currently no such medication in the pipeline to treat Ebola. In the meantime, experts can only urge preventive measures 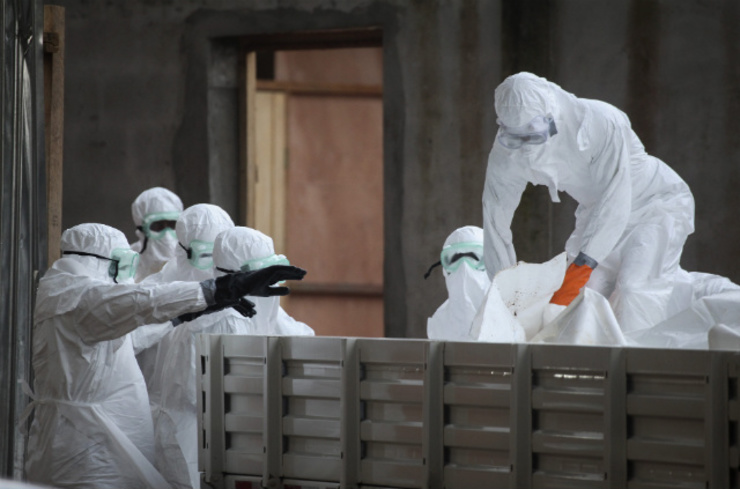 WASHINGTON DC, USA – There is no vaccine on the world market to protect against the deadly Ebola virus, but experts say the fast-growing outbreak in West Africa is speeding efforts to test one.

The first attempts to develop a vaccine for the hemorrhagic fever began shortly after it first emerged in 1976, but lack of funding from the pharmaceutical industry has long stalled these efforts, according to scientists.

Next month, the US government’s National Institutes of Health plan to start an early, phase I study in humans of a vaccine candidate that has shown promise in tests on monkeys.

“We are starting to discuss some deals with pharmaceutical companies to help scale it up on an emergency basis,” said Anthony Fauci, director of the National Institute of Allergy and Infectious Diseases.

“It might be available in 2015 for health workers who are putting themselves at extreme risk.”

Meanwhile, West Africa is facing the largest outbreak of Ebola in history, which is crippling the region’s health care system and outpacing containment efforts.

The virus causes fever, vomiting, diarrhea and bleeding. It has killed around 60% of those infected since March, and taken more than 700 lives. (READ: Ebola: a ruthless killer)

Ebola can be fatal within a week of the first sign of symptoms, and can spread among the living like “forest fire,” the US Centers for Disease Control and Prevention have warned.

In the past, the prospect of victims numbering in the thousands in the developing world has failed to entice drug companies to invest in a vaccine for Ebola. (READ: World Ebola fears grow: Europe, Asia on alert)

Nevertheless, “several of the vaccine platforms are ready for clinical trials,” they wrote.

Some of these vaccines have already shown 80 to 90% effectiveness in tests on monkeys, and none have had life-threatening side effects, said Cambridge University lecturer Peter Walsh.

But the process has been complicated by regulators who say trying an unproven vaccine on humans would be unethical.

“This argument – that it is unethical to use non-licensed vaccines – is just crazy,” Walsh told Agence France-Presse (AFP), adding that the vaccine NIAID is working on has already been a decade in the making.

“The ethical thing to do is to treat them, to vaccinate them (in West Africa). It is a no-brainer. It is scandalous that we are not doing that.”

Even if an experimental vaccine or treatment were to be doled out in the affected countries – Guinea, Liberia, Nigeria and Sierra Leone – plenty of questions remain about how it would be distributed, and to whom.

Marzi and Feldmann said in their paper that Ebola outbreaks, or bioterrorism, would demand “ring vaccination and protection of local medical personnel and other high-risk exposure groups, such as family members.”

Such a strategy demands an immunization that is fast-acting and easy to deliver, and one that is available in large dose amounts from industry or federal stockpiles.

This raises even more questions about whether a vaccine can help, said Herve Raoul, a leading expert on pathogens and research director at the French Institute of Health and Medical Research (INSERM).

“A vaccine is only effective after a certain period, generally at least three weeks prior to exposure,” he told AFP.

“The ideal thing today would be to develop an antiviral drug that would help sick people get through the most acute phase of the illness.”

However, there is currently no such medication in the pipeline to treat Ebola.

In the meantime, experts can only urge preventive measures, including isolating infected patients, taking special precautions to avoid contact with bodily fluids and swiftly burying the dead. (READ: Ebola death toll rises to 729: WHO)

Walsh said he was hopeful that the ongoing outbreak will lead to changes in the status quo when it comes to drug development for diseases like Ebola.

“The way things happen is in a crisis,” he said. (READ: West Africa seeks to seal off Ebola-hit regions)

“When something nasty happens, it is an opportunity to do something that otherwise would not be politically possible.” – Rappler.com