Aug 12, 2014 11:15 AM PHT
Shaira Panela
Facebook Twitter Copy URL
Copied
The story of this National Scientist's discovery of the chemical that helped launched Philippine mangoes in the international market is one for the books 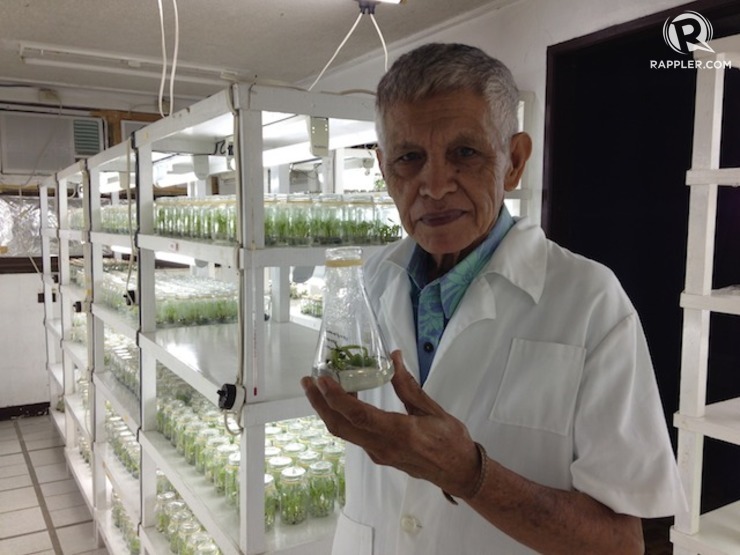 LOS BAÑOS, Philippines – The story of Dr. Ramon Barba’s discovery of the chemical that helped launched Philippine mangoes in the international market is one for the books. This very same chemical also launched his career in plant physiology, and ultimately, helped pave the way for him to be called a National Scientist.

Dr. Ramon Barba, at 74, clearly remembers how he came out with potassium nitrate or saltpeter as a spray for mangoes to grow more flowers.

Saltpeter or “salitre” can be found in fertilizers, fireworks, gunpowder, and in some processed meat like tocino.

Barba told Rappler that since the 1950s, Filipinos had been burning leaves and other materials under mango trees for them to grow better and produce flowers.

One of the questions that captured his interest was what kind of chemical present in smoke speeds up the the growth of mango blossoms. Some studies related on the subject had already been published; some say it’s because of the heat of the smoke, others thought the mango branches and flowers react to a chemical called ethylene, a “sweet and musky” flammable gas.

Barba had just completed his bachelor’s degree in agriculture at the University of the Philippines Los Baños (UPLB) in 1958. He was invited to join the academe after his graduation. After two years, he received a scholarship to pursue graduate studies in the United States.

In Hawaii, he was able to meet one of the pioneers of the plant growth regulator research, Professor A. Carl Leopold, who taught there for one semester. Barba and Leopold talked from time to time, discussing research.

Barba said that Leopold had already published a book before they met. “Pero wala siyang na-mention tungkol sa potassium nitrate,” Barba told Rappler. (But he did not mention anything about potassium nitrate.)

When Leopold left Hawaii, he published another study which said that a chemical called “Ethrel,” which is now commercially produced by companies like Bayer, is also an effective growth regulator on crops.

Before leaving the United States in 1968, Barba bought Ethrel to be used for possible studies in the future.

The following year, he was appointed as an Assistant Professor at UPLB. He proposed a study on the University on “Ethrel” but was rejected because someone else has already been studying chemicals that regulate the growth of plants.

But he did not stop there. He even tried to collaborate with the person studying plant growth regulators. Again, he was rejected.

An opportunity to pursue his research came after he was hired as a consultant in a mango plantation.

The owners of Quimara Farms in the Novaliches–San Jose del Monte, Bulacan area, Mr. and Mrs. Quimson asked him to help them increase their mango production.

On Saturdays, the family driver fetches him from Balara in Quezon City and brings him to the farm. Not too long after he started his stint in the farm, he asked the owners if he could experiment in their farm at his expense.

He had already bought “salitre” at 50 centavos a kilo from Mercury Drug store as the chemical went on sale toward the end of the year – intended for curing Christmas hams.

The owners agreed, provided that he conducted his study on days that he does not work – on Sundays.

He used his favorite chemical, “Ethrel,” “salitre,” among others on marked branches of mango trees.

In two weeks, on a Saturday, during his consultancy duty, he noticed the flowering of the branches where he sprayed potassium nitrate. He called the owner to tell about the results.

He then asked to spray the chemical to 100 trees which corresponds to a hectare of the plantation to which the owners agreed as they benefited from the study.

By 1970, the University recommended big scale application of the study. Within four and a half months, they found that the trees bore lots of fruits.

But as he was about to publish the study, someone else in the country decided to apply for a patent using the same chemical.

He contested the patent application, citing his study. He eventually won the intellectual property with the help of then Senator Jose W. Diokno.

However, he never pursued his patents as he was not really interested in making money out of his study. He wanted farmers to benefit from the mango induction technology he founded.

He was recognized for this study, among his other contributions in horticulture. He was one of The Outstanding Young Men (TOYM) in 1974. He has received the Rizal Pro Patria Presidential Award for Tissue Culture in 1980, and more recently, the SEARCA-Dioscoro L. Umali Achievement Award in Agricultural Development.

Currently, he resides in Los Baños, visiting the University from time to time and helping the Institute for Plant Breeding in their studies.

His protege, Lilian Pateña of the Institute of Plant Breeding at UPLB, has known the National Scientist since after she graduated from her bachelor’s degree, also at UPLB. For more than 30 years, Barba has served as her mentor, critic, colleague and family all at the same time.

Pateña is also an internationally-recognized scientist specializing on tissue culture of plants. Her studies have been recognized and adopted in other countries like Columbia, Malaysia, Indonesia, Thailand, among others. Among their first collaborations is the research on tissue culture of calamansi and pomelo in 1978.

She describes “RCB,” as she is used to calling Barba through his initials as very creative.

She added, “You have to distinguish kung ano ang doable in terms of manpower and resources.”

But Pateña said that she appreciates that Barba gives her freedom to think and do research.

But most of all, what Pateña remembers that she got from Barba is that she should work hard all the time.

“You get good pay for a job well done… It’s either you work for free or you get good pay for the job,” Pateña added. She also said that because not everyone can pay well, it’s better to do the job as part of public service. – Rappler.com