Sep 2, 2014 4:01 PM PHT
Facebook Twitter Copy URL
Copied
The probe, named Hayabusa-2, is expected to be flung into space on a rocket for a mammoth four year voyage to the unpoetically-named 1999JU3 asteroid 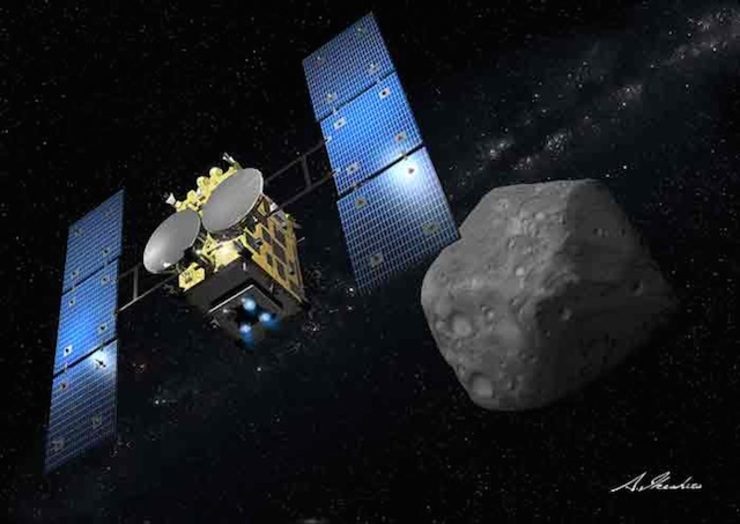 TOKYO, Japan – Japanese space scientists have unveiled the asteroid hunting space probe they hope to launch later this year on a mission to mine a celestial body.

The probe, named Hayabusa-2, is expected to be flung into space on a rocket for a mammoth four year voyage to the unpoetically-named 1999JU3 asteroid.

When it gets there, some time in 2018, it will release a powerful cannon which will fire a metal bullet at the asteroid’s barren crust, once the probe itself has scuttled to safety on the far side of the rock.

It will then return to scoop up material uncovered by the cannon blast.

If all goes well, these pristine asteroid samples will be returned to Earth by the time Tokyo hosts the Olympic Games in 2020.

At a weekend press conference, Hitoshi Kuninaka, project leader at the Japan Aerospace Exploration Agency (JAXA) said he and his team were readying to redouble their efforts for this “new voyage”.

“I’m grateful as the new asteroid probe is now nearly complete,” he said, according to Jiji Press.

The probe is the successor to JAXA’s first asteroid explorer, Hayabusa – the Japanese term for falcon – which returned to earth in 2010 with dust samples after a trouble-plagued seven-year mission.

The spherical 1999JU3 asteroid, which is around a kilometer (half a mile) across, contains significantly more organic matter and water than the potato-shaped rock previously studied by the original Hayabusa.

Analysing this valuable cosmic material could shed light on the mysteries surrounding the solar system and its origins 4.6 billion years ago.

Scientists at JAXA say Hayabusa-2 will build on the work of its predecessor, which was only able to collect surface dust samples that could have been altered by years of exposure to various forms of energy encountered in space.

Despite various setbacks during its epic seven-year journey, including intermittent loss of communication and damage to its motors, the first Hayabasa was hailed as a triumph of science when it returned to Earth.

JAXA’s work guiding the craft back to terra firma made it a source of pride for Japan, even inspiring several Japanese feature films.

Kuninaka said there were a number of possible complications and pitfalls that could await Hayabusa-2.

“Of course, I hope things will go smoothly,” said Kuninaka.

“We have had many difficulties in the process of developing the new asteroid probe. Space is never an easy place,” he said.

Asteroids are believed to retain materials unchanged from the solar system’s earliest days, unlike scorched remains such as meteorites or materials on Earth which have been transformed through pressure and heat.