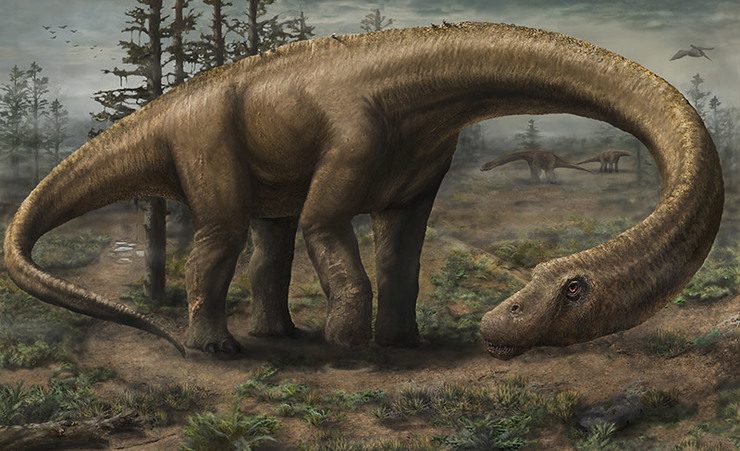 Facebook Twitter Copy URL
Copied
Dreadnoughtus schrani, a supermassive dinosaur that would have weighed as much as 60 small cars, is discovered Argentina

PARIS, France – A supermassive dinosaur that would have weighed as much as 60 small cars has been found in Argentina, where it likely perished in a bog some 77 million years ago, paleontologists said Thursday, September 4.

Dubbed Dreadnoughtus schrani (the ‘Dreadnoughtus‘ part coming from “fear nothing” in old English), the long-necked lizard would have measured 26 meters (85 feet) from nose to tail and weighed some 60 tons – about as much as seven Tyrannosaurus rex put together.

And the giant wasn’t even fully grown when it got bogged down in a flooded plain, where it died next to a smaller companion, researchers reported in the journal Scientific Reports.

“With a body the size of a house, the weight of a herd of elephants, and a weaponized (9-meter, muscled) tail, Dreadnoughtus would have feared nothing,” study co-author Kenneth Lacovara of Drexel University in Philadelphia said of the mighty beast.

The fossilized skeleton is the most complete yet found in the category of super-sized, plant-eating dinosaurs called Titanosaurs – which makes it the largest land animal for which a weight has been calculated with such a degree of accuracy.

The find comprised over 70% of the types of bones in the dinosaur’s body – 45% of its total skeleton. There were no skull bones.

Paleontologists uncovered most of the vertebrae from the lizard’s tail, a neck vertebra with a diameter of over one yard (0.9 meters), ribs, toes, a claw, a section of jaw and a tooth, and nearly all the bones from its four limbs, including a humerus (upper arm bone) and a femur (thigh bone) over six feet tall.

The femur and humerus are key to calculating the mass of extinct four-legged animals.

“Because the Dreadnoughtus type specimen includes both these bones, its weight can be estimated with confidence,” said a Drexel University statement.

“It is by far the best example we have of any of the most giant creatures to ever walk the planet,” added Lacovara, who discovered the skeleton in southern Patagonia in 2005 and oversaw its four-year excavation.

To sustain its massive bulk, Dreadnoughtus would have had to eat vast quantities of plants growing in the temperate forest on the continent’s southern tip.

“I imagine their day consists largely of standing in one place,” said Lacovara.

“You have this 37-foot-long (11-meter) neck balanced by a 30-foot-long (9-meter) tail in the back. Without moving your legs, you have access to a giant feeding envelope of trees and green ferns. You spend an hour or so clearing out this patch that has had thousands of calories in it, and then you take three steps over to the right and spend the next hour clearing out that patch.”

The dimensions of all previously discovered supermassive dinosaurs had been pieced together from relatively fragmentary fossil remains.

Prior to Dreadnoughtus, another Patagonian giant, Elaltitan, held the title for the dinosaur with the greatest calculable weight, at 43 tons. Argentinosaurus, also from Argentina, was thought to be of a comparable or even greater mass than Dreadnoughtus, and longer, at about 37m.

But Argentinosaurus is known only from a half-dozen vertebrae in its mid-back, a shinbone and a few other fragments but no upper limb bones, said the researchers.

An adult Dreadnoughtus would likely have been too large to fear any predators, but would have made a great feast for scavengers after their death, the team added.

They discovered several teeth of small predatory and scavenging dinosaurs at the excavation site, which also included a second Dreadnoughtus skeleton, though smaller and much less complete.

From the preservation of the skeletons, the team concluded the Dreadnoughtus pair was buried soon after death, but not before their carnivore cousins took a few bites.

“These two animals were buried quickly after a river flooded and broke through its natural levee, turning the ground into something like quicksand,” said Lacovara.

“The rapid and deep burial of the Dreadnoughtus type specimen accounts for its extraordinary completeness.

“It’s misfortune was our luck.” – Rappler.com