Sep 12, 2014 8:56 AM PHT
Facebook Twitter Copy URL
Copied
Scientists are not yet sure exactly what will happen when they bounce off the Earth's protective shield

WASHINGTON, DC, USA – Two big explosions on the surface of the sun will cause a moderate to strong geomagnetic storm on Earth in the coming days, possibly disrupting radio and satellite communications, scientists said Thursday, September 11.

The unusual storm is not likely to wreak havoc with personal electronics but may cause colorful nighttime auroras, or displays of the Northern Lights, late Friday and early Saturday. 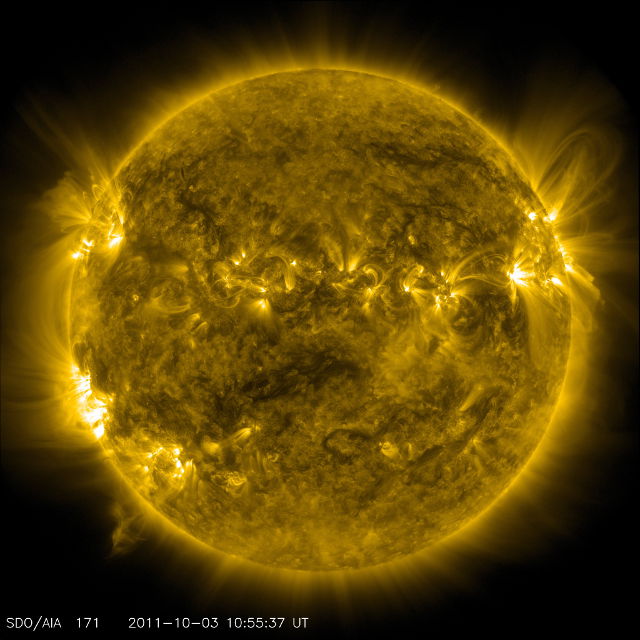 “We don’t expect any unmanageable impacts to national infrastructure from these solar events at this time but we are watching these events closely,” said Thomas Berger, director of the Space Weather Prediction Center at the National Oceanic and Atmospheric Administration.

“More pleasantly, we do expect these storm levels to cause significant auroral displays across much of the northern US on Friday night,” he said.

The storm began with a minor solar flare on Monday, followed by a major X-class flare – the strongest classification – on Wednesday at around 1745 GMT.

Both eruptions came from the same sunspot near the center of the solar disk, and both produced significant coronal mass ejections, or CMEs, of magnetized plasma headed toward Earth.

On a scale of one to five, the resulting geomagnetic storm should be “moderate to strong,” rating a G2 or G3, Berger said.

“It is fairly rare for two CMEs of this magnitude to come in close succession like this,” he told reporters.

“Because of this we cannot rule out higher storm levels perhaps as high as G4 or severe geomagnetic storming, particularly in the polar regions.”

The strength of the storm pales in comparison to major geomagnetic storms of years past, such as the 1859 Carrington event that wiped out power across a swath of Canada.

It is also weaker than a near-miss geomagnetic storm in July 2012 that NASA scientists said could have knocked Earth’s technology back at least 150 years.

That storm didn’t cause mass damage because the fast-moving energized particles were not directed straight at Earth.

“The events that just occurred over the last 24 hours were Earth-directed, they are just not that big,” said William Murtagh, program coordinator at the Space Weather Prediction Center.

“If we had a very big storm — and this is not it — that produced big problems with the power grid, that would be our biggest concern.”

Nor is the radiation caused by these flares presently enough to raise concern for astronauts at the International Space Station, experts said.

But given the nature of CMEs with their internal magnetic fields, scientists are not yet sure exactly what will happen when they bounce off the Earth’s protective shield.

“The sun just shot out a magnet that is going to interact with another magnet, the Earth’s magnetic field,” explained Murtagh.

“And how they couple together is going to be critical in determining how intense the geomagnetic storm is going to be.” – Rappler.com