MANILA, Philippines – It was once the 4th largest inland body of water in the world. Now, nearly all of the formerly great Aral Sea is a dry, lifeless expanse of land, much like the desert region that surrounds it.

Dramatic satellite images posted by NASA’s Earth Observatory on Tuesday, September 30, showed what the inland sea now looks like from space, after just a few decades of human intervention in the area – one of the “worst environmental disasters” the world has seen in recent years, as UN Secretary-General Ban Ki-moon put it in 2010.

The Aral Sea sits in between Kazakhstan and Uzbekistan, surrounded by a mostly desert ecosystem, and covering an area of 68,000 square kilometers.

Two major rivers fed the Aral with water – the Amu Darya and the Syr Darya – bringing snowmelt and precipitation from the mountain regions to the lake. However, due to major water diversion projects meant to enrich agriculture in the plains of Kazakhstan, Uzbekistan, and Turkmenistan during Soviet rule in the 1960s, the Aral slowly shrunk.

The toll of development on the once-mighty Aral – previously a major fishing area and home of a Russian naval fleet – can be seen in a series of images taken using the Moderate Resolution Imaging Spectroradiometer (MODIS) of NASA’s Terra satellite, taken from August 2000 to August 2014.

The images showed the original outline of the Sea (in black), which as of 2000 had already shrunk to just 10% of its original size, causing the formation of two distinct bodies of water, the Northern (Small) Aral and the Southern (Large) Aral.

As the 2000s progressed, the watery areas slowly shrunk; in 2001, the two Arals were completely cut off from each other, and then eventually the Southern Aral split into two.

No part of the lake has shrunk to these levels in modern times, geographer and Aral Sea expert Philip Micklin told NASA. 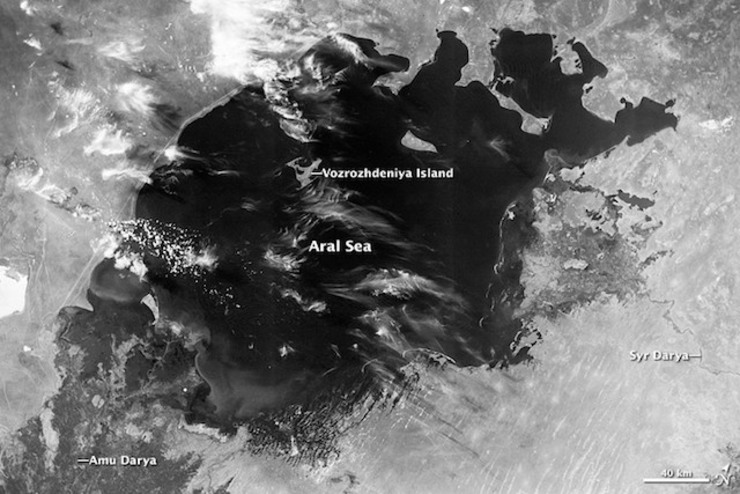 Also contributing to this environmental disaster is the lower levels of rain and snow in the watershed that feeds into the lake, Micklin added.

The communities and ecosystems that once thrived due to the lake’s riches have collapsed.

“As the lake dried up, fisheries and the communities that depended on them collapsed. The increasingly salty water became polluted with fertilizer and pesticides. The blowing dust from the exposed lakebed, contaminated with agricultural chemicals, became a public health hazard. The salty dust blew off the lakebed and settled onto fields, degrading the soil. Croplands had to be flushed with larger and larger volumes of river water. The loss of the moderating influence of such a large body of water made winters colder and summers hotter and drier.”

More than 60 million people live in the Aral Sea area, The Guardian reported.

A United Nations report released January 2014 said that some projects done by Kazakhstan to help re-divert water to parts of the sea has helped the North Aral Sea rebound somehow, but said the lake “may never return to pre-1960s levels.”

The UN Environment Programme said that to save what remains of the Aral Sea, as well as the people who live around it, trans-boundary cooperation among the surrounding countries will be key. – Rappler.com