Oct 9, 2014 7:09 AM PHT
Facebook Twitter Copy URL
Copied
A 40,000-year-old silhouette of a hand on an Indonesian cave wall is challenging the notion that Europe is the birthplace of art 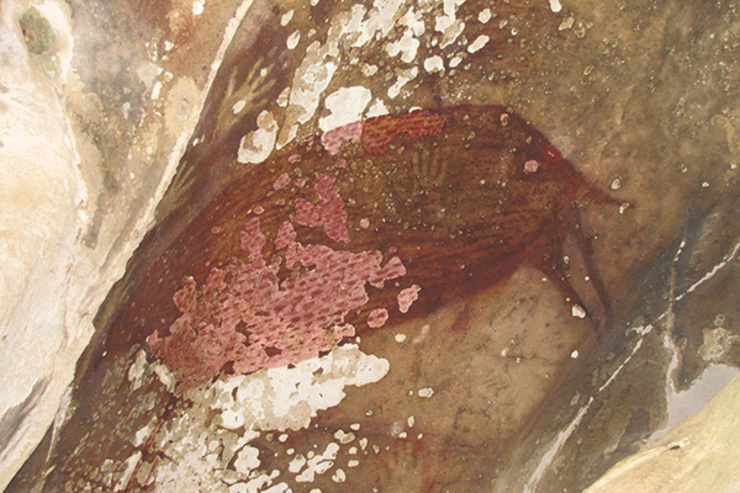 PARIS, France – The silhouette of a hand on a cave wall in Indonesia is 40,000 years old, showing that Europe was not the birthplace of art as long believed, researchers said on Wednesday, October 8.

Created by spraying reddish paint around an open hand pressed against rock, the stencil was made about the same time – and possibly before – early humans were leaving artwork on cave walls around Europe that was long thought to be the first in the world.

In the same cave on the Indonesian island of Sulawesi, a painting of a pig was dated to about 35,000 years ago, the Indonesian and Australian team reported in the journal Nature.

The discovery, they said, throws up two theories, both of which challenge the conventional wisdom around the history of human artistic expression.

Art either arose independently but simultaneously in different parts of the world – or was brought by Homo sapiens when he left Africa for a worldwide odyssey.

“Europeans can’t exclusively claim to be the first to develop an abstract mind anymore,” Anthony Dosseto of Australia’s University of Wollongong said in a statement.

“They need to share this, at least, with the early inhabitants of Indonesia.”

Anthropologists consider rock art to be an indicator of the onset of abstract thinking – the ability to reflect on ideas and events.

Dosseto and a team dated 12 hand stencils and two animal likenesses found at seven cave sites on the Indonesian island of Sulawesi.

The ancient images were discovered more than 50 years ago, but had never been accurately dated.

It had been widely assumed that anything older than 10,000 years would have eroded away in the tropical climate. 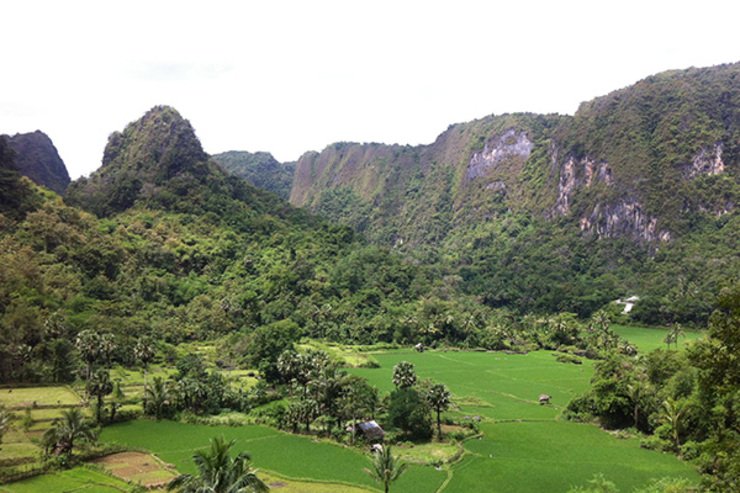 The team measured the radioactive decay of trace amounts of uranium found in small stalactite-like calcite growths called “cave popcorn” that had formed a layer less than 10 millimeters (0.38 inches) thick over the art.

The method produced minimum estimates for the works’ ages, and the pieces could in fact be much older, said the team.

The stencil is now officially the oldest known specimen of the hand silhouette art form, they reported.

And the depiction of a fat-bellied babirusa “pig deer”, its four legs, head, tail and lines of hair still clearly visible, is one of the earliest known depictions of an animal, “if not the earliest”.

“It can now be demonstrated that humans were producing rock art about 40,000 years ago at opposite ends of the Pleistocene Eurasian world,” the team wrote.

The previous oldest cave art was from El Castillo cave in northern Spain, including a hand stencil dated 37,300 years ago, according to Wil Roebroeks of Leiden University, who wrote a comment on the study.

Chris Stringer, a paleontologist at Britain’s Natural History Museum, said the new data suggested that early humans were already artists when they spread out of Africa tens of thousands of years ago.

“I think some of the art in Australia will also eventually be dated to this very early time,” he said in a video distributed by Nature.

The findings “stress the great relevance of Asia, and especially southeast Asia, for the study of human evolution,” added Roebroeks.

“Compared with Europe, Asia has seen little fieldwork, and new finds will keep on challenging what we think we know about human evolution.” – Rappler.com