2 million barrels of oil on ocean floor after BP spill

Oct 28, 2014 7:48 PM PHT
Facebook Twitter Copy URL
Copied
But BP takes issue with the method used and the latest findings on the 2010 accident on the US Gulf Coast, saying the impacted area was overestimated 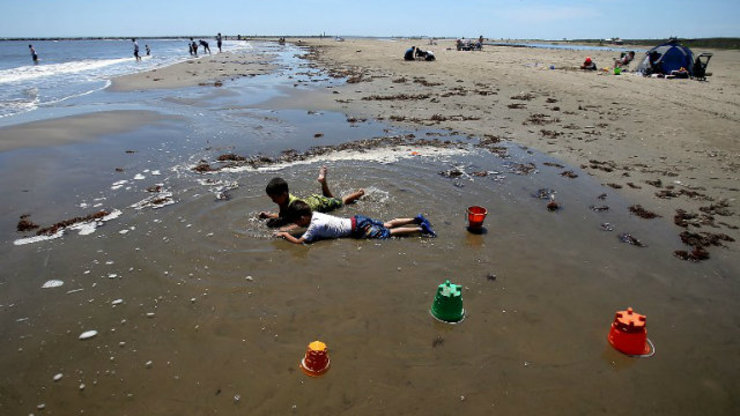 WASHINGTON, United States – Around two million barrels of oil from the BP spill off the US Gulf Coast in 2010 are believed to have settled on the ocean floor, according to a study Monday, October 27.

The fate of two million of the nearly 5 million barrels that gushed into the open waters has remained a mystery until now, said the findings in the Proceedings of the National Academy of Sciences, a peer-reviewed US journal.

Researchers analyzed samples collected at more than 500 locations around the Macondo Well, where the leaked oil emerged, and found it had spread widely, settling down like dirt in a bathtub.

The oil was found to have spread as far as 3,200 square kilometers (1,235 square miles) from the site, and may have gone even further, the report said.

Researchers came to this conclusion by studying seafloor sediment cores for residual hopane, a hydrocarbon that comes from crude oil.

BP took issue with the findings and the method researchers used, saying the impacted area was overestimated.

“The authors failed to identify the source of the oil, leading them to grossly overstate the amount of residual Macondo oil on the sea floor and the geographic area in which it is found,” said a statement from BP spokesman Jason Ryan.

“Instead of using rigorous chemical fingerprinting to identify the oil, the authors used a single compound that is also found in every natural oil seep in the Gulf of Mexico, causing them to find false positives all over the sea floor.”

According to the National Science Foundation, which funded the study, “hopane was concentrated in a thin layer at the sea floor within 25 miles of the ruptured well, clearly implicating Deepwater Horizon as the source.”

Study author David Valentine, a bio of the University of California, Santa Barbara, said the process likely led to the damage of deep sea corals.

“The pattern of contamination we observe is fully consistent with the Deepwater Horizon event but not with natural seeps – the suggested alternative.”

The National Wildlife Federation said earlier this year that scientific studies on 14 different types of creatures affected by the spill show that long lasting harm was done to dolphins, sea turtles, tuna, loons and other animals in the region.

In pleading guilty to the spill, BP agreed to pay the government $4.5 billion to settle criminal charges in the case.

It also agreed in 2012 to settle damage claims by businesses and individuals for about $7.8 billion.

Last month, a federal court judge in New Orleans concluded that BP acted with “gross negligence” ahead of the massive 2010 Gulf of Mexico oil spill, meaning BP may face billions of dollars in new fines.