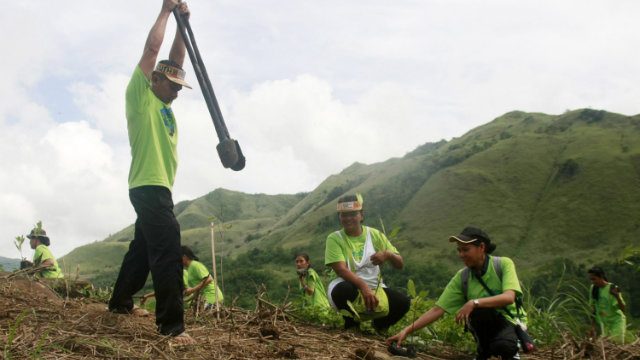 MANILA, Philippines – Amid allegations of corruption in the implementation of the country’s reforestation program, the government says it will pay a third party to make a separate audit report.

“We plan to enter into a contract with an independent third party to audit the National Greening Program,” said Environment Undersecretary for Field Operations Demetrio Ignacio during a forum on Friday, November 21.

The third party may be a non-governmental organization or private company that undertakes auditing, he said. There will be competitive bidding and the budget for the entire project is likely to go above P100 million ($2.2 million).

The job is likely to be “very labor intensive,” said Ignacio. Whoever wins the bid will have to check on more than 62,000 NGP sites all over the country. (READ: Is the gov’t reforestation program planting the right trees?)

The Department of Environment and Natural Resources (DENR) hopes the third party audit report can be released by end of 2015, said Ignacio.

The National Greening Program (NGP) is the Aquino administration’s most expensive environmental project, costing a total of P28.8 billion ($627 million) for its 6-year duration.

But through the years, it has come under fire for lack of transparency and reported cases of corruption. (READ: Rethinking the National Greening Program)

Environmental groups have reported that DENR officials and low-ranking employees are able to profit from the program, specifically when bidding out contracts for seedling production or identifying land for reforestation.

There are also alleged cases of over-reporting accomplishments and lack of proper maintenance for seedlings planted.

“It really needs to be audited because a DENR personnel has told us that they are able to pocket 20% of their regional NGP budget. People on the ground can attest to the corruption going on inside NGP,” said Elizabeth Carranza, chairperson of the Save Sierra Madre Network Alliance, one of the NGOs highly critical of the program.

Ignacio admitted there may be some truth to the allegations, but stressed that the department is doing something about it. They’ve observed, for instance, that seedlings planted in Region 3 in particular have a suspiciously low survival rate.

“We have filed some charges. But by and large, [NGP] is being implemented properly,” he said.

The need for an independent third party audit was raised by Senator Antonio Trillanes IV during the re-appointment hearing of Environment Secretary Ramon Paje last June.

He had called for an “objective” third party survey because the accomplishment reports of the department may be “self-serving data.”

All data on NGP accomplishment is gathered by the DENR’s Forest Management Bureau, the same agency implementing the NGP.

But Ignacio said that a month after NGP was launched in May 2011, Paje had already written to COA, requesting for a special audit of the NGP. He had even asked for quarterly audits and volunteered to devote DENR funding to it.

But so far, COA is only doing a regular audit. DENR continues to request for the special audit, said Ignacio. Perhaps, he surmised, COA just lacks personnel at the moment.

Despite this, the department still hopes to pursue the possibility of funding a third party audit because “it can’t just be government monitoring,” said Ignacio.

It remains unclear, however, how objectivity will be maintained given that the audit will be funded by government.

In a similar initiative for transparency in the mining sector, an independent auditor is required to consult a multi-sectoral group composed of NGOs, local government and other stakeholders while coming up with a report.

But Carranza said there is no need for a third party auditor if COA will just do its job.

“They will waste millions of pesos again for such an unnecessary endeavor. It’s a big question why COA is taking lightly the job of auditing a project with such a big budget. It’s their job.” – Rappler.com