What PH did about climate change in 2014 Facebook Twitter Copy URL
Copied
From a climate-tagged budget to the country's first climate change report, here's what the Philippines has done to curb and prepare for the world's biggest environmental crisis

MANILA, Philippines – In the year 2014, the issue of climate change heated up in the Philippines.

The year marked the anniversary of Typhoon Yolanda (international name Haiyan) which put the link between monster typhoons and global warming in the limelight.

Here is a visual guide and timeline on climate initiatives in the Philippines and around the world:

April 17, 2014 – The Department of Transportation and Communications (DOTC) announces plans to improve public transportation systems and build more walkways and sidewalks in Metro Manila and other major cities. The plan is meant to decongest traffic jams in the city, one of major causes of air pollution and emissions of greenhouse gases (GHG). April 23 – The Department of Public Works and Highways (DPWH) and architect groups begin work on drafting a Green Building Code to make structures more environment-friendly and to lessen the construction industry’s contribution to GHG emissions. 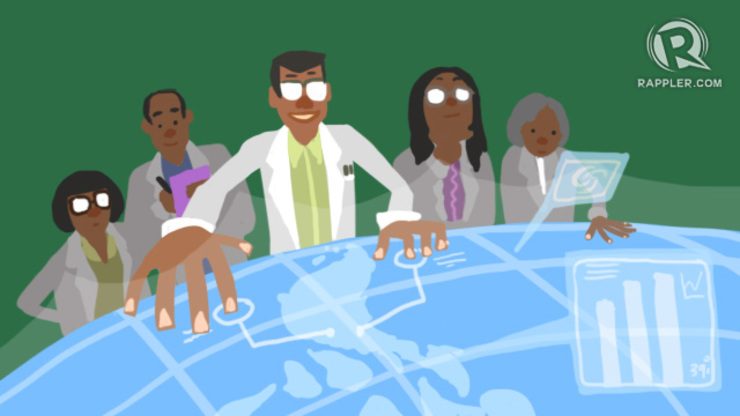 July 10 – Some of the most prominent Filipino scientists begin work on the first report assessing how vulnerable the Philippines is to climate change. Initial findings reveal disturbing impacts to communities, agriculture, food, flora and fauna. July 22 – More than 5,000 barangays receive flood hazard maps, according to the Department of Science and Technology. The maps are meant to help local leaders identify safe zones and danger zones to help achieve the goal of zero casualty during disasters. October 1 – The People’s Survival Fund for helping communities prepare for natural disasters is included in the government’s proposed 2015 budget but the fund can’t be used until Aquino signs its implementing rules and regulations. October 25 The Department of Budget and Management (DBM) and the Climate Change Commission introduce a tagging mechanism that ensures government agencies have the funds to make their programs climate-resilient. November 2 – The third and final volume of a major report on climate change is unveiled in an international climate conference in Copenhagen, Denmark. The volume is a synthesis of two other volumes published in September 2013, and March 2014. It found that if humanity continues present level of carbon emissions, there will be worsened food security, accelerated extinction of species, water shortage, migration and conflicts over resources. November 8 – PAGASA announces there is a 65% to 70% chance of El Niño developing in December. The extended period of drought and reduced rainfall could set back farmers who depend on rain to irrigate their crops, affect crop yields, and cause a water shortage in major cities. November 8 – Advocates of climate change awareness, led by Philippine climate change negotiator Naderev “Yeb” Saño, end their 40-day march from Manila to Tacloban City on November 8, the first year anniversary of Typhoon Yolanda. The “Climate Walk” aimed to raise awareness on what developing countries like the Philippines stand to lose from the impact of climate change. November 20 – The debate on whether or not to lift the ban on burning garbage in the Philippines rages in Congress. Lifting the ban, as written in the Clean Air Act, would allow local governments to put up waste incineration facilities for managing Metro Manila’s growing garbage woes. But even the most advanced burning technologies emit dangerous toxics and greenhouse gases. December 1 – Aquino signs an Executive Order tasking the Department of Environment and Natural Resources (DENR) to maintain an updated inventory on the country’s GHG emissions. December 3 – The Philippines tops a list of countries who suffered the most from 2013 in a list in the Global Climate Risk Index 2015. December 6 – The strongest typhoon of 2014, dubbed a super typhoon by the US weather agency, hits Eastern Visayas and parts of Luzon, leaving at least 18 dead and more than P3 billion (US$67.1 million*) in damage. This is the second time a super typhoon coincides with the UN climate talks. Last year’s conference began as Super Typhoon Yolanda made landfall.

December 10 – The House of Representatives approves emergency powers for President Aquino to address the predicted 2015 power crisis. But the decision suspends major climate change-related laws like the Clean Air Act and the Biofuels Act to fast-track the construction of power plants. December 14 – The Peru climate talks end with deadlocks on controversial issues like determining national pledges to cut carbon emissions and a compensation mechanism for poor countries without the means to recover from climate change impacts, including devastating typhoons. The Philippine delegation changes tactics in its contribution to the talks. – Rappler.com