Feb 13, 2015 3:15 AM PHT
KD Suarez
Facebook Twitter Copy URL
Copied
A study estimates millions of tons of plastic waste get dumped into our oceans annually, with middle-income nations – including the Philippines – among the top contributors 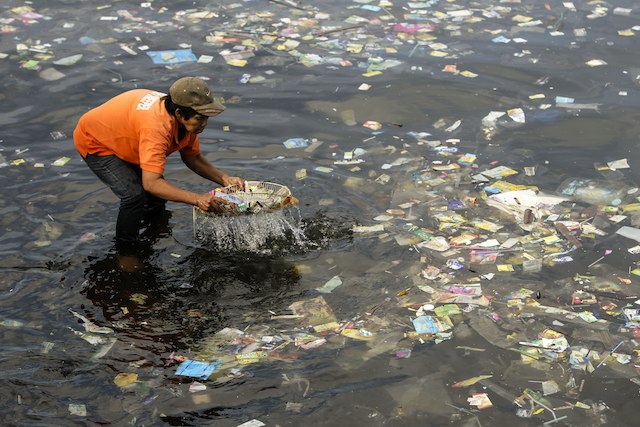 MANILA, Philippines – In a landmark study, scientists have estimated that millions of tons of plastic waste go into the sea worldwide every year, with middle-income nations – including the Philippines – shown to be among the top contributors.

Researchers led by Jenna Jambeck of the University of Georgia calculated that out of the 275 million metric tons (MMT) of plastic waste coastal countries have produced in 2010, between 4.8 and 12.7 MMT entered the ocean.

It would be equivalent to “finding 5 grocery bags full of plastic on every foot of coastline” around the world, Jambeck said.

The figures were calculated by analyzing waste sources and the amount of garbage churned out by people living within 50 kilometers from the coasts of 192 countries bordering the sea, and then factoring in population density and economic status.

The researchers estimated that as of 2010, the Philippines produced a total of 1.88 MMT/year. 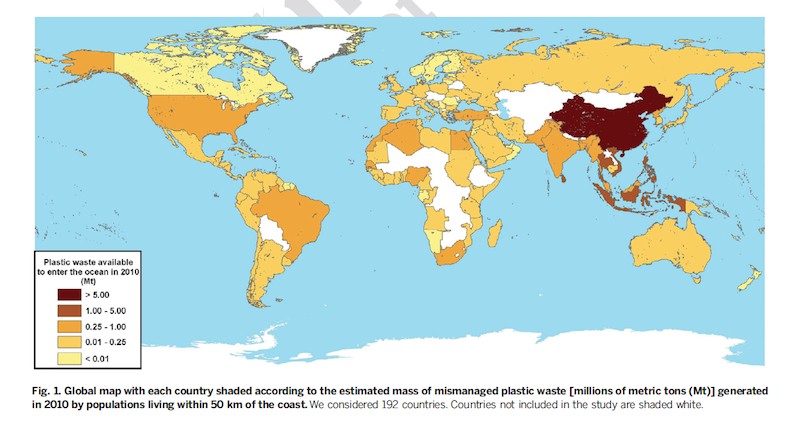 The countries covered by the study all border the Atlantic, Pacific, and Indian Oceans, and the Mediterranean and Black Seas. They also house 93% of the world’s population.

Researchers also found that despite the millions of tons of plastics dumped into the sea, only between 6,350 to 245,000 metric tons (MT) are found on the ocean surface – the rest are floating in deeper waters or sitting at the bottom of the sea, endangering marine life.

“This work gives us a sense of just how much [plastic waste] we’re missing,” said Kara Lavender Law, a co-author of the study.

If the trends the researchers saw in their study hold up in the next few years, we can expect mismanaged waste to increase further.

“Assuming no waste management infrastructure improvements, the cumulative quantity of plastic waste available to enter the marine environment from land is predicted to increase by an order of magnitude by 2025,” the paper said.

Jambeck said that by that year, we could see around 155 MMT of plastics going into the ocean.

Researchers also have a dire warning: the planet will not reach global “peak waste” before 2100. According to the paper, “our waste will continue to grow with increased population and increased per capita consumption associated with economic growth, especially in urban areas and developing African countries.”

“The numbers are staggering, but as the group points out, the problem is not insurmountable,” said Frank Davis, director of the National Center for Ecological Analysis and Synthesis (NCEAS) of the University of California, Santa Barbara.

If countries, especially the top 20 contributors, reduced their plastic garbage by around 50% in the next few years, “the mass of mismanaged plastic waste would decrease 41% by 2025.”

This is the first major research that has estimated the amount and origins of plastic wastes entering the marine environment.

Published in the February 13 edition of the journal Science, the study was led by NCEAS. – Rappler.com