Apr 25, 2015 3:00 PM PHT
Agence France-Presse
Facebook Twitter Copy URL
Copied
The only nature park in Manila, the La Mesa watershed, a thicket about a fifth the size of Paris, wraps around a dam that stores drinking water for the metropolis of 14 million people 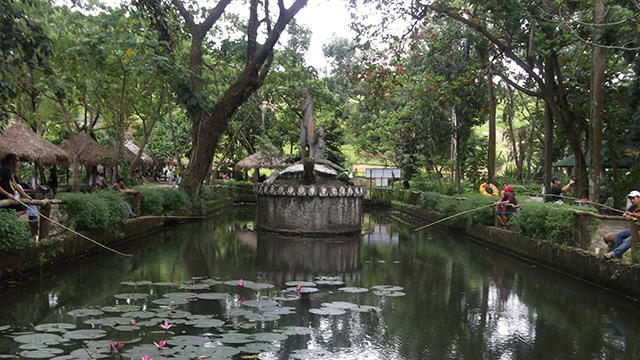 MANILA, Philippines – A tropical rainforest has regrown against all odds on the edge of the Philippine capital’s biggest open-air dump, and is now a patch of green paradise in a sprawling metropolis blighted by giant slums.

The only nature park in Manila, the La Mesa watershed, a thicket about a fifth the size of Paris, wraps around a dam that stores drinking water for the metropolis of 14 million people.

“It’s as if you’ve left Manila,” Anton Haltland, manager of a car dealership, told Agence France-Presse after he and his friends spent half a day riding mountain bikes under thick canopies and knee-deep river crossings.

“As if you’ve slipped into a different time zone of a bygone era….It ticks all the boxes for challenge and beauty.”

About 300,000 people visit the watershed and its more than 50 kilometers (30 miles) of nature trails each year, according to park officials.

The tropical rainforest within a city is the product of a 15-year partnership involving the national government, water companies, and environmental groups.

Before then, the forest surrounding the reservoir had been largely burnt off, replaced with a patchwork of farms and shanties that had been expanding in parallel with the nation’s fast-growing population.

“Most of these informal settlers depended on the watershed’s resources to make a living, so they cut trees for lumber, charcoal, or firewood. The cleared areas were turned into vegetable plots,” project manager Dave Azurin told AFP.

To understand what would have happened to the area if not for the conservation efforts requires simply looking from a ridge across to the massive slums that border the watershed and are home to about 350,000 people.

One of the city’s biggest open-air dump sites is also next to it.

But since the re-greening efforts started, more than 750,000 trees have been planted and are now home to 125 bird species, according to Azurin.

He said 99 of the tree species were endemic to the Philippines, and many of them were endangered.

More than 7,000 illegal settlers who were living in the watershed were also gradually relocated to nearby areas, thanks to free housing provided by the state water utility, the Metropolitan Waterworks and Sewerage System.

Nevertheless, the program has not been a complete success, nor without its dangers.

Unknown to many visitors, the park remains besieged by intruders who cut and steal trees, and at times even build shanties inside.

The park’s first line of defense is a perimeter wall about the height of two adults, but trespassers easily use crowbars and hammers to make holes, according to forest ranger Exequiel Lobres.

“We’d plug a hole today and they’d be back to punch another one through when no one is looking,” Lobres said.

“It’s a dangerous job. We’re always fighting fires set off by outsiders. Some of them are armed.”

In the most infamous incident, armed settlers raided the rangers’ bunkhouse in 2002 and beheaded its caretaker.

The assailants also set fire to the building and several watchtowers along the watershed, according to Azurin, who was among a group of rangers and project officials threatened at gunpoint during the raid.

He said 4 suspects were later arrested, tried and convicted of the murder, while another remained at large.

Three to 5 people are still charged in court each year for cutting and stealing trees or burning the forest, while many more minor violators are sent away on a reprimand, according to Azurin.

The park has 59 forest rangers, but they are armed only with machetes and chemical sprays with which to fight fires.

However he said the problem of interference by people in neighboring areas was starting to improve.

“We believe the worst is behind us. These incidents are on a downtrend,” he said, crediting an educational campaign in the surrounding communities as key to preventing further violence.

Nevertheless, Azurin said informal settlers still remained on about 225 hectares, just over 10% of the forest, in an ownership dispute with the state water utility, he added.

The case has been tied up in the courts for years, holding up the reforestation effort.

And the watershed’s future is by no means secure, according to Gina Lopez, the head of the reforestation program.

She said the program is due to end next year and the national government had yet to decide whether to extend the partnership with the green groups and various state agencies involved.

She warned that, without proper funding to guard the watershed, trespassers would easily come in and cut down the trees, which would become increasingly valuable as they matured.

“In a few years’ time this forest is going to be worth zillions of pesos (dollars),” Lopez said. – Cecil Morella, AFP/Rappler.com