Aquino a ‘total let down’ in Canada – green groups 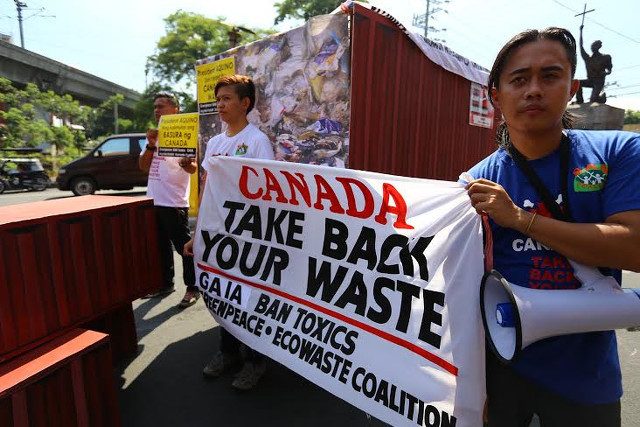 “What a total let down! The people’s plea for Mr Aquino to stand up for our sovereign right not to be treated as a dumping ground fell on deaf ears with the President himself giving the thumbs up for Canada’s unlawful garbage exports to be incinerated,” said Aileen Lucero, coordinator of green group EcoWaste Coalition.

Her statement comes after Aquino’s state visit to Canada last May 7 to 9, where he failed to bring up the issue of illegally exported trash from Canada that has been stranded in Manila and Subic ports since 2013.

Activists thought the state visit was the perfect opportunity to remind Canadian Prime Minister Stephen Harper of the garbage, which by international law, should be returned to Canada.

Instead, Aquino’s visit focused on economic matters and stronger bilateral ties with Canada. The President said in a news briefing in Canada that he did not bring up the issue to Harper as it has been addressed by Philippine agencies, while the private companies involved are facing criminal charges.

To this, Lucero said, “Is this how spineless our leaders have become that they can easily forget about our national dignity and well-being and succumb to Canada’s pressure in exchange for more investments?”

Instead of insisting that Canada take back its trash, Aquino told reporters during the state visit that the Philippines is ready to dispose the garbage at home – the track preferred by Canada.

Two options are yet to be approved by a Regional Trial Court in Manila: disposal through “cement kiln co-processing” or direct disposal in a landfill.

Fifty container vans – all suspected of containing garbage – were illegally imported from Canada and have been stranded in Manila and Subic ports since 2013.

The 18 that were opened – at the expense of the Philippine government – contained non-recyclable plastics, household waste, and used adult diapers.

Some container vans are leaking, posing health threats to port workers and nearby communities. The space occupied by the container vans in the ports has also incurred hundreds of thousands of pesos in losses for the Philippine government.

The Bureau of Customs (BOC) has filed a case against the Philippine-based exporter. The Canadian government, however, has said it does not have laws to compel the Canadian exporting company to return the container vans to Canada.

Leading up to Aquino’s Canada state visit, activists took to the streets and launched an online campaign to convince both Aquino and Harper that the garbage must be returned to Canada for disposal.

An online petition has garnered more than 25,000 signatures. Canadians joined the call, asking Harper not to leave a “stinking legacy.”

Cement kiln co-processing, one of the options now being considered by the Regional Trial Court, is approved by the Basel Convention under certain standards.

The Basel Convention Controlling Transboundary Movements of Hazardous Wastes and their Disposal is an agreement between countries to regulate the transport of dangerous garbage.

According to the Convention, cement kiln co-processing is an “environmentally sound recovery option for many waste materials.”

“Properly controlled” co-processing, it said, is a preferred alternative to landfill and incineration.

Environmentalists, however, still regard cement kiln co-processing as a form of incineration.

In this method, the waste is exposed to temperatures of up to 2,000 °C. The high temperature supposedly destroys the organic component of waste, leaving no residue.

Both options to dispose of the garbage in the Philippines are “unacceptable,” said Paeng Lopez, a campaigner for Global Alliance for Incinerator Alternatives (GAIA).

They are also allegedly difficult to regulate, especially without the proper monitoring equipment.

“No community deserves the kind of toxic emissions it will be exposed to once these wastes are burned in cement kilns that are not subjected to statutory emissions standards that waste incinerators all over the world keep failing,” said Lopez.

Allowing Canada’s garbage to be disposed of in this way is insulting to national dignity, he added.

“The message we get from P-Noy is clear: we are subservient to Canada so much so that we are willing to do it at the expense of our own health,” he said.

Though cement kiln co-processing is approved by the Basel Convention, the Canada garbage flouts a more basic Basel Convention rule: the garbage should not have been in the Philippines in the first place.

Following the Convention, the garbage should have been taken back by Canada 30 days after being notified of its presence in the Philippines.

Both the Philippines and Canada have ratified the Basel Convention. – Rappler.com