MANILA, Philippines – Boracay Island’s beaches may seem like a thriving party hub on the surface, but under its waters, things are not as cheerful.

A study conducted by Filipino and Japanese tourists showed that the tourism boom in the famous island may have led to a 70.5% decline in coral cover over a period of 23 years, from 1988 to 2011. (READ:Boracay: Paradise lost?)

The study, called the Coastal Ecosystem Conservation and Adaptive Management (CECAM), was funded by the Japanese International Cooperation Agency (JICA) and was conducted from 2010 to 2015.

Scientists analyzed satellite images of Boracay’s coral cover covering the 23-year period. They found out that the highest decrease in coral cover was observed from 2008 to 2011, when tourist arrivals in the island rose by 38.4%.

The culprit is unmonitored snorkeling and diving activities, which have led to damaged coral reefs.

Too dirty for swimming

The study also found that water quality in some parts of the island has deteriorated drastically.

University of the Philippines (UP) scientist Miguel Fortes said that the water in the eastern part of Boracay beach is so polluted that it is now unsafe for swimming and other human activities.

The water pollution is largely due to untreated waste water allowed to directly flow into Boracay waters. The dirty water results in green algal blooms, now a common site in Boracay, and the degradation of coral reefs.

Boracay’s filthy waters have prompted the Department of Environment and Natural Resources (DENR) to crack down on resorts and other commercial establishments that do not have proper drainage systems.

The DENR also found areas around the island that are too dirty to swim in.

Water samples near a beach in Sitio Bulabog contained 47,460 most probable number (mpn) of coliform per 100 milliliter of water – almost 50 times the level safe for swimming. 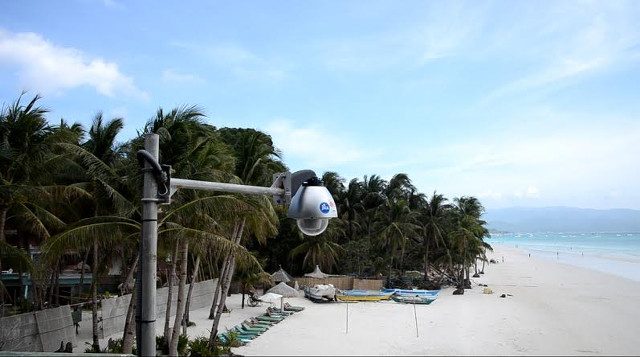 Yet another threat to Boracay is beach erosion. Five closed circuit television (CCTV) cameras installed by JICA along the beach allowed scientists to observe the shrinking of the beach area and sand erosion that are found to occur during the summer season.

The situation is ironic given Boracay rose to prominence because of its 4-kilometer beach of flour-fine sand.

Dying corals and thinning beaches are expected to make a big impact on Boracay as a prime tourist destination.

“Tourism is an important economic driver in the Philippines. By protecting marine resources, we are also helping sustain the tourism industry, and jobs creation in the country,” said JICA senior representative Takahiro Morita.

The findings pose a long-standing challenge to local government, environment, and tourism officials: how to balance economic development with environmental protection.

“It’s very crucial that the sustainability of Boracay’s environment will not be exchanged for short-term economic gains. We hope to continue working with planners and policy-makers in the island through knowledge and technology sharing that will help conserve the coastal environment,” said UP scientist Ariel Blanco.

But with its present condition, there’s no saying if it will stay at the top for long. – Rappler.com