Jun 18, 2015 12:18 PM PHT
Agence France-Presse
Facebook Twitter Copy URL
Copied
(UPDATED) In a radically worded letter addressed to every person on the planet, the leader of the world's 1.2 billion Catholics blames human greed for the critical situation 'Our Sister, mother Earth' now finds itself in 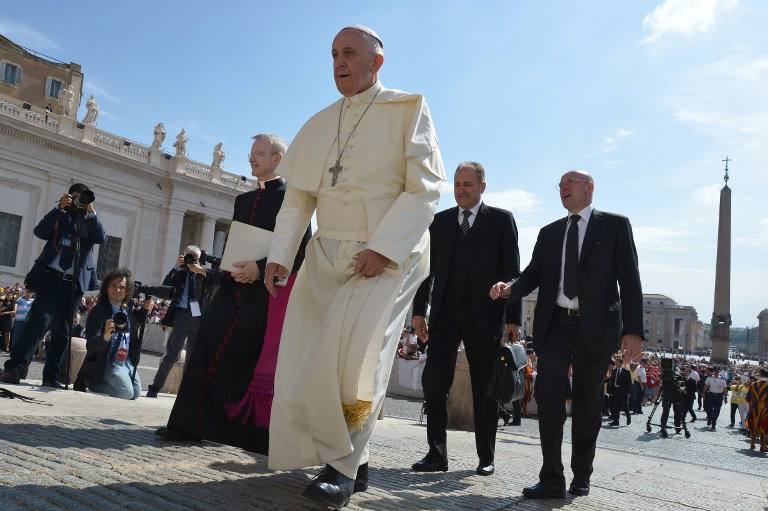 VATICAN CITY (2nd UPDATE) – Pope Francis on Thursday, June 18, urged the world to act quickly to prevent “extraordinary” climate change from destroying the planet and said wealthy countries must bear responsibility for creating the problem and for solving it.

In a radically worded letter addressed to every person on the planet, the leader of the world’s 1.2 billion Catholics blames human greed for the critical situation “Our Sister, mother Earth” now finds itself in.

“This sister now cries out to us because of the harm we have inflicted on her by our irresponsible use and abuse of the goods with which God has endowed her,” he writes in his long-anticipated Encyclical on the environment.

Arguing that environmental damage is intimately linked to global inequality, he goes on to say that doomsday predictions can no longer be dismissed and that: “The earth, our home, is beginning to look more and more like an immense pile of filth.”

Green activists hailed the charismatic Argentinian pontiff’s widely-trailed intervention as a potential game-changer in the debate over what causes global warming and how to reverse it.

“Everyone, whether religious or secular, can and must respond to this clarion call for bold urgent action,”said Kumi Naido, the International Executive Director of Greenpeace.

Environmentalists hope the pope’s message will significantly increase the pressure for binding restrictions on carbon emissions to be agreed at global talks in Paris at the end of this year. (READ: Q & A: Pope’s green thesis: a global game-changer?)

But even before the official publication, climate change skeptics had dismissed the document’s argument that the phenomenon is primarily man-made and that humanity can reverse it through lifestyle changes including an early phasing-out of fossil fuels.

“I don’t get economic policy from my bishops or my cardinal or my pope,” US presidential candidate Jeb Bush said on the eve of the release in comments that underlined the depth of opposition in the United States to a binding agreement to curb greenhouse gases.

The Encyclical references the arguments of the skeptics by acknowledging that volcanic activity, variation in the earth’s movements and the solar cycle are factors in climate change.

But it maintains that “most global warming in recent decades is due to the great concentration of greenhouse gases released mainly as a result of human activity”.

And it leaves no doubt that Francis believes the world is on a fast-track to disaster after decades of inaction. (READ: FAQs: What’s an encyclical?)

“If present trends continue, this century may well witness extraordinary climate change and an unprecedented destruction of ecosystems, with serious consequences for all of us,” he writes.

Bemoaning the “remarkable” weakness of political responses to this, Francis accuses the skeptics of cynically ignoring or manipulating the scientific evidence.

“There are too many special interests, and economic interests easily end up trumping the common good and manipulating information so that their own plans will not be affected,” he writes.

“We know how unsustainable is the behavior of those who constantly consume and destroy, while others are not yet able to live in a way worthy of their human dignity,” he adds, saying the time has come for parts of the world to accept decreased growth.

The consequences of climate change, he argues, will include a rise in sea levels that will directly threaten the quarter of the world’s population that lives near or on coastlines, and will be felt most acutely by developing countries.

Highlighting warnings that acute water shortages could arise within decades, he writes that, “the control of water by large multinational business may become a major source of conflict in this century”.

He adds: “It is foreseeable that, once certain resources have been depleted, the scene will be set for new wars,” with the ever-present risk that nuclear or biological weapons could be used.

One of the strongest themes in the encyclical is that rich countries must accept responsibility for having caused climate change and should “help pay this debt” by cutting their carbon emissions and helping the developing world adopt sustainable forms of energy generation.

“The land of the southern poor is rich and mostly unpolluted, yet access to ownership of goods and resources for meeting vital needs is inhibited by a system of commercial relations and ownership which is structurally perverse,” the pope writes in perhaps the most radical passage of the document.

Developing countries will need financial help to do this from “countries which have experienced great growth at the cost of the ongoing pollution of the planet” and this pact has to be enshrined in binding accords. – Angus Mackinnon, AFP / Rappler.com