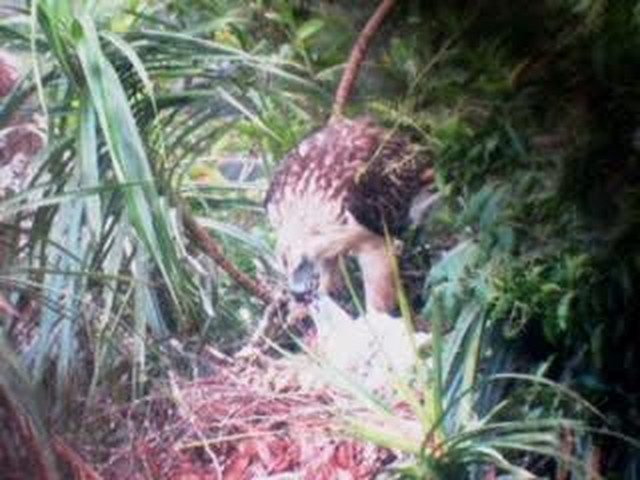 The landmark finding, which proves the Cordilleras is a habitat of the Philippine national bird, was announced by PEF biologist and project coordinator Tatiana Abaño in Luna town, Apayao province during Cordillera Day celebrations on Tuesday, July 14.

The active nest, which contained a one-month old chick, was discovered by a PEF team last April. Since then, the team has been returning to the nest site to monitor the development of the chick, now a 3-month old eaglet.

The Apayao local government is proud of being one of the homes of the majestic bird, dubbed the “king of Philippine birds” or “Haribon.”

“It’s only now we are informed of our rich biodiversity. We are so blessed these creations are in Apayao,” said Apayao Vice Governor Hector Pascua.

The Philippine eagle is known to live in only 4 parts of the country: Mindanao region, Samar, Leyte, and Luzon. However, previous studies claimed Western Luzon, including the Cordillera region, was not suitable for Philippine eagles, said Abaño.

Conservationists are in a rush to preserve the rare birds. Classified as critically-endangered by the International Union for the Conservation of Nature, there are only 400 pairs left in the wild.

Recent years have yielded more findings of the bird, giving hope to conservationists that its population is increasing.

“New information generated from observing the newly discovered nest will definitely bring eagle conservation in Luzon to the next level,” said Theresa Mundita Lim, director of the Biodiversity Management Bureau of the Department of Environment and Natural Resources (DENR).

The PEF began its search for Philippine eagles in Apayao in 2011 after it received reports of sightings from the DENR.

Since then, the team conducted searches, surveys and information and education campaigns in the province. In several instances, the PEF team spotted Philippine eagles. But it was not until 2013 that they discovered an inactive nest.

The search culminated in the discovery of the active nest in April.

Regular observations of PEF report the eaglet in the nest as healthy and growing.

Abaño said the eaglet can usually be found perching or focusing in its nest “like a curious baby.”

It also spends its time preening, or fixing his feathers. At times when his parents have not brought him any food, he in sleeping or sunbathing – spreading his wings to dry out his body after rains.

Soon, the eaglet will become another majestic adult the country can be proud of. It has begun vocalizing, object-playing and practice-flapping in preparation for its turn to become a full-fledged bird of prey.

The eaglet’s favorite food, said Abaño, are mammals and reptiles. The team has photos of prey delivered to the young eagle by its parents.

Scientists credit a local conservation ordinance for the protection of the Philippine eagle’s habitat in Apayao. Such a rare predator would not be present in the area if its forests were not intact.

Dutch biologist Merlijn Van Weerd of the Mabuwaya Foundation, who has been recording rare species in the Apayao mountain ranges since 2011, says Apayao towns are able to restrict destructive activities inside the forests.

The Apayao mountain forests are not protected on the national level, unlike more famous ecosystems like the Tubbataha Reefs Natural Park and Mount Apo.

But with proof that the area is a habitat of the Philippine eagle, the province will have good reason to push for national protection, which could mean bigger conservation funds. – Rappler.com