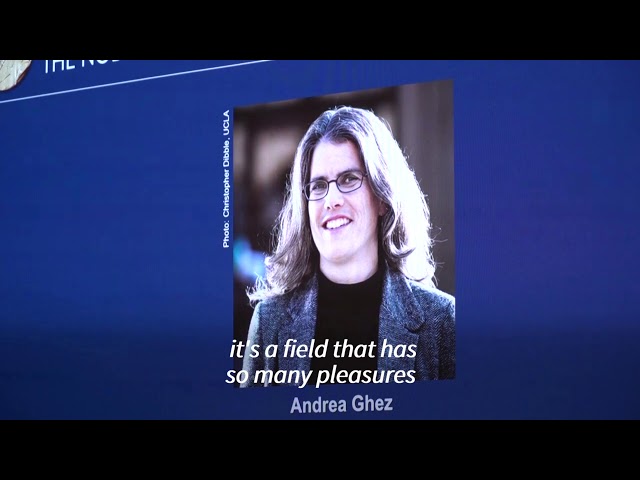 Facebook Twitter Copy URL
Copied
(3RD UPDATE) Roger Penrose, Reinhard Genzel, and Andrea Ghez are selected 'for their discoveries about one of the most exotic phenomena in the universe, the black hole'

A trio of scientists, Roger Penrose of Britain, Reinhard Genzel of Germany and Andrea Ghez of the US, won the Nobel Physics Prize on Tuesday, October 6, for their research into what the Nobel committee called “one of the most exotic phenomena in the universe, the black hole.”

Penrose, 89, was honored for showing “that the general theory of relativity leads to the formation of black holes,” while Genzel, 68, and Ghez, 55, were jointly awarded for discovering “that an invisible and extremely heavy object governs the orbits of stars at the center of our galaxy,” the jury said.

Ghez is just the fourth woman to receive the physics prize since 1901 when the first Nobel prizes were handed out.

“I feel delighted to be recognized in that way because I think having visible role models can make a huge impact on young women thinking about becoming scientists,” Ghez, who is a professor of physics and astronomy at the University of California, told Agence France-Presse (AFP).

The term “black hole” refers to a point in space where matter is so compressed as to create a gravity field from which even light cannot escape.

Center of our galaxy

For years physicists questioned whether black holes could really exist but Penrose, a professor at the University of Oxford, used mathematical modeling to prove back in 1965 that black holes can form.

His calculations proved that black holes – super dense objects formed when a heavy star collapses under the weight of its own gravity – are a direct consequence of Einstein’s general theory of relativity.

The Royal Swedish Academy of Sciences, which crown the Nobel Prize winners in physics, chemistry and economics, said Penrose’s 1965 article “is still regarded as the most important contribution to the general theory of relativity since Einstein.”

Penrose also worked closely with famed physicist Stephen Hawking, who died in 2018 after a long neurodegenerative illness, and some experts lamented that he was no longer around to share the credit.

In an online briefing with reporters Penrose said a Nobel nod to Hawking would have been “well-deserved” but speculated that it was possibly held back by the Nobel committee’s mandate to honor observable, rather than theoretical, science.

As for himself receiving the award, he said he “wasn’t expecting it at all.”

Since the early 1990s, decades after Penrose published his theories, Genzel and Ghez have led research focusing on a region called Sagittarius A* at the center of the Milky Way.

Using the world’s largest telescopes, they discovered an extremely heavy, invisible object – around 4 million times greater than the mass of our Sun – that pulls on surrounding stars, giving our galaxy its characteristic swirl.

The pair in particular developed methods to see through the huge clouds of interstellar gas and dust to the center of the Milky Way, creating new techniques to compensate for the image distortion caused by Earth’s atmosphere.

In April 2019, astronomers unveiled the first photo of a black hole.

Martin Ward, a professor of astronomy at Durham University, called the work of the trio “a great example of theoretical insight and prediction followed by state-of-the-art observational evidence.”

Genzel himself said that hearing the news had brought “a few tears” to his eyes.

Speaking at a press conference from the Max Planck Institute for Extraterrestrial Physics in Garching, Germany where he is a director, Genzel also said he had not expected to be honored at this stage, noting that “one of the qualities a researcher needs to win a Nobel Prize is to live a long life.”

While the existence of black holes is no longer in doubt, the Nobel Committee chair David Haviland noted that they “still pose many questions that beg for answers and motivate further research.”

The sentiment was echoed when Ghez was asked if she understood what is happening inside a black hole.

“We have no idea what’s inside a black hole and that’s what makes these things such exotic objects,” Ghez told reporters in Stockholm via a telephone link.

Penrose said that understanding the singularities at the heart of the holes was the “greatest puzzle” facing astrophysics today.

American astronomer Shep Doeleman, director of the Event Horizon Telescope project which produced the 2019 image, called the research “transformative” and told AFP that in the coming decade the first black hole movies were coming.

“It is a golden age of black hole research with wonders yet to come,” he said.

The trio will share the Nobel prize sum of 10 million Swedish kronor (about $1.1 million, 950,000 euros), with half going to Penrose and the other half jointly to Genzel and Ghez.

They would normally receive their prize from King Carl XVI Gustaf at a formal ceremony in Stockholm on December 10, the anniversary of the 1896 death of scientist Alfred Nobel who created the prizes in his last will and testament.

But the in-person ceremony has been canceled this year due to the coronavirus pandemic, replaced with a televised ceremony showing the laureates receiving their awards in their home countries. – Rappler.com