Apr 22, 2016 1:30 PM PHT
Agence France-Presse
Facebook Twitter Copy URL
Copied
Setting off on a Russian Soyuz rocket will be Sentinel-1B with its Earth surveillance radar, and Microscope, a French-built orbiter seeking to poke a hole in Einstein's theory of general relativity 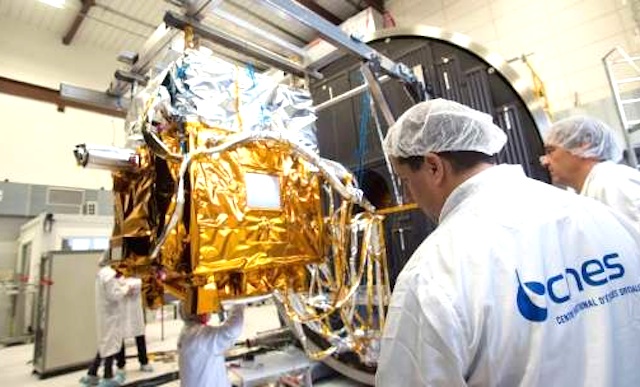 PARIS, France – Europe is set to launch two satellites on Friday, April 22 with very important missions: one will track environmental damage to Earth, while the other will test a mainstay of physics theory.

Setting off on a Russian Soyuz rocket will be Sentinel-1B with its Earth surveillance radar, and Microscope, a French-built orbiter seeking to poke a hole in Einstein’s theory of general relativity.

They will be hoisted from Europe’s launch pad in Kourou, French Guiana, at 2102 GMT Friday.

Sentinel-1B is the twin of Sentinel-1A, launched two years ago.

The pair are equipped with sophisticated, cloud-penetrating radar with which to monitor Earth’s surface by day and night, regardless of the weather conditions.

Their mission is to track climate and environmental change and assist in disaster relief operations.

Sentinel-1A and 1B are part of the 3.8-billion-euro ($4.3-billion) Copernicus project, which will ultimately sport six orbiters in all. It is a joint undertaking of the European Space Agency and the European Commission.

Between them, the twin satellites will be able to take a picture of anywhere on Earth every six days from an altitude of nearly 700 kilometers (435 miles).

The images can be used to spot icebergs and oil spills, illegal logging or landslides.

They will help scientists monitor changes in forest cover, water and crop health.

And their mapping of areas stricken by flood or earthquake will help emergency teams target the worst-hit areas and locate passable roads, railway lines and bridges.

Also on board the Soyuz will be Microscope, designed to test a key component in the theory of general relativity published by Albert Einstein 100 years ago. (READ: Space probe set to test Einstein’s relativity theory)

The 130-million-euro satellite will probe – with 100 times more accuracy than has been possible on Earth – the so-called “equivalence principle,” which says that a feather in a vacuum should fall at the same speed as a lead ball.

The experiment will compare the motion of two different objects “in almost perfect and permanent free fall” aboard the orbiting satellite, according to France’s CNES space agency, which financed 90% of the project.

If any difference in motion is observed, the equivalence principle would collapse – “an event that would shake the foundations of physics,” it states on its website.

Such a result would suggest that Einstein’s relativity theory may be flawed. This would be a great relief to physicists who have long struggled to explain why the theory cannot be reconciled with quantum physics, the other pillar of modern physics.

“We shall then know that Einstein’s theory of general relativity is not the whole story of gravity – that there are other forces contributing to it,” French physicist Thibault Damour told reporters in Paris last week.

“It will not mean that Einstein’s theory is completely wrong – just incomplete,” he added.