How the ‘greenhouse effect’ works 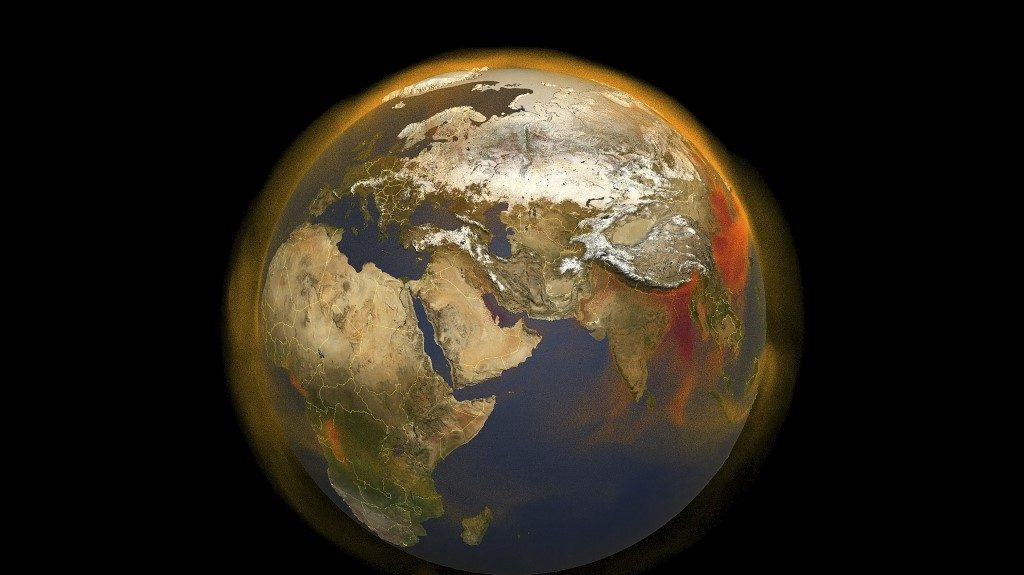 This NASA illustration image obtained March 25, 2020 shows NASAs new three-dimensional portrait of methane, the worlds second-largest contributor to greenhouse warming, as it arises from a diversity of sources on the ground and how it moves through the atmosphere. - Combining multiple data sets from emissions inventories, including fossil fuel, agricultural, biomass burning and biofuels, and simulations of wetland sources into a high-resolution computer model, researchers now have an additional tool for understanding this complex gas and its role in Earths carbon cycle, atmospheric composition, and climate system. (Photo by Handout / NASA / AFP) / RESTRICTED TO EDITORIAL USE - MANDATORY CREDIT "AFP PHOTO /NASA/SCIENTIFIC VISUALIZATION STUDIO/HANDOUT " - NO MARKETING - NO ADVERTISING CAMPAIGNS - DISTRIBUTED AS A SERVICE TO CLIENTS

Facebook Twitter Copy URL
Copied
The problem is not the Greenhouse Effect; it’s that we are upsetting it by adding huge amounts of carbon dioxide and other industrial gases to the air.

The following is the 39th in a series of excerpts from Kelvin Rodolfo’s ongoing book project “Tilting at the Monster of Morong: Forays Against the Bataan Nuclear Power Plant and Global Nuclear Energy.“

All the worry about climate change might make you think the Greenhouse Effect is bad. But the planet keeps itself warm enough for life with this energetic, actively balanced atmospheric system.

The problem is not the Greenhouse Effect; it’s that we are upsetting it by adding huge amounts of carbon dioxide and other industrial gases to the air.

Remember: the hotter a heavenly body is, the more abundant, shorter, and more energetic the electromagnetic waves it emits. Compare the sunlight that heats the Earth, most abundant in the visible range, to the infrared radiation our much cooler planet emits back to outer space.

Only some of the infrared emitted by Earth’s heated surface, the central, darker portion in this picture, escapes and is detected by satellites. The rest, absorbed by greenhouse gases, keeps our planet warmer than it would be otherwise.

The term “Greenhouse Effect” is not a good analogy, but we are stuck with it.  A greenhouse is warm not just because short-wave sunlight can enter it and long-wave infrared cannot leave, but because its heated air will kill the plants if it cannot escape. Greenhouses need windows!  Similarly, Earth would keep getting hotter unless atmospheric energy trapped by greenhouse gases eventually escapes.  It does so in the form of infrared energy with wavelengths that greenhouse gases do not absorb.

It’s one of those simple words that we all are familiar with but may have difficulty defining.  Heat is the energy of molecular motion.  Think of a pot of water warming on a hot stove, its molecules moving faster and faster.  Eventually, they have so much energy that the water boils; they break away, go into the air as independent molecules of water vapor. If the air cools, the vapor molecules will slow down enough to get together into droplets of rain.

Infrared rays can be transformed into heat, and that heat can be transformed back into infrared rays. That is at the core of the “greenhouse effect.” The Sun-heated Earth surface radiates infrared energy, some of which the greenhouse gases soak up and put to work before letting it escape. That detained energy is what keeps our planet habitably warm.

By far the most common atmospheric gases are Nitrogen, 78%, and Oxygen, 21%. Their molecules are pairs, N2 and O2, each pair hugging together by sharing electrons.  They are not greenhouse gases because their electrons are symmetrically distributed.  If a molecule absorbs heat, its paired atoms can only move a little away from each other before their shared electrons pull them back together again. That doesn’t disturb their symmetry.

Most of the remaining 1% is single atoms of inert Argon. That leaves only 0.1% to act as greenhouse gases – together with water vapor that varies in the atmosphere up to 2%, depending on air temperature.

We owe so much to that tiny minority of greenhouse gases that warm the atmosphere, oceans, land, and us by capturing and sharing Earth’s infrared radiation. What makes them so special?

Each greenhouse-gas molecule is made of three or more atoms, so they are geometrically and electronically complicated.  Specific infrared wavelengths make them vibrate, rhythmically distort themselves in specific ways, like dancers responding with definite moves in rhythm with favorite songs.

Water vapor and carbon dioxide are by far the most important greenhouse gases, the only ones we need to understand the Greenhouse Effect.  We will meet others later.

Their bending modes are their most important, but here are all their vibration modes:

Were it not for the Greenhouse Effect, the amount of incoming solar energy would simply heat Earth’s surface and make it radiate out an equivalent amount of infrared energy. That would keep Earth’s temperature a frigid -20°C!

But on their way toward outer space, many of Earth’s infrared rays are intercepted and absorbed by greenhouse molecules, making them vibrate, vigorously and frequently bang into each other and all the other air molecules, heating them. They also stop vibrating by releasing infrared rays; some of that energy returns to Earth’s surface and back up again.

In the end, though, like a lake that doesn’t overflow because river water drains out of it as fast as it comes in, as much energy must leave Earth as comes in from the Sun, or it would overheat. The greenhouse activity is outgoing energy that the global atmosphere borrows, diverts and releases, to help keep Earth warm.

Water vapor is the most important greenhouse gas!

The concern about carbon dioxide makes most people think that it is the most important greenhouse gas. Water is so important in so many ways; don’t be surprised that it contributes about 60% of the greenhouse heating.  It has many unusual and important properties because the H2O molecule is lopsided, its two hydrogen atoms attached to one side of the oxygen. That also makes it electrically imbalanced, a tiny electromagnet, the hydrogen side with more positive charge, the oxygen side more negative:

Being permanently lopsided, many of the longer infrared wavelengths can make it rotate at various speeds, in addition to its vibration modes. Water vapor determines the strength of the greenhouse effect and the temperature of our planet.

The Greenhouse Effect until the Industrial Revolution

Foray 37 showed that when the Sun was young and less luminous, Earth didn’t freeze over because atmospheric CO2 was much more abundant, and hence exerted a stronger greenhouse effect.  But over the last billion years, life has exerted such a demand for CO2 that it now makes up only 0.03% of our atmosphere.  Water vapor molecules are now the main greenhouse gas.

Earth’s radiation spectrum peaks at about 10 microns. This is not coincidental; its corresponding 15°C surface temperature ensures that Earth has the liquid water it needs to be a living planet. Gaia uses water vapor as an infrared filter to regulate the peak wavelength and average temperature.  Water’s bending-mode vibration soaks up most of Earth’s infrared waves shorter than 8 microns, and those longer than 17 microns are absorbed as they make water- vapor molecules rotate at various speeds. Only wavelengths between 8 and 15 microns can escape through the “water-vapor window,” sometimes called the “greenhouse window.”

Water vapor cannot be blamed for global warming because the atmosphere can hold only so much.  Any more would simply fall out as rain and snow. The problem is the carbon dioxide that human activity has been pumping into the atmosphere at prodigiously increasing rates since the 19th century – much faster than plants and animals can take it out and use.  Vapor molecules rotate at various speeds. Only wavelengths between 8 and 15 microns can escape  through the ”water-vapor window,” sometimes called the “greenhouse window.” Other  greenhouse gases from human activity include methane, nitrous oxide, ozone, chlorofluorocarbons, hydrofluorocarbons, and perfluorocarbons.

But  it is the CO2 bending vibration, encroaching into the long-wave side of the “water-vapor window,” that is most to blame.

Our next Foray explores the history of greenhouse science, and how the climate crisis came to be. – Rappler.com