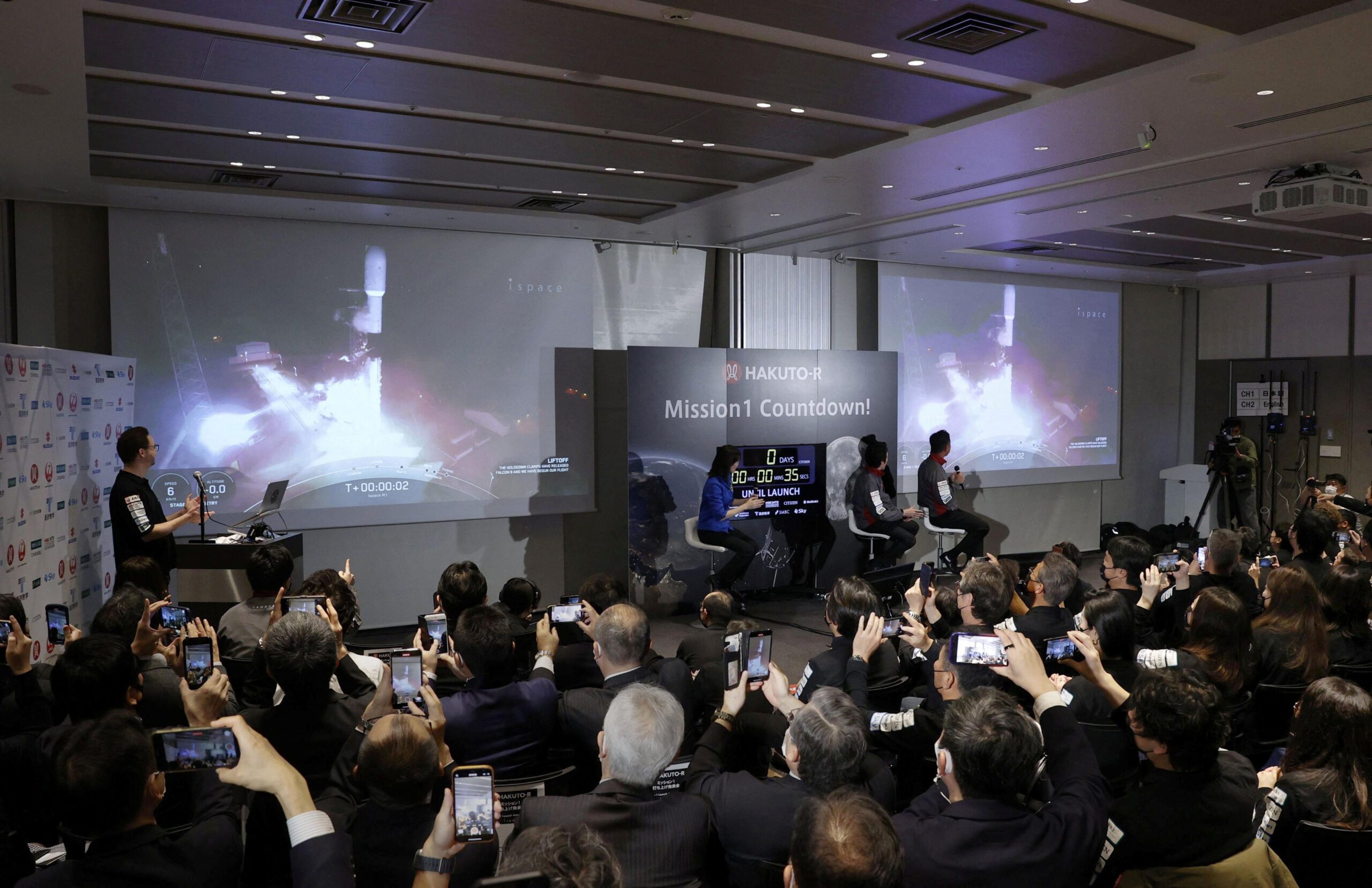 COMMERCIAL LAUNCH. Officials of ispace Inc's HAKUTO-R mission look at live broadcasting of the launch of a SpaceX Falcon 9 rocket for ispace at Cape Canaveral Space Force Station, in Tokyo, Japan on December 11, 2022.

Facebook Twitter Copy URL
Copied
The national space agencies of the United States, Russia, and China have achieved soft landings on Earth's nearest neighbor in the past half century, but no companies have

TOKYO, Japan – A Japanese space startup launched a spacecraft to the moon on Sunday, December 11, after several delays, a step toward what would be a first for the nation and for a private company.

ispace Inc’s HAKUTO-R mission took off without incident from Cape Canaveral, Florida, after two postponements caused by inspections of its SpaceX Falcon 9 rocket.

More than a hundred people at a viewing party in Tokyo roared in applause when the rocket fired and lifted into the dark skies.

“I’m so happy. After repeated delays, it’s good that we had a proper launch today,” said Yuriko Takeda, a 28-year-old worker at an electronics company who joined the gathering.

“I have this image of the American flag from the Apollo landing, so while this is just the launch, the fact that it’s a private company going there with a rover is a really meaningful step.”

The national space agencies of the United States, Russia, and China have achieved soft landings on Earth’s nearest neighbor in the past half century, but no companies have.

Mission success would also be a milestone in space cooperation between Japan and the United States at a time when China is becoming increasingly competitive and rides on Russian rockets are no longer available in the wake of Russia’s invasion of Ukraine.

It would also cap a space-filled few days for Japan, after billionaire Yusaku Maezawa revealed on Friday the eight crew members he hopes to take on a SpaceX flyby of the moon as soon as next year.

The name HAKUTO refers to the white rabbit that lives on the moon in Japanese folklore, in contrast to the Western idea of a man in the moon. The project was a finalist in the Google Lunar XPRIZE before being revived as a commercial venture.

Next year is the Year of the Rabbit in the Asian calendar. The craft, assembled in Germany, is expected to land on the moon in late April.

The company hopes this will be the first of many deliveries of government and commercial payloads. The ispace craft aims to put a small NASA satellite into lunar orbit to search for water deposits before touching down in the Atlas Crater.

The M1 lander will deploy two robotic rovers, a two-wheeled, baseball-sized device from Japan’s JAXA space agency and the four-wheeled Rashid explorer made by the United Arab Emirates. It will also be carrying an experimental solid-state battery made by NGK Spark Plug Co 5334.T.

“Our aim is knowledge transfer and developing our capabilities and to add a scientific imprint in the history of humanity,” he tweeted.

Privately funded ispace has a contract with NASA to ferry payloads to the moon from 2025 and is aiming to build a permanently staffed lunar colony by 2040. – Rappler.com