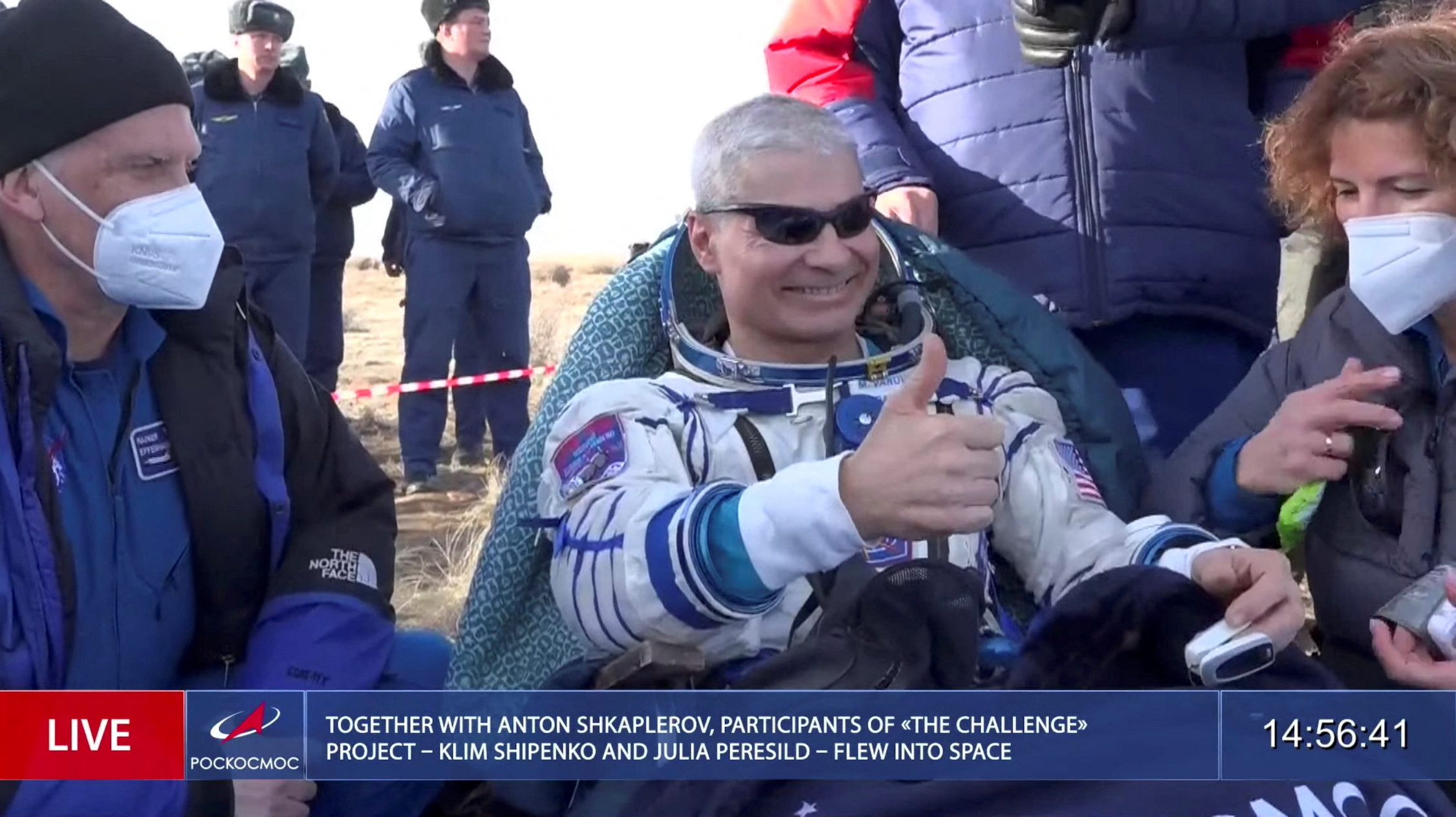 The International Space Station (ISS) crew member NASA astronaut Mark Vande Hei rests after landing with the Soyuz MS-19 space capsule in a remote area outside Zhezkazgan, Kazakhstan March 30, 2022, in this still image taken from video. Roscosmos/Handout via REUTERS ATTENTION EDITORS - THIS IMAGE HAS BEEN SUPPLIED BY A THIRD PARTY. MANDATORY CREDIT.

Facebook Twitter Copy URL
Copied
Russian space agency Roscosmos broadcasts footage of the landing from the Kazakh steppe and says a group of technical and medical specialists had been dispatched to help the astronauts out of the capsule.

ALMATY, Kazakhstan – A US astronaut and two Russian cosmonauts landed in Kazakhstan on Wednesday, March 30, after leaving the International Space Station aboard the same capsule despite heightened antagonism between Moscow and Washington over the conflict in Ukraine.

The flight – carrying NASA’s Mark Vande Hei and Russians Anton Shkaplerov and Pyotr Dubrov back to Earth – was being closely watched to determine whether escalating strife had spilled over into longtime cooperation in space between the two former Cold War adversaries.

Russian space agency Roscosmos broadcast footage of the landing from the Kazakh steppe and said a group of technical and medical specialists had been dispatched to help the astronauts out of the capsule.

Vande Hei, who at 55 is completing his second ISS mission, will have logged a US space-endurance record of 355 consecutive days in orbit, surpassing the previous 340-day record set by astronaut Scott Kelly in 2016, according to NASA.

The all-time record for longest single stay in space was set by Russian cosmonaut Valeri Polyakov who spent more than 14 months aboard the Mir space station, returning to Earth in 1995.

Dubrov, 40, who launched to the ISS with Vande Hei last April from the Baikonur Cosmodrome in Kazakhstan, will be completing his first spaceflight, sharing 5,680 Earth orbits and more than 150 million miles in space with Vande Hei, NASA said.

Dmitry Rogozin, director-general of Roscosmos, then lashed out in a series of Twitter posts suggesting the US sanctions could “destroy” ISS teamwork and lead to the space station falling out of orbit.

The following week, state-run Russian news agency RIA Novosti posted a video spoof depicting cosmonauts waving farewell to Vande Hei before Russia’s ISS module detaches from the space station and flies away without him to the applause of Russian officials at mission control, leaving the rest of the station sinking lower in orbit.

The clip, described by RIA Novosti as “comic,” plays out to the Russian-language love ballad “Goodbye,” by Russian vocalist Lev Leshchenko.

At about the same time, Rogozin announced that Russia would stop supplying or servicing Russian-made rocket engines used by two US aerospace NASA suppliers, suggesting US astronauts could use “broomsticks” to get to orbit.

NASA, for its part, has said that US. and Russian ISS crew members were well aware of events on Earth but are working professionally together without tension.

The three returning ISS crew were replaced on the space station by three cosmonauts who flew to orbit on March 18, joining the three remaining US colleagues of Vande Hei and a German astronaut from the European Space Agency.