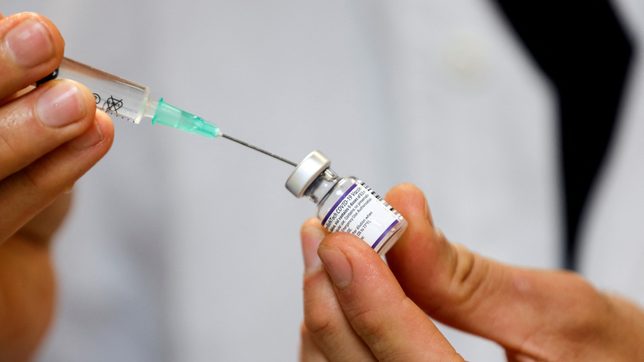 VACCINE. A medical worker prepares a dose of coronavirus disease (COVID-19) vaccine after Israel approved a second booster shot for the immunocompromised people over 60 years and medical staff, in Tel Aviv, Israel January 3, 2022.

Facebook Twitter Copy URL
Copied
Israeli Prime Minister Naftali Bennett says, 'We know that a week after administration of a fourth dose, we see a five-fold increase in the number of antibodies in the vaccinated person'

“A week into the fourth dose we know to a higher degree of certainty that the fourth dose is safe,” Bennett said at Sheba Medical Center, which is giving second booster shots in a trial among its staff amid a nationwide surge in Omicron variant infections.

“The second piece of news: We know that a week after administration of a fourth dose, we see a five-fold increase in the number of antibodies in the vaccinated person,” he told reporters.

“This most likely means a significant increase against infection and… hospitalisation and (severe) symptoms,” Bennett said in English.

Israel has played a leading role in studying the effects of COVID-19 vaccines, as the fastest country to roll out two-dose inoculations to a wide population a year ago and one of the first to give third shots as boosters. It is now administering fourth doses of the Pfizer/BioNTech vaccine to people over 60, health workers and immunocompromised patients.  – Rappler.com