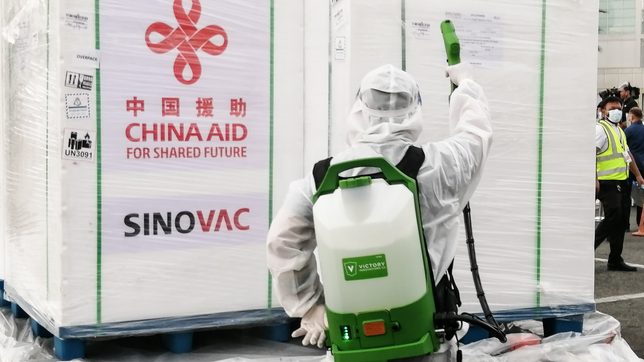 SINOVAC. Airport workers inspect and disinfect the 400K Sinovac anti COVID-19 vaccines donated by the Chinese government after its arrival at the NAIA Terminal 2 on Tuesday morning, March 24, 2021.

Facebook Twitter Copy URL
Copied
In the context of a pandemic that shows no signs of abating, what does the future hold for Sinovac?
As published bythe conversation

China’s vaccine-development system has been busy during the pandemic. Two Chinese vaccines are now being used around the world: the Sinopharm vaccine and the CoronaVac vaccine.

The latter, developed by the Sinovac Biotech company, is the latest COVID-19 vaccine to be authorized for emergency use by the World Health Organization (WHO). Because of this, the CoronaVac vaccine could have a big role to play in turning the tide of the pandemic.

Receiving the WHO’s blessing means the vaccine can now be used to supply Covax, the initiative set up to share vaccine doses across the world. This is on top of it being approved for use by 37 countries. Millions are in line to receive the vaccine, and millions already have.

However, CoronaVac’s clinical trial results have painted a mixed picture. And, as with the western COVID-19 vaccines, it’s only now that plenty of doses have been deployed that we’re beginning to get a sense of how effective the vaccine is in real-world conditions. Like the other notable Chinese COVID-19 vaccine, manufactured by Sinopharm, CoronaVac is an inactivated vaccine. This means it contains whole versions of the coronavirus that have been treated so that they can’t replicate inside the body. These dead viruses are what the body mounts an immune response to.

This is a very different approach to that used by the main western vaccines, which instead deliver some of the coronavirus’s genetic material into the body in order to get it to build specific, recognizable parts of the coronavirus for the immune system to train itself against.

The inactivated vaccine method is a much more well-established way of designing a vaccine. Inactivated vaccines are typically easy to manufacture at large scale and have an excellent safety record. However, they tend to produce a weaker immune response than vaccines that use other designs.

To some extent this is borne out in the results of CoronaVac’s phase 3 clinical trials, which were run across several countries. In a trial run in Brazil, the vaccine prevented people developing symptomatic COVID-19 with 51% efficacy. In another trial in Indonesia, the vaccine showed 65% efficacy. For comparison, the efficacy of the Moderna and Pfizer mRNA vaccines exceeded 90% in their trials.

However, CoronaVac showed very high protection against being hospitalized with COVID-19 in these trials, and almost 100% protection against dying from the disease, and it was on the basis of these findings that the WHO recommended its use. Since then, results of a further phase 3 trial run in Turkey have been published, suggesting that CoronaVac is safe and has an efficacy of 83%. Why such a difference between these percentages? Well, the prevalence of different coronavirus variants over time and in different places can potentially impact the efficacy observed in clinical trials. Studies conducted in South Africa have had to content with the Beta variant, while those run in Brazil have faced the Gamma variant. There is some evidence that these variants are less susceptible to the effects of current vaccines than some other forms of the virus.

This is where “real-world” studies become vital. By assessing vaccines as they’re being used, they allow you to look at their effectiveness and safety in larger numbers of people than is possible in clinical trials. They also give you a more up-to-date picture of how vaccines are faring against the virus in real time, as it evolves.

For example, a recent real-world study of CoronaVac conducted in Chile included data from 10.2 million people. The researchers calculated that the vaccine was 66% protective against symptomatic disease and offered 88% protection against hospitalization. They also highlighted that the alpha and gamma variants are known to be circulating in Chile, though within their study there was not enough data to estimate the impact of these variants specifically on the vaccine’s effects.

These are good numbers, but still leave the vaccine a little way behind some of the western vaccines. With Pfizer and Moderna, protection against hospitalization was close to 100% in real-world studies involving the Alpha variant, and still around 90% after two doses when considering the Delta variant. There’s also currently precious little data to assess the impact of Delta upon CoronaVac.

A working vaccine is a useful vaccine

Perhaps because of these factors, some governments seem a little unsure about the overall value of CoronaVac. For example, in Thailand, there are plans to administer the AstraZeneca vaccine as the second dose to individuals who had CoronaVac as their first dose. This was after healthcare workers still became infected with COVID-19 despite having had CoronaVac.

However, the WHO Situation Report of July 19 2021 noted that the number of COVID-19 cases reported worldwide increased by 12% in the previous week. Right now, the pandemic is growing.

There are also widespread concerns about unfolding outbreaks in many places across sub-Saharan Africa. Most countries in the continent have populations that are almost entirely unvaccinated and so greatly susceptible to new outbreaks. The tragic circumstances of the huge outbreak earlier this year in India shows how COVID-19 can wreak havoc on a susceptible population.

Therefore, in the context of a pandemic that shows no signs of abating, what does the future hold for CoronaVac? Well, in short, the world needs all the vaccines it can get, and we cannot afford to pick and choose between them. There’s good evidence that all the vaccines approved by the WHO protect against symptomatic disease, and also evidence that they in turn reduce onward transmission.

While vaccine demand continues to greatly outstrip supply and there’s huge inequity in the global vaccine rollout, there remains a big role for CoronaVac to play – even if it is slightly less effective than some other vaccines. Populations remain unprotected. Until that changes, the pandemic won’t end. – The Conversation|Rappler.com

Michael Head is a senior research fellow in Global Health, University of Southampton.