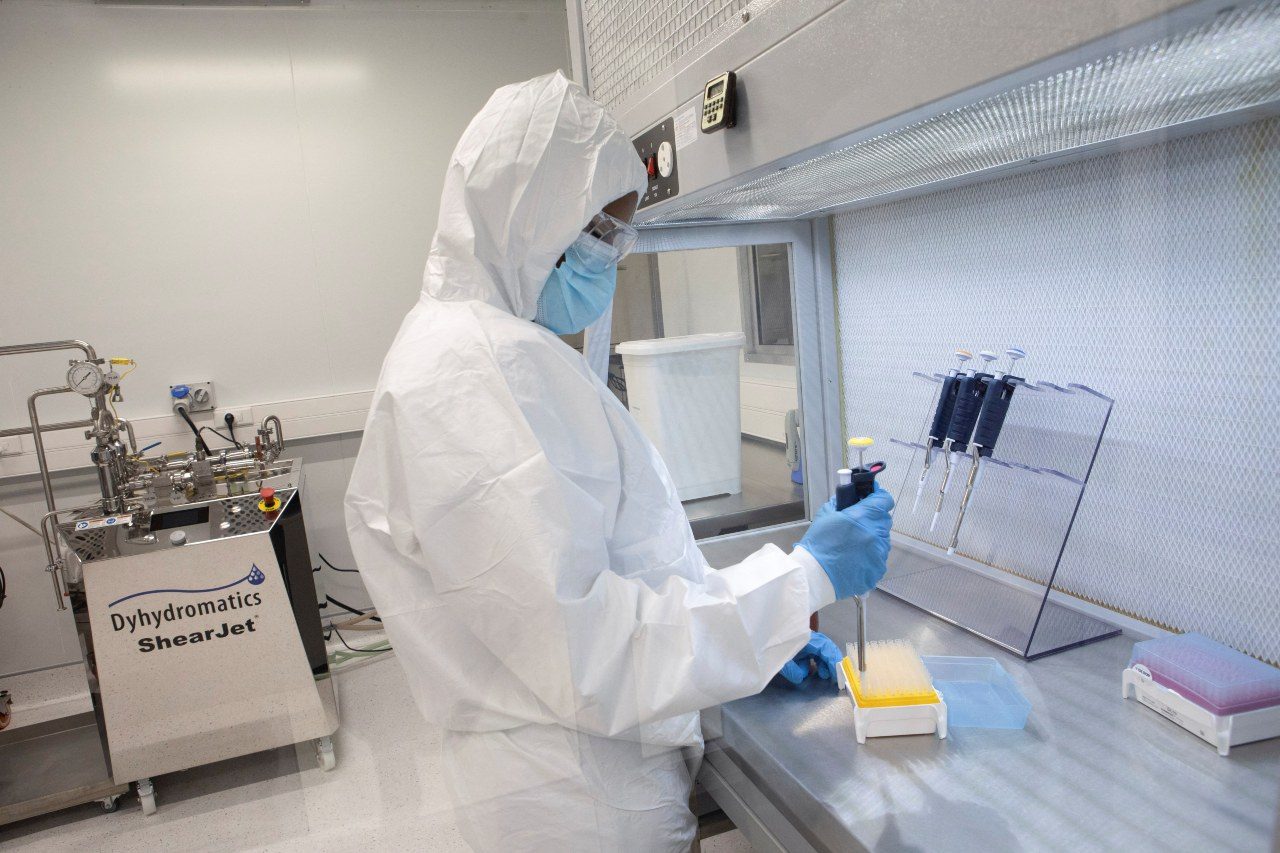 WORLD FIRST. A production scientist works with samples during a visit by representatives of the Medicines Patent Pool, France, and other European Union member states, at the Afrigen Biologics' site in Cape Town, South Africa, on February 3, 2022.

CAPE TOWN, South Africa – South Africa’s Afrigen Biologics has used the publicly available sequence of Moderna Inc’s mRNA COVID-19 vaccine to make its own version of the shot, which could be tested in humans before the end of this year, Afrigen’s top executive said on Thursday, February 3.

The vaccine candidate would be the first to be made based on a widely used vaccine without the assistance and approval of the developer. It is also the first mRNA vaccine designed, developed and produced at lab scale on the African continent.

The World Health Organization (WHO) last year picked a consortium including Afrigen for a pilot project to give poor and middle-income countries the know-how to make COVID vaccines, after market leaders of the mRNA COVID vaccine, Pfizer, BioNTech and Moderna, declined a WHO request to share their technology and expertise.

The WHO and consortium partners hope their technology transfer hub will help overcome inequalities between rich nations and poorer countries in getting access to vaccines. Some 99% of Africa’s vaccines against all diseases are imported and the negligible remainder manufactured locally.

During the pandemic, wealthy countries have hoovered up most of the world’s supplies of vaccines.

Biovac, a partly state-owned South African vaccine producer, will be the first recipient of the technology from the hub. Afrigen has also agreed to help train companies in Argentina and Brazil.

In September, the WHO’s hub in Cape Town decided to go it alone after failing to bring on board Pfizer and Moderna, both of which have argued they need to oversee any technology transfer due to the complexity of the manufacturing process.

Moderna had no immediate comment on Afrigen’s announcement on Thursday.

Moderna’s vaccine was chosen by the WHO due to an abundance of public information and the company’s pledge not to enforce patents during the pandemic. It’s not clear what will happen after the pandemic ends and whether the company will try to enforce them again.

“If this project shows that Africa can take cutting edge technology and produce cutting-edge products, this will banish this idea that Africa can’t do it and change the global mindset…this can be a game-changer,” Charles Gore, executive director at MPP, told Reuters at Afrigen’s facility, a converted warehouse.

Under pressure to make drugs in lower-income countries, Moderna and BioNTech have announced plans to build mRNA vaccine factories in Africa, but production is still a long way off.

“We haven’t copied Moderna, we’ve developed our own processes because Moderna didn’t give us any technology,” Petro Terblanche, managing director at Afrigen, told Reuters.

“We started with the Moderna sequence because that gives, in our view, the best starting material. But this is not Moderna’s vaccine, it is the Afrigen mRNA hub vaccine,” Terblanche said.

She later took a delegation of EU diplomats on a tour of the state-of-the-art facility where scientists were seen making mRNA in sterile white-walled rooms.

She said it had managed to make, in collaboration with Johannesburg’s University of the Witwatersrand, its first microliter laboratory scale batches of COVID mRNA vaccines at the Cape Town facility.

Terblanche said Afrigen was also working on a next generation mRNA vaccine that didn’t need freezing temperatures for storage, required for the Pfizer and Moderna doses, and which would be better suited to Africa, which is often dealing with high temperatures and poor health facilities and infrastructure.

“We will only make our clinical trial batch probably in six months from now, (meaning) … fit for humans. And the target is November 2022,” Terblanche added.

Online training for other companies to make the shot started with manufacturers in Brazil and Argentina last year. Afrigen expects to get more on board within the next month. – Rappler.com