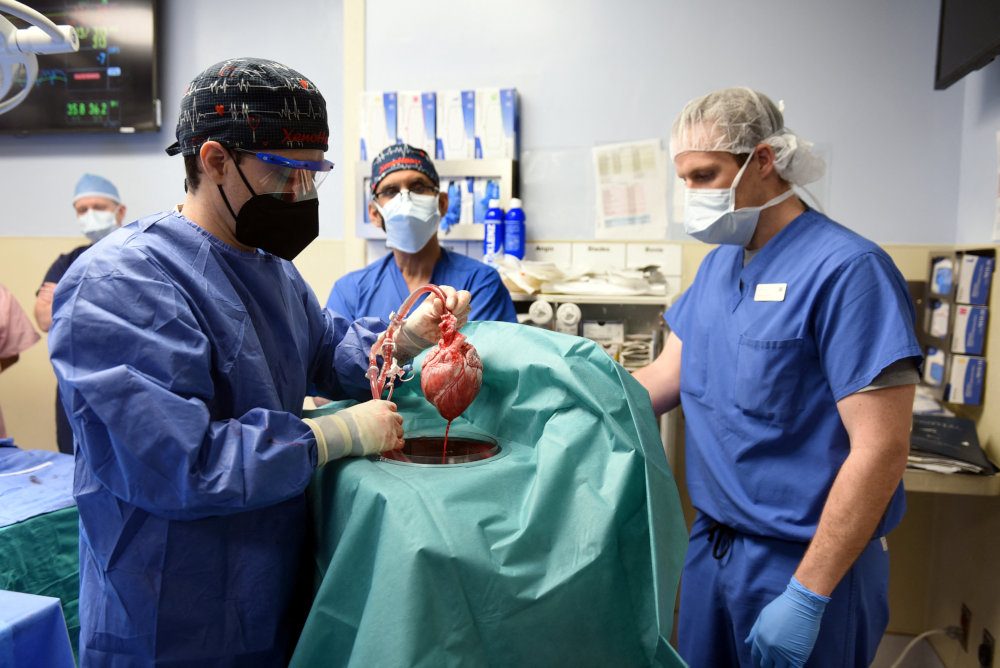 TRANSPLANT. Surgeon Muhammad M. Mohiuddin, MD leads a team placing a genetically-modified pig heart into a storage device at the Xenotransplant lab before its transplant on David Bennett, a 57-year-old patient with terminal heart disease, at University of Maryland Medical Center in Baltimore, Maryland, U.S. January 7, 2022.

University of Maryland School of Medicine (UMSOM)/Handout via Reuters

Facebook Twitter Copy URL
Copied
The surgery is among the first to demonstrate the feasibility of a pig-to-human heart transplant, a field made possible by new gene editing tools 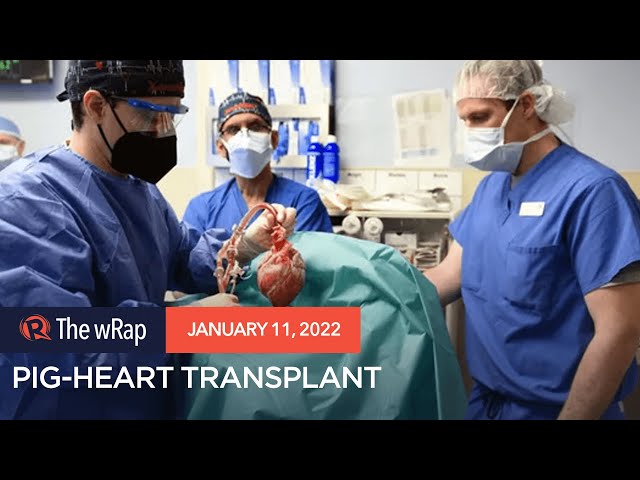 CHICAGO, USA – A US man with terminal heart disease was implanted with a genetically modified pig heart in a first-of-its-kind surgery, and three days later the patient is doing well, his doctors reported on Monday, January 10.

The surgery, performed by a team at the University of Maryland Medicine, is among the first to demonstrate the feasibility of a pig-to-human heart transplant, a field made possible by new gene editing tools.

“This was a breakthrough surgery and brings us one step closer to solving the organ shortage crisis. There are simply not enough donor human hearts available to meet the long list of potential recipients,” Dr. Bartley Griffith, who surgically transplanted the pig heart into the patient, said in a statement.

“We are proceeding cautiously, but we are also optimistic that this first-in-the-world surgery will provide an important new option for patients in the future,” Griffith added.

For 57-year-old David Bennett of Maryland, the heart transplant was his last option.

“It was either die or do this transplant. I want to live. I know it’s a shot in the dark, but it’s my last choice,” Bennett said a day before his surgery, according to a statement released by the university.

To move ahead with the experimental surgery, the university obtained an emergency authorization from the US Food and Drug Administration (FDA) on New Year’s Eve through its compassionate use program.

“The FDA used our data and data on the experimental pig to authorize the transplant in an end-stage heart disease patient who had no other treatment options,” said Dr. Muhammad Mohiuddin, who heads the University’s program on xenotransplantation – transplanting animal organs into humans.

About 110,000 Americans are currently waiting for an organ transplant, and more than 6,000 patients die each year before getting one, according to organdonor.gov.

Bennett’s genetically modified pig heart was provided by Revivicor, a regenerative medicine company based in Blacksburg, Virginia. On the morning of the surgery, the transplant team removed the pig’s heart and placed it into a special device to preserve its function until the surgery.

Pigs have long been a tantalizing source of potential transplants because their organs are so similar to humans. A hog heart at the time of slaughter, for example, is about the size of an adult human heart.

Other organs from pigs being researched for transplantation into humans include kidneys, liver and lungs.

Prior efforts at pig-to-human transplants have failed because of genetic differences that caused organ rejection or viruses that posed an infection risk.

Scientists have tackled that problem by editing away potentially harmful genes.

In the heart implanted in Bennett, three genes previously linked with organ rejection were “knocked out” of the donor pig, and six human genes linked with immune acceptance were inserted into the pig genome.

The work was funded in part with a $15.7 million research grant to evaluate Revivicor’s genetically-modified pig hearts in baboon studies.

In addition to the genetic changes to the pig heart, Bennett received an experimental anti-rejection drug made by Kiniksa Pharmaceuticals based in Lexington, Massachusetts. – Rappler.com