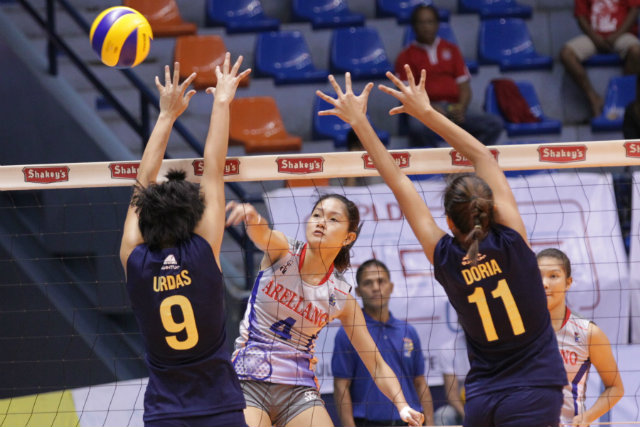 MANILA, Philippines — The Arellano University Lady Chiefs survived a 20-point blast from Jaja Santiago and handed National University its first loss with a 25-23, 25-18, 19-25, 25-22 victory in the Shakey’s V-League 12 Collegiate Conference on Saturday, July 25 at the FilOil Flying V Arena in San Juan.

Danna Henson added 10 points including 3 aces and Shirley Salamagos had 9 as the Lady Chiefs rebounded from a tough 4-set upset from Far Eastern University last week to improve its record to 2-1 in Group A.

(It feels good of course. This is our first time to beat NU but we saw they were undermanned as well.)

The reigning NCAA champions took full advantage of an NU side without guest player Dindin Santiago and skipper Myla Pablo, who are all with the national team competing in the VTV Cup in Vietnam starting Saturday.

The towering Santiago carried the Lady Bulldogs, scoring on 15 spikes and 3 blocks. She was backed up by Aiko Urdas’ 14 points that included 3 blocks and two aces, and Jorelle Singh’s 11 points on 10 kills.

But aside from limited personnel, Javier admitted also capitalizing on having 4 former Lady Bulldogs on his V-League line-up to familiarize themselves with NU’s play.

(I fielded them in because they know how NU plays. Through them, we figured out what to do. I told them this is a test for us. We haven’t won against them ever.)

NU was unstable and disorganized for most of the match, unable to find holes in Arellano’s floor defense and generally having a difficult time getting themselves in position. The Lady Bulldogs gave up 41 errors while the Lady Chiefs limited theirs to 28.

Arellano setter Rhea Ramirez outplayed ace setter Ivy Perez, 21-16, as Perez struggled with the second ball, which resulted to a number of miscues with spikers.

The Lady Bulldogs finished strong in the third set to avert a sweep and kept in step with their foes through the fourth.

But they could not pull away as they piled up on errors each time they gained momentum and allowed Arellano to keep coming back.

Neither Arellano nor NU led by more than two points in the fourth until a Sagun attack gave the Lady Chiefs its biggest lead in that set, 23-20, which spelled the end for the likewise 2-1 Lady Bulldogs.