FEU cruises past PUP to stay unbeaten in V-League

Jul 25, 2015 5:31 PM PHT
Jane Bracher
Facebook Twitter Copy URL
Copied
Far Eastern University had no trouble at all on their way to sweeping Polytechnic University of the Philippines, as Bernadeth Pons scores 13 and Jovelyn Gonzaga adds 10 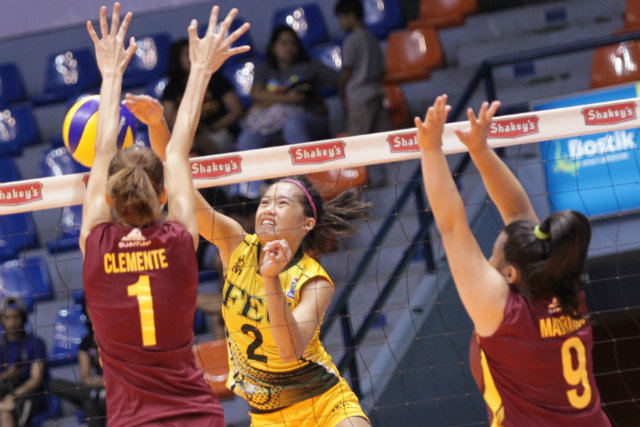 MANILA, Philippines — Far Eastern University had no trouble at all on their way to sweeping Polytechnic University of the Philippines, 25-16, 25-14, 25-14, to maintain its clean slate in the Shakey’s V-League 12 Collegiate Conference on Saturday, July 25 at the FilOil Flying V Arena.

Bernadeth Pons led the rout with 13 points she culled from 11 attacks and a couple of service aces. Guest player Jovelyn Gonzaga added 10 points as the Lady Tamaraws notched their third straight victory in as many games to top Group A standings.

(The kids played okay but they still matched the pace of our opponents. We had plenty of errors with our services. This last set we managed to minimize that. We need to be more complete as a team because we still get lost in set plays.)

Mary Joy Palma added 8 points and 3 blocks as Honey Royce Tubino and Toni Rose Basas each had 6 points for the surging FEU, which tallied only 7 errors.