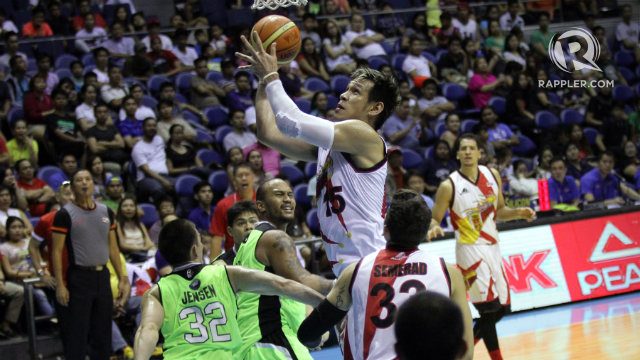 Facebook Twitter Copy URL
Copied
June Mar Fajardo has established himself as a force in the PBA. Ginebra coach Tim Cone thinks he could be a strong force in the NBA Summer League as well

While he was there, he found time to speak with Jim Kelly, a scout for the Dallas Mavericks, who brought up an interesting question about reigning two-time PBA MVP June Mar Fajardo.

Cone told Kelly that Fajardo is currently dominating the scene of Philippine basketball, which piqued the Mavericks scout’s curiosity in the 6-foot-11, 25-year-old player.

“I was talking to some of the NBA scouts and Jim Kelly was one of them and I was talking about June Mar, [saying], ‘He’s just dominating our league right now.’ And he says, ‘So how do you think he’d do here in the Summer League?,’” Cone shared during his introductory press conference as Ginebra’s new coach.

“I said, ‘You know, you give him a little bit of time, you give him a few weeks, or a month or so, to work out with these guys, he’ll come in and he’ll be one of the best big men here in the Summer League.”

The Summer League, though clearly nowhere close to the level of talent in the NBA itself, still has viable competition with NBA rookies and sophomores, NBA D-League players, and journeymen who have played in many leagues and are looking to make it to the NBA.

“He would’ve been one of the best big men there,” Cone said about Fajardo in the Summer League.

“Again, it’s about of the adjustment and getting used to playing with those really good NBA players, not being intimidated by their athleticism. But, like Bobby Ray [Parks], once he got in and got a feel for them, he really, really picked up his game and he belonged.”

“I think June Mar would take that to a whole new level,” Cone said.