Arellano coasts to easy win over hapless University of Batangas 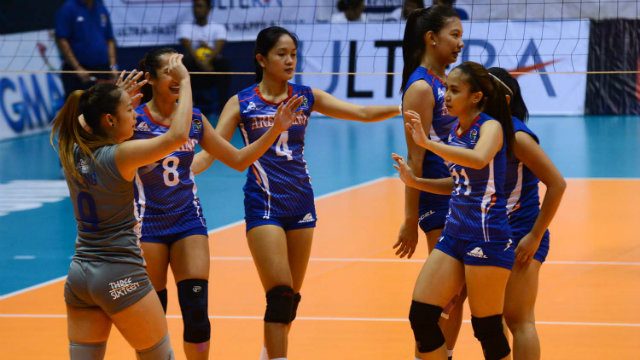 MANILA, Philippines — Arellano University destroyed University of Batangas in the opening set and never looked back on their way to a 25-4, 25-23, 25-16 sweep in the Shakey’s V-League 12 Collegiate Conference on Saturday, August 1 at the FilOil Flying V Arena in San Juan.

Cristine Rosario topscored with 12 points and Menchie Tubiera added 10 as the reigning NCAA champions improved to 3-1 in Group A.

Jovielyn Prado and Danna Henson contributed 9 and 8 markers, respectively, for the Lady Chiefs which blasted the NCAA-South champions 25-4 in the first set. UB kept it close in the second frame but fell short a week after winning their first set in the tournament.

Despite the dominant win, Arellano head coach Roberto Javier was unhappy with the way the Lady Chiefs played.

“Hindi maganda kasi kitang kita yung team ko nag-relax. Sobrang relaxed (It was not good because it was obvious my team relaxed. They were very relaxed),” he said after the game.

Javier was specifically not satisfied with the second set, where the Lady Chiefs barely scraped by and won by only two points.

“Over-confidence. They underestimated the opponent and they relaxed in the second set,” Javier said in Filipino. “That was not acceptable for me.”

Arellano has University of the Philippines as its last assignment on Saturday, August 8 as they aim to finish the eliminations on a 3-game win streak and solidify their quarterfinals seeding. The top 4 teams from each group will advance to the playoffs.

Krissa Madalogdog and Kimberly Jamilla led UB with 9 and 6 points, respectively. The Lady Brahmans remain winless in 4 outings and are on a collision course with the likewise hapless Polytechnic University of the Philippines for their last game. — Rappler.com