Ironman athletes: ‘Cebu is the Disneyland of racing’ 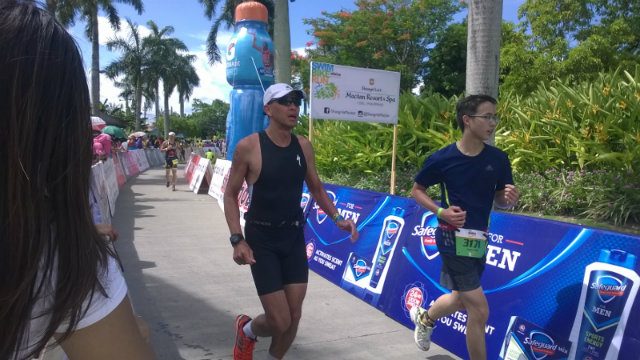 Facebook Twitter Copy URL
Copied
Competitors in the recently concluded Ironman 70.3 said the support of Cebu fans make the experience a memorable one

CEBU CITY, Philippines—Thousands lined up at the side of the roads to cheer during race day at the Cobra-Ironman 70.3 triathlon last August 2—a sight few international athletes get to see anywhere in the world.

It is this crowd that is making them come back to join the Cebu leg, according to both rookie and returning professional athletes who are part of the swim-bike-run series held in different cities in the world.

“I could never ever see more spectators on the side of the road than I did today, It was such a truly amazing country. Thank you guys so much,” said Beth Gerdes of the USA, who finished second in the Cebu leg of the women’s Ironman event.

For retiring 70.3 Ironman professional athlete Belinda Granger of Australia, the last 5 years racing in Cebu has changed her life. She keeps coming back because of the people’s hospitality, she said.

“The last 5 years has made a huge impact of myself. That is why I continue to come back here every year. And I can tell you without a doubt as I have raced around the world, that this is one of the best countries in the world to race in the whole planet,” said a teary-eyed Granger during the Meet the Champs post-race press briefing at the Marquee in Shangri-la’s Mactan Island Resort and Spa.

“I was talking to a really nice guy and I think he was English and he is from the UK. I was at the end of the race and I was eating ice cream and he said: You know what, this is the Hollywood of triathlon, It’s like Disneyland here. And I said it was perfect and it’s a perfect way to describe these place.”

Granger, 45, who landed in the top 10 of the World Ironman Championships 5 times, raced her last Ironman 70.3 as a professional athlete but will “find a way to race again in Cebu” as a guest.

“I don’t want to give up. I mean, if I still can continue racing I would still continue to race here for the rest of my life. I had such a wonderful time. This is my fifth year racing for this particular race but of course I have been coming here to the Philippines at least three or four times for 5 years now. Even though I man not coming back to race but I will find a way to come back here…I could not imagine my year without coming back to the Philippines .“

Fellow Australian Dimity Lee Duke, 32, said that the cheering crowd has “pumped” her desire to win the race. It was her first time to race in Cebu 70.3 Ironman triathlon.

“I am pretty pumped up. The Filipino people is making it such a truly amazing race and I apologize to everyone if I didn’t able to give you a high five or anything like that. Thank you so much for the opportunity and I will see you next year.”

Fred Uytengsu, President of the Sunrise Events Incorporated said that a few surprises will be in store next year especially that Cebu will be hosting the Asia-Pacific Finals of the World Ironman Championships. What makes it special for this year’s race was the crowd that lined up in the streets doubled.

“We really thank the Cebuanos for really making our races special,” he said.

Uytengsu said that the roads needed to be improved, however, and portions of the race need to be also spectator-friendly so as to avoid mishaps just like what happened to Caroline Steffen in the bike course when she crashed.

“The roads still needs to be perfect and we need to make the race more spectator friendly and we need to pay attention details on some areas,” he said. “I think there are some parts of the course that we need to make better division, on the bike race in particular and minimize some mishaps.

Uytengsu will ask pros to help out in improving some of the race courses.

“These are some of the details and we just need to make it better every year.

“We have a duty and obligation to host the Asia Pacific Championships for our athletes and make the Philippines proud.” – Rappler.com