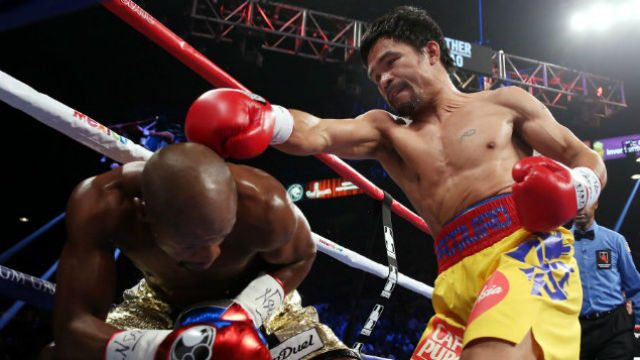 Facebook Twitter Copy URL
Copied
'It's God's work. I never saw a doctor. I never did rehab,' Manny Pacquiao says of his recovery

MANILA, Philippines – Manny Pacquiao has declared that his injured shoulder is totally healed, reflecting his eagerness to return to the ring.

In an interview with Philippine Star’s Quinito Henson, boxing’s only 8-division world champion revealed that he is fully recovered from a torn rotator cuff that he suffered during his heavily-hyped showdown versus Floyd Mayweather Jr this past May.

“I’m fine. It’s God’s work. I never saw a doctor. I never did rehab. All I did was to swim in the sea as often as I could. The salt water healed my wound,” Pacquiao said.

“Manny has strong faith. God did it. And all that swimming in the sea helped. Now, there’s talk of his comeback fight,” Pineda stated.

Pacquiao injured his right shoulder 3 weeks before the highly-anticipated encounter with Mayweather and was forced to take several days off from sparring as he nursed the aforementioned ailment.

An MRI exam subsequently showed a rotator cuff tear on Pacquiao’s shoulder, but his camp opted to proceed with the fight since he made good progress in the gym and looked like he could still compete.

While Mayweather landed 148 of 435 punches during the 12-round title unification tussle, Pacquiao connected with just 81 of 429 as his aggressive style was neutralized by his opponent’s flashy defense and ring generalship.

According to Pacquiao, the shoulder injury limited him from throwing more shots against the sport’s pound-for-pound king.  (READ: Pacquiao says shoulder injury hindered him vs Mayweather)

Pacquiao had surgery on his injured right shoulder 4 days after the blockbuster bout with Mayweather.

Pacquiao downplayed the criticism that he received from his promoter and stressed that his situation was improving.

Although Pacquiao is lobbying for a rematch with Mayweather in early 2016, the leading candidate to face the Pinoy pugilist in his in-ring comeback is Amir Khan, who once trained under the tutelage of Freddie Roach before acquiring the services of Virgil Hunter. – Rappler.com